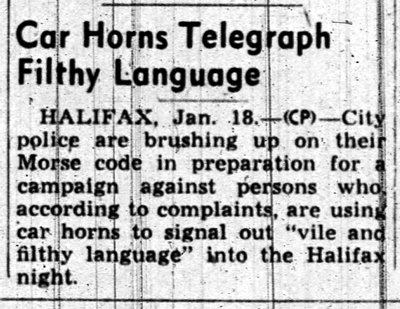 
Comments
As it so happens, I'm in the process of learning Morse code. I got into ham radio a few years ago. So it's been a natural, downhill progression to the point that I already own one telegraph key, and a second one is on order.

As soon as I get good at it, I might just have to go on a late night tooting ride myself. I'll let everyone know what I think of them in a very indirect and not-readily-understood manner. That'll show 'em.


A telegraph key sounds much too efficient for these modern times. There must be a way to do this beginning by texting it on your cell phone.

My Boy Scout Morse is too rusty to follow you, Robb.
Posted by Virtual on 12/09/16 at 11:06 AM
If one wants to get fancy, they can hook their computer up to their radio. There are all kinds of things you can do with that, including sending email via radio, which can then continue on its way through the internet. And depending on the recipient, it might then get delivered via radio, too.

And that was "poopheads" in glorious Morse.
Posted by Robb of Warren on 12/09/16 at 11:20 AM
Surprising how at one time the amateur radio license required knowledge of Morse code. Then the requirement was dropped. I assume that it is coming back among operators from Robb's comments. Some things, like vinyl record albums, are so basic that they cannot fail to function when all the other fancy equipment that took their place goes belly up.
Posted by KDP on 12/09/16 at 01:45 PM
I wouldn't say Morse is making a come back as much as it never went away. Although the hobby of amateur radio is on the decline, there's always been a fondness for Morse code. And there are practical reasons for its popularity, too. The main thing being that while voice communication is good, it is more susceptible to interference than Morse code. Dots and dash are far less subtle than speech. Also I believe Morse code can be generated with a simpler transmitter - no fancy modulation required, just produce a constant tone and turn the transmitter on and off.

Additionally there are some grumpy older men that think it's a travesty the code requirement for licensing was dropped. I even know of one or two that use Morse code almost exclusively.
Posted by Robb of Warren on 12/09/16 at 03:57 PM
Robb: 5318008!
Posted by Richard Bos on 12/10/16 at 02:53 PM
Commenting is not available in this channel entry.