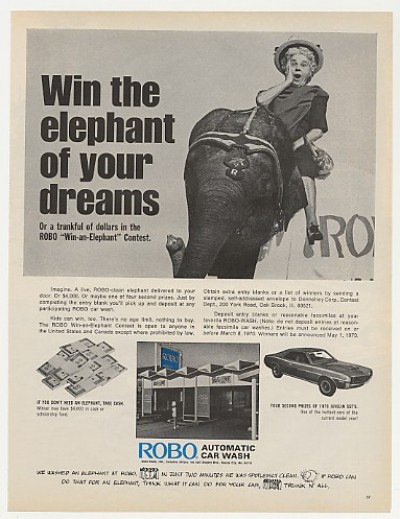 Remember when Bart Simpson won a radio contest and had to choose between a live elephant and lots of cash--and he chose the elephant?

I wonder if that happened back in 1970, when this contest ran?

I wish I could find a better scan to read the fine print. But the first sentence seems to promise the winner a real beast if desired.


Comments
Click here for a good version of the ad with text even a geriatric case can read.

There was a lot of this silliness going around back then. One Dodge? dealer near my home town was selling western hats for $3,500 (or some such) and giving you the pick-up underneath it for free!
Posted by Expat47 in Athens, Greece on 01/17/13 at 08:50 AM

I grew up on the Left Coast and one who comes to mind with such an over the top advertising campaign is CAL WORTHINGTON AND HIS DOG 'SPOT'!

Well sleuthed, Expat!
Posted by Paul on 01/17/13 at 09:46 AM
Both of the ads,(Much clearer on Expat's link) Say they washed the elephant at ROBO. Did they mean they ran it thruogh the machine? Wonder what PETA, HSUS, and the ASPCA would think of that?! :coolsmile:
It does seem like something CAL WORTHINGTON would do! :lol:
Posted by Tyrusguy on 01/17/13 at 10:06 AM
One thing I took away from the ad was that $4,000 was the 1st prize but 4 new cars were 2ed prized! And, IIRC, my '69 Mustang didn't even cost $3,000 and today there's a $5,000 gas guzzler tax on one!
Posted by Expat47 in Athens, Greece on 01/17/13 at 10:23 AM
Timmy "I wish I had enough money to buy an elephant!"
Mommy "Why do you want an elephant?"
Timmy "I don't want an elephant, I just want enough money so I could." 😊
Posted by BMN on 01/17/13 at 11:05 AM
On an early episode of The Price is Right, the show offered an elephant as a comic extra prize. On camera, they used a papier-mache replica, figuring the winner would prefer cash. But the prize was won by a Texas rancher who liked the idea of owning an elephant and they had to have one shipped from Africa.
Posted by Phred22 on 01/17/13 at 01:01 PM
Most automatic car washes back then also had the wands like you find at self-service for people who wanted to wash campers, boats, and other things that wouldn't fit through the machine. I'm reasonably certain that's what they used to wash the elephant.

I've heard (but haven't seen any authoritative cites) that Let's Make a Deal had occasional problems when someone wanted one of the Zonks. For the show, they borrowed animals from a local zoo, and finding one for sale was a complicated and expensive proposition.
Posted by Phideaux on 01/17/13 at 01:13 PM
On Wiki, a basic 1968 Javelin was $2,743.00. The SST was the deluxe model.
Posted by BMN on 01/17/13 at 04:50 PM
Now that we're discussing cars and elephants:

What's the similarity between cleaning out a car's interior, and an elephant blowing its nose?

In both cases, the trunk gets cleared.