Too many fingers, too many hands, too many arms, too many legs
News of the Weird has been here before with Body Integrity Identity Disorder (and if it's a sexual thing, especially a man whacking his stuff off while still intending to remain a male, it's apotemnophilia), but this latest report also expands the field: people who long to be paralyzed (maybe so they can be confined to cool wheelchairs!) and people who want to be blind or deaf. The continuing crisis for BIID'ers is that it's hard to get a doctor to help them meet their goals (what with that "do no harm" deal), leaving the solution to "self-help" or, um, "undocumented" physicians. (Related point, from previous News of the Weird coverage: There are "members of the deaf community" who so love being deaf that they prefer deaf babies, and, if that fails, refuse suggestions for Cochlear implants that would open a lifetime of sound to the kid.) Bizarre magazine
Comments 'body_integrity'

Update: It was mostly peaceful this last week in Israel and the West Bank (well, except for an internal-Christian smackdown in that church in Jerusalem)
We're forced to report periodically on the brawls inside the massive Church of the Holy Sepulchre, which was built on the ground where Jesus was supposedly crucified and where six Christian denominations share worship space while they each continually dream of the day when the other five will just go away. Two major problems between the sects: (1) The centuries-old series of edifices almost never get upgraded, and rarely repaired, because every part of the infrastructure seems to run through multiple sects' sectors, and there's little cooperation. (One decrepit wooden ladder attached to a ledge above the entrance has been there since the 1800s.) (2) The denominations celebrate different holy days differently, so you get lots of Egyptian coptics, say, herding through the place while Armenian monks, say, aren't celebrating anything in particular, and then the complaints start about how unruly one group is compared to another, nyah nyah nuh nyah-nyah. (Bonus, of course: When they brawl, it's Muslim Jerusalem police officers who have to come in and calm down the Christians.) BBC News /// BBC News [an October skirmish] /// NOTW M061 (6-8-2008) /// NOTW M042 (1-27-2008) [almost precisely the same problem, occurring at the Church of the Nativity, in Bethlehem]
Comments 'holy_sepulchre'

People Whose Sex Lives Are Worse Than Yours
Ryan Bailey, 32, was arrested in Indiana, charged with sexually assaulting an Amish man, with the explanation that he was actually out hunting for an Amish woman to sexually assault but couldn't find one and so had to settle. Associated Press via Indianapolis Star
Comments 'ryan_bailey'

Your Daily Jury Duty
[no fair examining the evidence; verdict must be based on mugshot only]
Salvador Solis, 40, arrested after reacting to what he felt was poor customer service at a massage parlor. Houston Chronicle
Comments 'salvador_solis'

More Things to Worry About on Tuesday
[Oh, there are certainly a few things to worry about today; see the Afternoon post.]

Angry dogs (lacking fists) have no choice but to bite, but then sometimes angry humans prefer biting, like this Pennsylvania man who was stewing about Obama (or this Univ. of Florida fan who was ticked that her husband had dissed the Gators). Times Leader (Wilkes-Barre) /// WJXT-TV (Jacksonville)

A hard life's work: 73 yrs old, a house with 100 tons of rubbish (including six dog skeletons). (Bonus: As the local gov't cleaning crew was called in, he got all upset with a neighbor for being critical of his untidiness.) Daily Mail

Little House on the Prairie reruns on TV in Finland must be rated "adults only" (Seriously) (But only because the gov't charges producers too much money to screen each program and put an age rating on it, so if you bypass that, you get "adults only"). Reuters

Recurring and recurring: Another British local council (Salisbury) says that from now on, everybody use "colour visual impairment" because the common term for that would offend blind people (whereupon the Royal Nat'l Institute for the Blind got offended that anyone would think such a stupid thing would offend them). Daily Telegraph

Best Weekend Mugshots: Not sure about the specific crime (but it probably wasn't "tax fraud on collateralized adjusted debt obligations") [The Smoking Gun] /// Once again, Chattanooga street meat (especially numbers 8 and 10) [The Chattanoogan]

Professor Music's Weird Link o' the Day
The Craziest Shoes from Around the World (from "Barbara"'s ShoeMi.com blog) Part One /// Part Two

How much for this shirt? 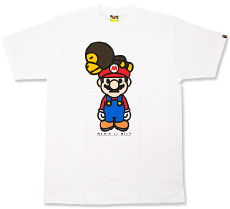 How much would you pay for this t-shirt? Before answering, consider that it shows the Nintendo character Mario with an ape on his head. Surely that's worth something.

Also, consider that it's produced by the trendy Japanese clothing company A Bathing Ape (aka Bape), founded by designer Tomoaki "Nigo" Nagao. Some info about him from Wikipedia:


After studying fashion editing at college, he worked as an editor and a stylist for Popeye magazine. After borrowing four million yen from an acquaintance, who also let him use his shop, he opened "Nowhere", his first store, on April 1, 1993 in Harajuku, Tokyo. Deciding to start his own brand, he named it after the 1968 film Planet of the Apes. According to Nigo, the name "A Bathing Ape" is short for a Japanese saying "bathing in lukewarm water". Japanese people typically have daily baths in water at temperatures above 40 degrees celsius (104°F). As such, bathing in luke warm water is to complacently over indulge. This is, ironically, a reference to the lazy oppulence of the younger generation of Japanese, the brand's own customers.

So how much would you be willing to pay for it? Unless your answer is $175 or more, you're not going to have it. Anyway, they're already sold out.

What is this a list of? (The answer is in extended, and on the comments page.)

Historic Obama? How about Stu Rasmussen?
Stu was elected mayor of Silverton, Ore. (pop. 7,400, about 15 miles east of Salem). He's all-man, except that he always wears women's clothes and hairstyles (and a bra over his implants): America's first openly transgendered mayor. Apparently, his girlfriend's OK with that. KGW-TV (Portland)
Comments 'stu_rasmussen'

People Whose Sex Lives Are Worse Than Yours
Mr. Cody Williams, who was discovered in Avila Beach, Calif., naked, face down over the windshield of an occupied taxicab, practicing movements that he'd be using in the (unlikely) event he ever got a girlfriend. San Luis Obispo Tribune [2nd story]
Comments 'cody_williams'

Your Daily Jury Duty
[no fair examining the evidence; verdict must be based on mugshot only]
They say Carl Johnson, 68, was carrying several weapons that can't be carried on high school grounds, but it's possible there's just a misunderstanding. Austin American-Statesman
Comments 'carl_johnson'

The Terrell Tribune (in Terrell, Tex., pop. 13,000, 30 miles east of Dallas) made the news last week by (a) not reporting Obama's historic victory atop page 1 but (b) instead headlining a county commissioner's race ("We run a newspaper, not a memory book service," said the publisher). WFAA-TV (Dallas-Fort Worth)

In Turkey, Obama's victory was bad for sheep: 44 got the knife because, of course, some Muslims celebrate by sacrificing animals. Associated Press via Fox News

To end complaints about discrimination, Sweden will start furnishing free prosthetic penii to F-to-M transsexuals just like the health service furnishes free breasts and wigs to M-to-F's. (Negative bonus: The prosthetics are just for show; they don't actually work) The Local (Stockholm)

Looks like Mark Castillo, awaiting trial for drowning his three kids, is holding up his wife's pending divorce . . over the matter of his "share" of all the sympathy money the public has been sending her. Washington Post

A police federation official in Britain complained about the paperwork, including a 7-page form for starting surveillance on someone, even if you're just watching him with binoculars. Daily Telegraph

The British academic publisher Routledge announced a new scholarly journal and blog, Celebrity Studies, for pieces like what impact do celebrity suicides have on society, and, y'know, why in the world would "Jessica Alba" get more search hits than "Chuck Shepherd"? Daily Telegraph

There might be something to those Third World cultural beliefs that your name is your destiny because the murder victim, in a Richmond, Va., drug shooting, was Mr. Marijuana Thompson. WWBT-TV (Richmond)

Comments on More Things to Worry About on Monday?
Comments 'worry_081110'