Neil Keller is "obsessed with Jews." He claims to have "one of the largest collections of Jewish memorabilia on the planet with over 15,000 items." Some trivia from his site:


Elvis Presley's mother, Gladys Love Presley, has a Star of David at her tombstone. Many people consider Elvis is Jewish. There is evidence that Abraham Lincoln and Christopher Columbus are Jewish and I am currently researching them.
Strangely, Neil doesn't say if he himself is Jewish.

Can you say you've ever really lived until you've attended a Musical Saw Festival? July 2009 is just around the corner, folks! 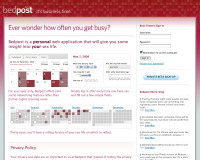 Bedposted.com is a web application with only one purpose: to allow you to track how often you "get busy". "Simply log in after every time you have sex and fill out a few simple fields."

I can think of many ways that keeping track of this kind of info could backfire on someone.

I believe that the social psychologist Leon Mann was one of the first to describe the phenomenon of the "baiting crowd." He did so in a 1981 article in the Journal of Personality and Social Psychology:


We assume that most people are concerned for the life and well-being of others. It comes as a surprise to learn that crowds gathered at the site of a suicide threat have been known to taunt and urge the victim to jump... In my examination of the baiting phenomenon, I searched all listings for suicides and suicide attempts in the New York Times Index for 1964-1979... The following extract from the New York Times for June 8, 1964, is an example of the data source:
A Puerto Rican handyman perched on a 10th floor ledge for an hour yesterday morning as many persons in a crowd of 500 on upper Broadway shouted at him in Spanish and English to jump. Even as cries of "Jump!" and "Brinca!" rang out, policemen pulled the man to safety from the narrow ledge at 3495 Broadway, the north-west corner of 143rd Street.
Mann identified five factors that contribute to the phenomenon: 1) the anonymity of being in a large crowd; 2) cover of darkness; 3) distance from the victim (but being close enough so that the person threatening suicide can still hear the cries urging him to jump); 4) duration of episode (people get bored and restless waiting too long); and 5) hot temperatures.

My theory is that people are okay until you gather them together into a crowd, at which point they transform into the lowest form of life imaginable.