While we're on the subject of what's good and/or bad for baby let me make this offering.

If you're not old enough to remember Blatz Beer (sold to Pabst in '59) then you, most likely, could walk before the age of six but, I'll bet you we had a happier childhood. 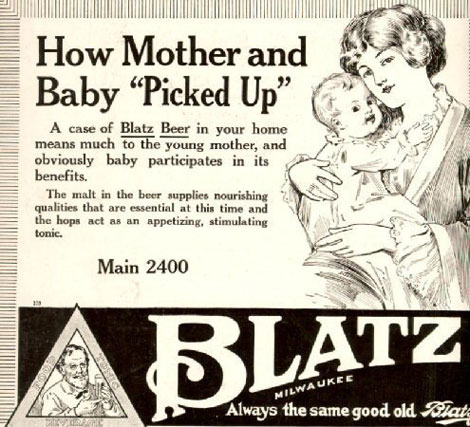 Here's a creepy old ad. Why doesn't the thermos come with a nipple then?


Can’t Do Anything Right?  You Are Not Alone

The case of the disappearing teaspoons

Kim Mordue of Llanelli, Wales lost her son, he died after taking the drug GHB. The grieving mother decided on a very different way of memorializing him. Lloyd, the son, was cremated then his mother had his ashes mixed with tattoo ink and had three tattoos put on her back. The artwork was done by her husband, Lloyd's father, Dave the owner of a tattoo parlor. Kim says, " I've put Lloyd back where he started -- he's in my body again". Somehow both disquieting and touching at the same time. 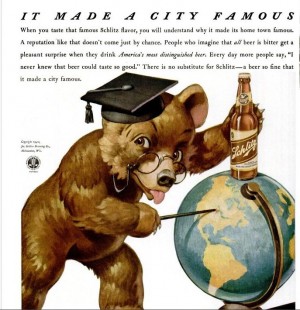 1) I have never seen another Schlitz ad with a bear.

2) Bears were not a Schlitz mascot.

3) The text of the ad makes no mention of the bear.

WHAT IS THIS BEAR DOING HERE?

Was there a famous trained bear circa 1942 that Schlitz wanted to associate themselves with? Do bears in the wild have a particular fondness for Schlitz? What university does this bear teach at?

So many questions from one little ad.....

Can't Possibly Be True: Not only do your taxes make possible free, expensive medical care for uninsured humps who wake up every morning with no plans except to do unhealthful things all day, and not only do your taxes pay for their free, expensive meds so they'll be a little less likely to wind up back in the hospital for more free, expensive care, but now your taxes may go to set up a rewards program so that forgetful or obstinate humps who don't take their free, expensive meds get a "financial incentive" to take them. Yes, it's come to this: In test projects now, we're paying these humps $10 to $100 a day just to remember to take their meds. And you know what? It's probably a good deal for us taxpayers. New York Times

Barry Scheck's Road to the Holy Grail, One More Time: A retired Texas judge, assigned to decide the fate of an inch-long strand of hair from the scene of a 1989 murder, ordered DNA testing on it, and if it comes back with someone's besides Claude Jones's, it will become official (though still on a technicality): Texas will have wrongly executed someone (in that Gov. George W. Bush dispensed with Mr. Jones a decade ago). (It's still a "technicality" because it will not establish Jones's actual innocence, but, without that strand of hair, Jones would have been legally ineligible for the death penalty even if he had done the murder.) Associated Press via Cleveland.com

♫ Don't Know Much About Science Books ♪ . . .: (1) Israeli researchers say they've shown that making batteries out of potatoes is quite cost-efficient for less-developed countries. (2) A Peruvian artist said he could re-engineer an historic glacier in that country just by painting the nearby mountains white. (Bonus: It sorta makes sense!) (3) Whale poop, released along the ocean's surface, causes absorption, by plankton, et al, of about twice as much carbon as whales release, themselves. Haaretz (Tel Aviv) /// BBC News /// Discovery.com