The State Dept.’s just rope-a-dopin’ us now. It couldn’t be true. The Special Inspector Gen’l in Afghanistan found a $300k contract for, um, 600 gallons of diesel. They’re just messin’ with us. ToloNews.com (Kabul)

Worried about Pacific garbage? Relax. Turns out 267 marine species eat plastic. But wait--a decent society should be concerned about the health of barnacle critters, too. And wait--they eat it, but they turn around and poop the plastic back into the ocean, anyway. Mother Nature Network

People Different From Us includes this guy, Chris Guest [ed., no, not THE Christ Guest], who’s living completely off the electric grid for 3 yrs now just because the utility charged him about $110 that he doesn’t feel like paying. That’ll teach the company! /// This family thinks its loved one will not rest easily unless his gravestone is, umm, SpongeBob SquarePants. /// You’d think a 10-passenger plane ferrying skydivers to an exhibition, and crashing, would have 10 survivors. /// You mean, there were no better ideas? To set a Guinness Book record, 21 people set themselves on fire (with protective suits, but still--) World’s Greatest Newspaper /// Time /// CNN /// USA Today

How embarrassing! A moose hunter in Norway missed, but the shot penetrated an outhouse wall and hit a reader. And in Port Richey, Fla., a suicide bullet finished Job One but then sought out a bystander, too. /// Brought a stun gun to a .38 gunfight. /// Walter Serpit (“[M]yself, being an alcoholic”) braved the house fire in Columbus, Ga., to rescue “several” cans of beer. /// Worse Sex Life Than You: Curtis Hutchings, Belleville, Ill. Sky.com (London) /// Tampa Bay Times /// WSAZ-TV (Huntington, W.Va.) /// WTVM-TV (Columbus, Ga.) /// Belleville News Democrat

Two black New York City shoppers told WCBS-TV they wanted Jay-Z to intervene with the retailer Barneys to stop the hassling by suspicious store clerks. (Buried Lede: A shopper who can afford a $2,500 handbag feels all oppressed.) WCBS-TV

Moo Moo the New Zealand kitty cat survived a crossbow shot directly to the skull but has apparently made a complete recovery. (Buried Lede: Veterinarians sound like they can actually tell whether Moo Moo had suffered “brain” damage.) Stuff.co.nz

“The Joker” was under arrest. The Smoking Gun

Here’s how you protest the gov’t, with the purple finger of fate. BBC News

Advice: Rev. Pat Robertson says, if your son’s deaf, you’re doing something wrong (but he’s not sure what). YouTube

Sometimes, life’s gotcha by the balls. The French bank Caisse d’Epargne’s cutting-edge ad campaign is on it. The Local (Paris)

Newsrangers: Harry Thompson and Gerald Davidson and the News of the Weird Board of Editorial Advisors. 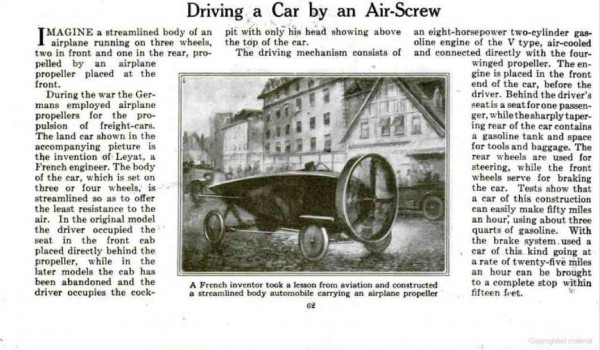 Imagine the streets of a city filled with these lethal machines!

They get your loved ones in the ground in a third of the time! 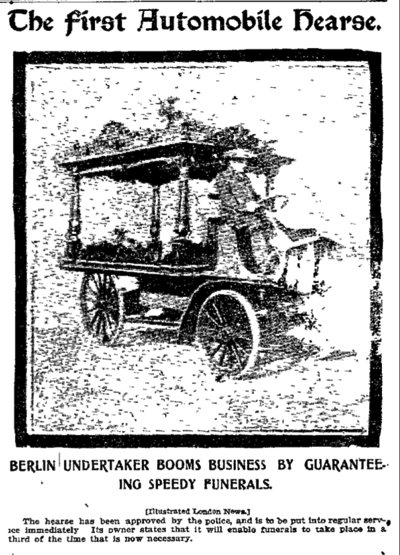 PREVIOUSLY ON WEIRD UNIVERSE: Imminent Swirling Vortex of Damnation: Land developers for the iconic Stanley Hotel in Estes Park, Colo. (famous as the inspiration for the hotel in Stephen King’s “The Shining”) announced recently that they need more space and thus will dig up and move the hotel’s 12-gravesite pet cemetery. Neighbors told the Fort Collins Coloradoan in September that they feared the construction noise but somehow ignored the potential release of departed spirits (though an “Animal Planet” “dog psychic” who lives in Estes Park seemed to volunteer her services to calm the pets’ souls). [Fort Collins Coloradoan via USA Today, 9-26-2013]

The War Against “Doing the Right Thing”

PREVIOUSLY: Walter Dixon knew that he was about to be relocated in December 2012 from a Joliet, Ill., correctional facility to begin serving a new federal drug conspiracy sentence, but instead, state officials mistakenly freed him. Dixon protested but said he was aggressively dismissed from the premises. It was not until September that he was finally re-arrested and began his new sentence. (Dixon was easily located because, though free, he had met regularly with his parole officer and was taking several vocational courses.) [Chicago Sun-Times, 10-4-2013]

After consulting with a lawyer, Evan Dobelle, president of Massachusetts’s Westfield State University, accused of billing the state for unauthorized travel expenses, is reportedly considering claiming that he actually “self-report[ed]” the violations as soon as suspicions turned up. Dobelle says he would thus be entitled to protection of the state “whistleblower” statute, which shields inside informers when they expose wrongdoing. (Dobelle was placed on paid leave in October.) [The Republican (Springfield, Mass.), 9-24-2013, 10-17-2013]

PREVIOUSLY: In September, landlord Elwyn Gene Miller, 64, went on trial in Iowa City, Iowa, for spying on tenants in the small apartment building he owns--after apparently having constructed peepholes allowing him views into bathrooms and other areas and having been spotted climbing from a crawl space after accessing one peephole. Nonetheless, as Miller’s lawyer pointed out, the law applies only to peeping for “sexual gratification,” and there is no “first-hand knowledge or observation” that Miller was “aroused” at the time he was spotted. (At press time, the judge was mulling a decision.) [Iowa City Press-Citizen, 9-25-2013]

PREVIOUSLY: William Woodward of Titusville, Fla., awaiting trial on two murder counts in September, might normally have a weak defense under the state’s “stand your ground” law (which requires an “imminent” threat of a forcible felony) because evidence indicates that any threats against him were made previously and not at the time of shooting. However, in a court filing, Woodward’s lawyers justified the pre-emptive ground-standing by referring to the “Bush Doctrine” employed by the U.S. in invading Iraq in 2003 (the U.S. “standing its ground” against Iraqi weapons of mass destruction). (The judge promised a ruling by November.) [Florida Today (Stuart, Fla.), 9-4-2013, 9-25-2013]

Perfect Sense: A 77-year-old motorist told police in Kagawa Prefecture, Japan, that he was going the wrong way on the Takamatsu Expressway only because he had missed his exit 1 km back and thought it best just to turn the car around and retrace the path back to the ramp. Police said his short September jaunt had caused two collisions, neither affecting the man’s own car. [Yomiuri Online via Japan Today, 9-26-2013]

Lame: (1) In October, Jeffrey Laub, 39, was sentenced on several traffic charges, including leading police on a 111-mph, “Dukes-of-Hazzard-style” chase through Logan Canyon near Logan, Utah, with the explanation only that he needed an emergency restroom because of something he ate. Judge Thomas Willmore called the excuse “one of the worst” he had heard, since Laub had passed several public toilets during the chase. PREVIOUSLY: (2) Riverview, Fla., schoolteacher Ethel Anderson, 31, was convicted in September of having sex with a 12-year-old boy she was tutoring, despite her attempt to explain away the key evidence--“hundreds” of sexual text messages--as mere “rewards” to get his attention and encourage progress in math. [Herald Journal (Logan, Utah), 10-9-2013] [Tampa Bay Times, 9-19-2013]

PREVIOUSLY: In September, an appeals tribunal reinstated Gwent, Wales, police officer Shaun Jenkins, 36, who was fired in 2010 for having sex with a woman while on duty. The head of a police court concluded that Jenkins was on an authorized break at the time--no more improper than stopping for “a spot of tea.” (Investigators originally found it appalling that Jenkins was out of uniform during the escapade, but he pointed out that his gun remained on his person at all times, albeit down around his ankles.) [BBC News, 9-16-2013]

PREVIOUSLY: The city council in Washington City, Utah, recently approved the construction of a firing range next to the Dixie GunWorx shop, even though the firing range’s neighbor on the other side is a women’s domestic-abuse shelter (whose officials fear that gunfire might re-traumatize some of the victims who had sought refuge). Dixie’s CEO told KSTU-TV that if the shelter victims had been armed in the first place, they could have prevented the abuse. [Salt Lake Tribune, 9-3-2013]

Among the many arrested recently for having solitary sex in public was Philip Milne, 74, ultimately convicted in the UK’s Bedford Magistrates’ Court of touching himself on a transit bus although he claimed he was merely “shampooing” his troubled genital area and resented “being treated like a hardened criminal.” Also, Stuart Clarke, 48, of Provo, Utah, had explaining to do after an incident on Delta Air Lines in 2012. He said that he was rubbing his exposed penis only because it burned from accidental contamination with peppermint oil (which so distressed him that, upon landing, he left behind a checked bag). The FBI Joint Terrorism Task Force found that out and is currently investigating whether there is more to the “peppermint oil” story than embarrassment-avoidance. [MK News (Milton Keynes, England), 9-30-2013] [The Smoking Gun, 8-15-2013]

(1) A Tucson, Ariz., man apparently escaped a traffic stop in August, but not unscathed. After fleeing to a dead-end street, he climbed out the passenger window, but his foot got caught, and his still-moving car’s back tire ran over his sprawled torso. The motorcycle officer was not able to catch the injured man, who staggered off into the neighborhood. PREVIOUSLY: (2) Lucas Burke, 21, and Ethan Keeler, 20, attempting to break into a safe at New Yard Landscaping in Hopkinton, N.H., in October, possibly seeking drug money, unwisely chose to use an acetylene torch. Included in the safe’s contents was a supply of consumer fireworks, and, according to the police report, the resultant explosion “blew their bodies apart.” [Arizona Daily Star, 8-8-2013] [Union Leader, 10-10-2013]

It’s the “holy grail” of beers, said a Boston pub manager, but, still, only 60,000 cases a year of Westvleteren are brewed because the Belgian Trappist monks with the centuries-old recipe refuse to expand their business (and even take to the phones to harass black-marketers). Westvleteren is sold only at the monastery gate, by appointment, with a two-case-a-month limit, at a price that’s reasonable for retail beer, but anyone who gets it from a re-seller will pay 10 times that much. Producing more, said Brother Joris, to a Wall Street Journal reporter in November [2007], “would interfere with our job of being a monk.” Furthermore, said Brother Joris, referencing the Bible, “f you can’t have it, possibly you do not really need it.” [Wall Street Journal, 11-29-2007]

Thanks This Week to T.C. Hollingsworth, David Swanson, David Schneider, Rich LeVinus, and Cindy Hildebrand, and to the News of the Weird Board of Editorial Advisors.

During the 1930s and 40s, there was good money to be made by raising giant frogs, as evidenced by the number of ads promoting this income opportunity.

The plan was to buy the booklet "A Future in Frogs." Start growing the giant frogs. Sell them to the American Frog Canning Co. Then count all your money!

The booklet "A Future in Frogs" seems to have entirely disappeared. I can't find any copies used or in libraries. The world has lost a literary classic. 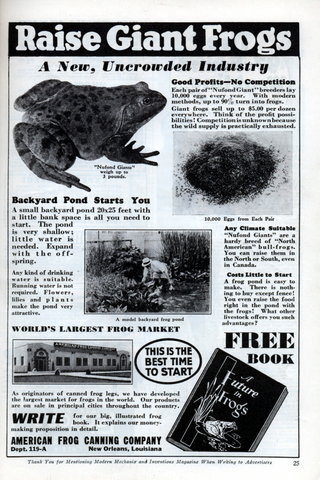 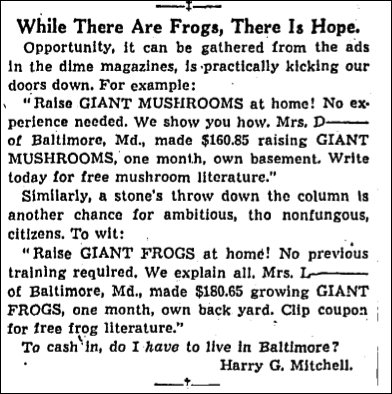 You know you've wondered what it would be like. Now you have the opportunity to stay in an Eastern German military bunker and sack out in incredibly uncomfortable looking beds.

Here's a photo of some of the food featured from the time at the bunker -- I don't think these are on the menu.

Here's the link to the photoblog:

Pass the borscht and dig in!!