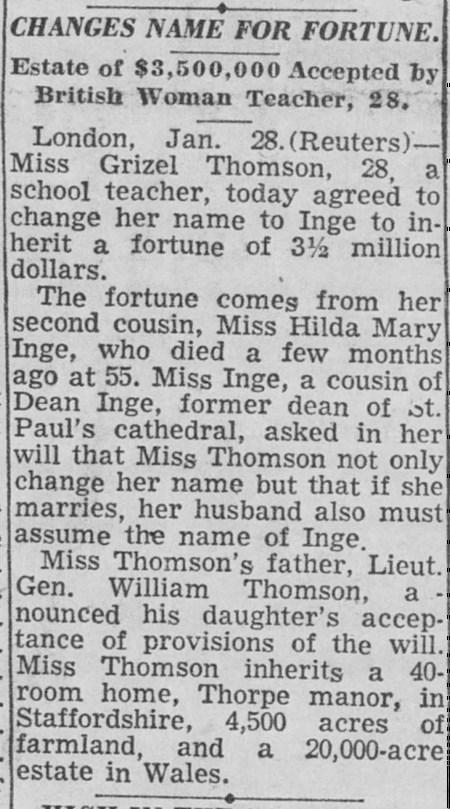 According to the flabbergasted sheriff of rural Chesterfield County, S.C., “This has completely changed our definition of [what constitutes] an ‘ass-load’ of guns.” Brent Nicholson, 51, had been storing more than 7,000 firearms (most of them likely stolen) in his home and a storage building on his property. Every room of the house of was stacked with weapons; it took four tractor-trailer trips to haul everything away, with help of 100 law-enforcement officers. Nicholson also had 500 chainsaws, at least 250 taxidermied deer, elk, and alligator heads, and more. No motive was obvious to deputies. (Nicholson would still be living in the shadows today if he hadn’t run that stop sign on October 21st with bogus license plates on his truck.) [WSOC-TV (Charlotte, N.C.), 11-11-2015] [Headlines & Global News (New York), 12-5-2015]

The Human Fanny Pack: Brandon Wilson, 26, was arrested in November in Cedar Rapids, Iowa--his second bust of 2015 in which a substantial number of crack cocaine “baggies” were found in his rectum. Fifty-one were recovered this time (counting the ones with marijuana), down from the 109 discovered in his February arrest. Police in November also found $1,700 cash on him (but just in his pocket). [KCRG-TV (Cedar Rapids), 12-1-2015]

Following the release of Apple’s yearly financials in October (and based on sales of its iPhone 6), the company announced that, apart from other assets, it was sitting on $206 billion in cash--about like owning the entire gross domestic product of Venezuela, but all in cash. Another way of expressing it: Using only its cash, it could buy every single NFL, NBA, MLB, and NHL team, plus the 20 most valuable international soccer teams--and still have plenty left. Or, as the BGR.com blog also pointed out, it could instead simply give every man, woman, and child in America $646 (coincidentally, about what a new iPhone 6 sells for). [BGR.com, 11-3-2015]

Even if Armageddon doesn’t happen, the CEO of the massive online retailer Overstock.com believes there is a “10 to 20 percent” chance of a world financial meltdown in the next few years, and he is arranging to be back in business in the aftermath. Patrick Byrnes told the New York Post in November he has stashed away enough food in a well-fortified facility in Utah’s Granite Mountain to serve his 2,000 employees for “30 to 60 days,” along with several thousand other emergency preparations and $10 million in gold. But, he insisted, he’s not a gun-toting “prepper”; the plan is only about tiding employees over until the Internet and banking systems are back up and running. [New York Post, 11-15-2015]

In November in Harare, Zimbabwe, Mison Sere, 42, was adjudged winner of the 4th annual “Mister Ugly” contest after showcasing his seemingly random dental arrangement (some teeth there, some not) and “wide range of grotesque facial expressions,” according to an Associated Press dispatch. However, many in the crowd thought their favorite was even uglier and threatened to riot. “I am naturally ugly,” said a jealous (former winner) William Masvinu; “He [Sere] is ugly only when he opens his mouth.” [BBC News, 11-23-2015]

Cool Moms? (1) Jennifer Terry, 44, was charged with driving her daughter and several other minors around Riverdale, Utah, in August to facilitate their tossing eggs at 10 to 20 homes. Some damage was reported, but so far, Terry is the only one charged. (2) Mandy Wells, 32, told police that she thought “for a minute” that it was a bad idea “but did it anyway”--invited ten kids (aged 12 to 14) to her home for a party and served beer and marijuana. Wells, of Springtown, Tex., said her daughter, 14, smokes marijuana because the girl (Go figure!) suffers from depression. [Ogden Standard examiner, 12-1-2015] [The Smoking Gun, 11-25-2015]

Kuala Lumpur International Airport took out ads in two Malaysian daily newspapers in December to find the owners of three Boeing 747-200F’s parked there for months (one for at least a year) and threatening to auction them off in 14 days if not claimed. Two are white, and one is “off-white” (if the reader is checking his inventory). The planes’ last listed owner said it sold them in 2008. [CNN, 12-8-2015]

Russian artist Pyotr Pavlensky, 31, has devoted his career to getting on the government’s nerves and succeeded once again in November. (News of the Weird last mentioned him in 2013 when he nailed his scrotum to the floor in Moscow’s Red Square to protest police oppression.) In his latest event, he set fire to the front door of the headquarters of Russia’s security service (the FSB, formerly KGB) and has been detained--though from his cell, he demanded his charge of “vandalism” be changed to “terrorism.” A member of the Russian band Pussy Riot called the door fire “the most important work of contemporary art of recent years.” Pavlensky once sewed his lips together protesting arrests of Pussy Riot. [Global Post (Boston), 12-3-2015]

Following prosperous news reported here (from New York, the Czech Republic, and Massachusetts), the Church of the Flying Spaghetti Monster of New Zealand announced on December 10th that the country’s official records now recognize the Church as a legal sanctioner of marriages. The Church must now nominate an “official marriage celebrant” (who will be known as “His Noodly Honour”). [Stuff.co.nz (Wellington), 12-15-2015]

Matthew Riggins had told his girlfriend earlier that he and a pal were planning to burglarize some homes around Barefoot Bay in Brevard County, Fla., and were apparently on that mission on November 23rd when an alert resident called 911, and the men scrambled. The accomplice was caught several days later, but Riggins himself did not survive the night--having taken refuge in nearby woods and drowned trying to outswim an apparently-hungry 11-foot alligator. [WFTV (Orlando), 12-8-2015]

According to police, Ryan Liskow, 36, badly violating the crime-novel “rule” about not returning to the scene of the crime, is now awaiting trial for robbing the Sterling State Bank in Rochester, Minn., on December 14th--and 15th. An on-scene reporter for KIMT-TV was on the air on the 15th describing the first robbery, unaware that Liskow was inside robbing it again, and as Liskow emerged on foot with a bank employee in pursuit, reporter Adam Sallet helped point out Liskow, who was soon arrested. [KIMT-TV (Mason City, Iowa), 12-15-2015, 12-16-2015]

Arrested for burglary, in Porthcawl, Wales, November: Christopher Badman. Charged in two shootings in Medina County, Tex., November: Shane Outlaw. Arrested for allegedly having sex with a child, in Springfield, Mass., December: Mr. Long Dinh Duong. Arrested for trespassing at a Budweiser brewery in St. Louis, Mo., December: Mr. Bud Weisser, 19. Credited with rescuing two women from a man who was terrifying strangers on the street in Toronto on November 22nd: the local professional clown Doo Doo (Shane Faberman). (Bonus: Doo Doo was in costume when he made the rescue.) (Also in the news was a “Vietnamese” man supposedly named Phuc Dat Bich, having trouble getting Facebook to register his name. Despite having several mainstream-media outlets gullibly cover his complaint in mid-November, he admitted a week later that the name is bogus.)
Badman: [BBC News, 11-10-2015]
Outlaw: [MySanAntonio.com, 11-22-2015]
Duong: [The Republican (Springfield), 12-5-2015]
Weisser: [KTVI-TV (St. Louis), 12-4-2015]
Doo-Doo: [Washington Post, 11-24-2015]
Bich: [CNN, 11-25-2015]

Parents of the 450 pupils (aged 3-11) at Applecroft primary school in Welwyn Garden City, England, were given individualized yearbooks recently [2010] with all the children's faces obscured by black bars over the eyes (except for photos of the recipient's own children, which had no obstructions). The precautions (described by one parent as “creepy,” like kids were "prisoner[s]”) were ordered by headmistress Vicky Parsley, who feared that clear photos of children would inevitably wind up in child pornography. The year before, Parsley had prohibited parents from taking photographs during school plays--of their kids or any others--for the same fear. [Daily Mail, 11-27-2010]

Is this deliberately suggestive? Or do I just have a dirty mind? 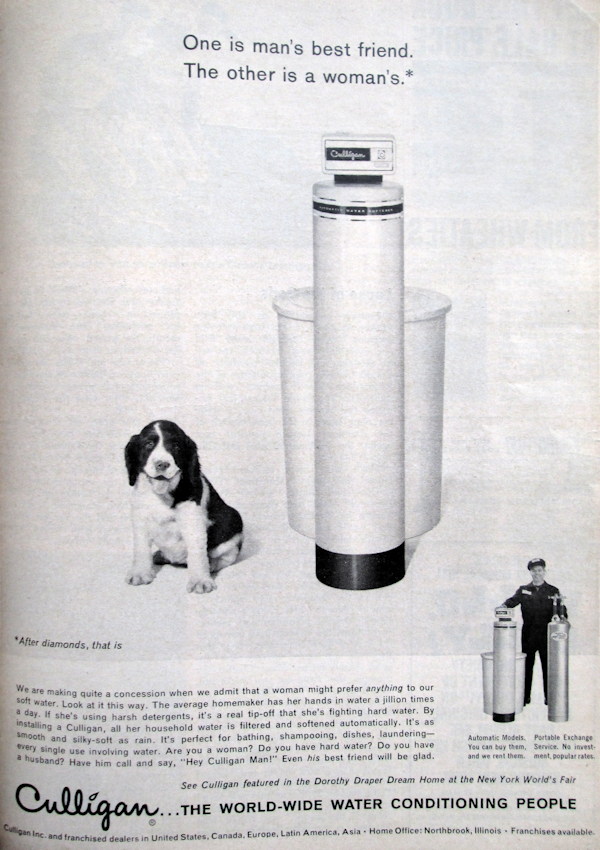 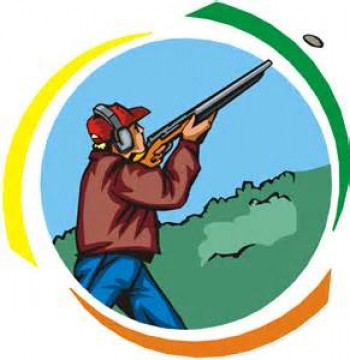 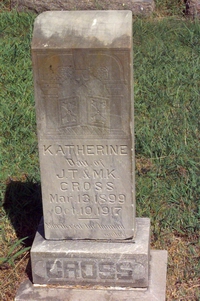 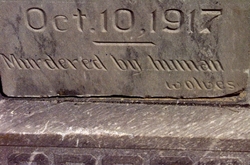 This has generated all sorts of local legends, and it's also inspired a novella by Steven Wedel, Murdered by Human Wolves (The Werewolf Saga). 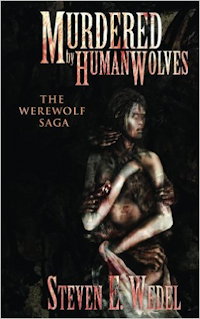 The most likely explanation is that she died as a result of a botched abortion operation, and that the mysterious phrase was meant to be metaphorical. But still, cool epitaph! 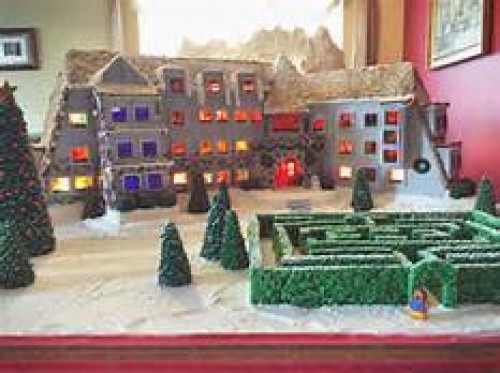 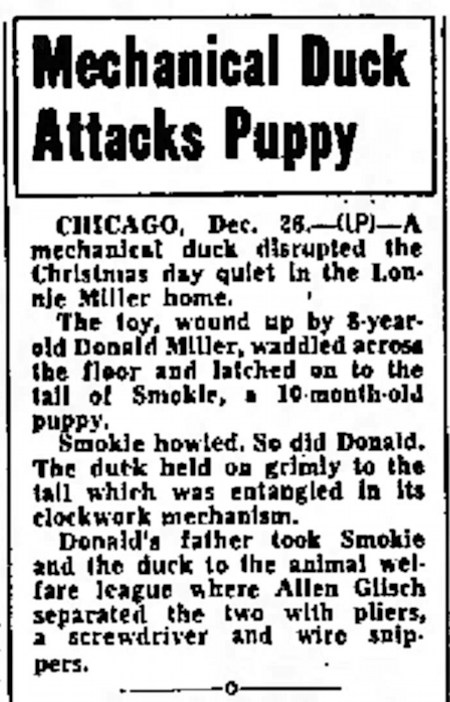 Mechanical Duck Attacks Puppy
CHICAGO, Dec. 26 — A mechanical duck disrupted the Christmas day quiet in the Lonnie Miller home.
The toy, wound up by 8-year-old Donald Miller, waddled across the floor and latched on to the tail of Smokie, a 10-month-old puppy.
Smokie howled. So did Donald. The duck held on grimly to the tail which was entangled in its clockwork mechanism.
Donald's father took Smokie and the duck to the animal welfare league where Allen Glisch separated the two with pliers, a screwdriver and wire snippers. 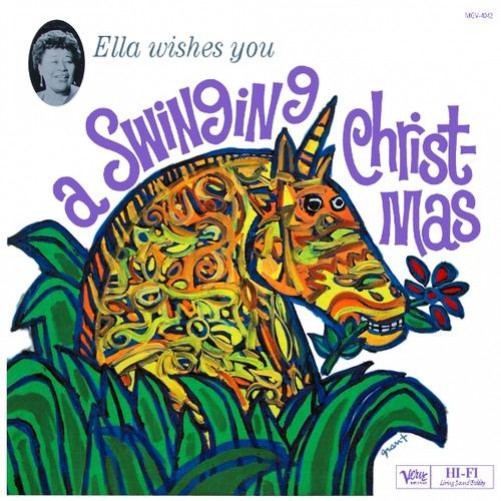