This was not a model of car that had nine lives.

Why the site was so slow yesterday

If you tried to visit WU yesterday, you probably couldn't get it to load. The reason for that is because one of our old entries, about "paradoxical undressing," was linked to by reddit's "Today I Learned" subreddit, and that resulted in the server being overwhelmed by traffic. The phenomenon is known as the "reddit hug of death."

I tried to do what I could to mitigate the server freeze by redirecting the reddit traffic to a static page, but it only helped a little bit. However, the gaze of reddit now seems to have moved on to other things, so server response times have returned to normal.

In 1972, the City Council of Ames, Iowa reprecincted the city in order to comply with new legislative district lines drawn by the Iowa Supreme Court. In doing so, they inadvertently created one precinct that had no residents in it — except for pigs, because the precinct was entirely occupied by the 15-acre Experimental Animal Disease Laboratory.

Ames has redistricted since 1972, so I'm assuming the pig precinct no longer exists. 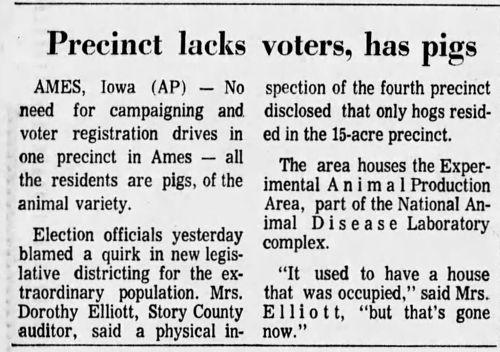 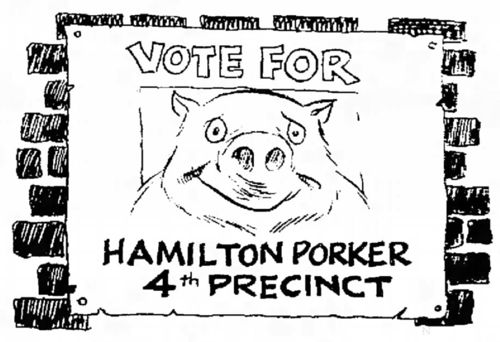 Animal Farm, by the CIA 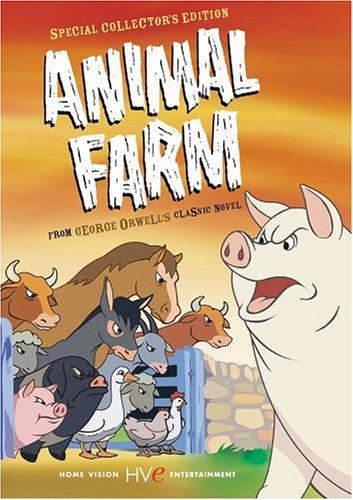 I've previously posted an example of a comic book created by a government for the purpose of propaganda or education ("Confidencias de un Senderista"). In a similar vein is the 1955 film Animal Farm, which was the first animated feature film released in the UK. It was produced by the CIA. As reported in the NY Times (Mar 18, 2000):


Many people remember reading George Orwell's "Animal Farm" in high school or college, with its chilling finale in which the farm animals looked back and forth at the tyrannical pigs and the exploitative human farmers but found it "impossible to say which was which."
That ending was altered in the 1955 animated version, which removed the humans, leaving only the nasty pigs. Another example of Hollywood butchering great literature? Yes, but in this case the film's secret producer was the Central Intelligence Agency.
The C.I.A., it seems, was worried that the public might be too influenced by Orwell's pox-on-both-their-houses critique of the capitalist humans and Communist pigs. So after his death in 1950, agents were dispatched (by none other than E. Howard Hunt, later of Watergate fame) to buy the film rights to "Animal Farm" from his widow to make its message more overtly anti-Communist.
You can watch the entire film streaming for free (with ads) over at Hulu. 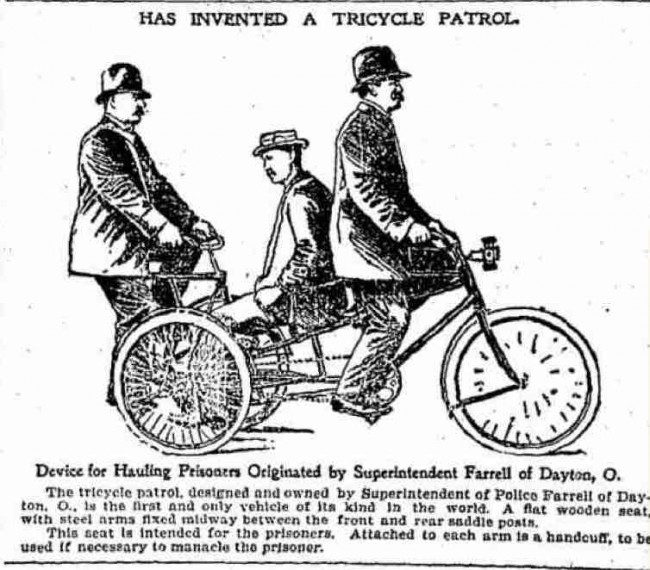 More and more churches ("hundreds," according to a June Christianity Today report) offer hesitant parishioners a "money-back guarantee" if they tithe 10 percent (or more) of their income for 90 days--but then feel that God blesses them insufficiently in return. The South Carolina megachurch NewSpring instituted such a program in the 1990s and claims that, of 7,000 recent pledgers, "fewer than 20" expressed dissatisfaction with the Lord. Advocates cite the Bible's Book of Malachi, quoting God himself (according to Christianity Today): "Test me in this." "Bring the whole tithe into the storehouse" and "see if I will not pour out so much blessing" that "there will not be room enough to store it." [Christianity Today, 6-28-2016]

A leading Chinese orthopedic surgeon continues to believe that "full-body" transplants are the next big thing in medicine, despite worldwide skepticism about both the science and the ethics. The plan for Dr. Ren Xiaoping of Harbin Medical University calls for removing both heads (the deceased donor's and the live recipient's), connecting the blood vessels, stabilizing the new neck, and "bath[ing]" spinal-cord nerve endings chemically so they will connect. (Critics say it is impossible to "connect" spinal-cord nerves.) According to a June New York Times dispatch, doctors regularly denounce China's ethical laxities (though Chinese officials term such denunciations "envy" at China's achievements). [New York Times, 6-11-2016]

(1) In June, District Attorney Jerry Jones in Monroe, La., dropped drug and gun charges against college football players Cam Robinson and Hootie Jones (who play for University of Alabama but are from Monroe)--declaring that the "main reason" for his decision is that "I refuse to ruin the lives of two young men who have spent their adolescence and teenage years working and sweating, while we were all in the air conditioning." (2) A Philadelphia "casting" agency solicited "extras" to show up at polling stations on the April 26th Pennsylvania primary day for candidate Kevin Boyle, who was running against state Sen. John Sabatina--offering $120 each (plus lunch and an open bar). Since most polling-site "electioneering" is illegal, the probable job was merely to give voters the impression that Boyle was very popular. (Sabatina narrowly won.) [Times-Picayune (New Orleans), 6-22-2016] [Gawker.com, 4-27-2016]

In January, a Chicago Tribune investigation revealed that it was only 124 of the roughly 12,000 Chicago cops that caused misconduct complaints that resulted in settlements (since 2009)--with one officer, for example, identified in seven. (A June Chicago Reporter study claimed the city paid out $263 million in total on misconduct litigation during 2012-2015.) [Chicago Tribune, 1-29-2016] [Chicago Reporter, 6-22-2016]

(1) Insurance agent John Wright filed a lawsuit in Will County, Ill., in June over teenagers playing "Ding Dong Ditch," in which kids ring a doorbell but run away before the resident answers. The lawsuit claims that bellringer Brennan Papp, 14, caused Wright "severe emotional distress, anxiety, and weight loss," resulting in at least $30,000 of lost income. (2) The ex-boyfriend of Nina Zgurskaya filed a lawsuit in Siberia after she broke up with him for his reluctance to "pop the question" after a two-year courtship. The man, not named in a dispatch from Moscow, demanded compensation for his dating expenses. The trial court ruled against him, but he is appealing. [Patch.com (Joliet, Ill.), 6-24-2016] [Daily Telegraph (London), 6-3-2016]

A team of researchers is following about 30 tabbies, calicos, and others, recording their moves and sounds, to somehow learn whether housecats have dialects in their meows and alter other patterns of stress and intonation when they "speak" to other cats or to humans. In explaining the project, linguist Robert Eklund (of Sweden's Linkoping University) personally sounded out "a pretty wide range of meows to illustrate his points," wrote a New York magazine interviewer in April. Eklund is already an expert on feline purring (at Purring.org)--although from a distance, as he admits being allergic to cats. [New York, 4-27-2016]

Quixotic Malaysian designer Moto Guo made a splash at Milan's fashion week in June when he sent model after model to the runway with facial blotches suggesting they had zits or skin conditions. One reporter was apparently convinced, concluding, "Each man and woman on the runway looked miserable." [Daily Mail (London), 6-20-2016]

Out of Control: (1) Nelson Hidalgo, 47, was arrested in New York City in June and charged with criminal negligence and other crimes for parking his van near Citi Field during a Mets game and drawing players' complaints when he ramped up the van's 80-speaker sound system. "I know it's illegal, but it's the weekend," said Hidalgo. "I usually [just] get a ticket." (2) Trina Hibberd of Mission Beach, Australia, finally showed concern about the python living inside her walls that she has known about for 15 years but (perhaps "Australian-ly") had chosen to ignore. In June, it wandered out--a 15-foot-long, 90-pound Scrub Python she calls "Monty." "All hell broke loose," a neighbor said later, as snake-handlers took Monty to a more appropriate habitat. [AM New York, 6-20-2016] [Australian Broadcasting Corp. News, 6-21-2016]

Brigham Young University professor Jason Hansen apologized in May after coaxing a student (for extra credit) to drink a small vial of his urine in class. The physiology session was on kidney function, and Hansen thought the stunt would call attention to urine's unique properties. He confessed later that the "urine" was just food coloring with vinegar added; that he had used the stunt in previous classes; and that he usually admits the ruse at the next class session. Nonetheless, Hansen's department chair suggested he retire the concept. [KSTU-TV (Provo), 5-31-2016]

A Woman at the Top of Her Game: In Nashville, Tenn., in June, sex worker Jonisia Morris, 25, was charged with robbing her client by (according to the police report) removing the man's wallet from his trousers while he received oral sex seated in his car, extracting his debit card, and returning the wallet to his pocket--without his noticing. [WZTV (Nashville), 6-16-2016]

Recidivist Jesse Johnson, 20, was charged again in June (suspicion of disturbing the peace) after he had crawled underneath a woman's car at an Aldi store's parking lot in Lincoln, Neb., waited for her to return, and then, as she was stepping into the car, reaching out to fondle her ankle. It was Johnson's third such charge this year, and he initially tried to deny the actual touch, instead claiming that he was underneath the car "simply for the visual." Johnson acknowledged to the judge that he needs help and that he had been in counseling but had run out of money. (At press time, the status of the latest incident was still pending.) [Journal Star (Lincoln), 6-23-2016]

(1) Australian lawyer William Ray was killed on May 22nd when he was thrown from his all-terrain "quad bike" in rural Victoria state and pinned underneath. Ray had come to prominence by representing Honda as the company balked at mandatory installation of anti-roll bars on quad bikes. (2) A 48-year-old employee at North Central Bronx Hospital in New York City died of a heart attack at work on June 7th, under circumstances (according to police) indicating that he was viewing a pornographic video at the moment of his death. [The Age (Melbourne), 5-23-2016] [New York Daily News, 6-8-2016]

When the assistant manager arrived early on June 26th [2012] to open up the Rent-A-Center in Brockton, Mass., he encountered a man on the ground with his head stuck underneath the heavy metal loading-bay door (obviously as the result of a failed burglary attempt during the night). "Hang tight!" the manager consoled the trapped man. "The police are on their way." Manuel Fernandes, 53, was arrested. [The Enterprise (Brockton), 6-26-2012]

Thanks This Time to Perry Levin and Jim Weiss, and to the News of the Weird Board of Editorial Advisors.

I occasionally get salesmen knocking at the front door. Usually they work for roofing contractors or home-security companies, though once I had a guy try to sell me nutritional supplements. But brush salesmen seem to have gone the way of the dodo. 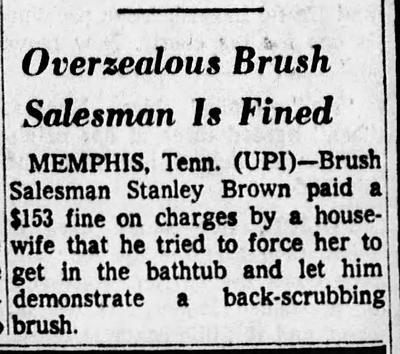 Overzealous Brush Salesman Is Fined
MEMPHIS, Tenn. (UPI) — Brush Salesman Stanley Brown paid a $153 fine on charges by a housewife that he tried to force her to get in the bathtub and let him demonstrate a back-scrubbing brush.