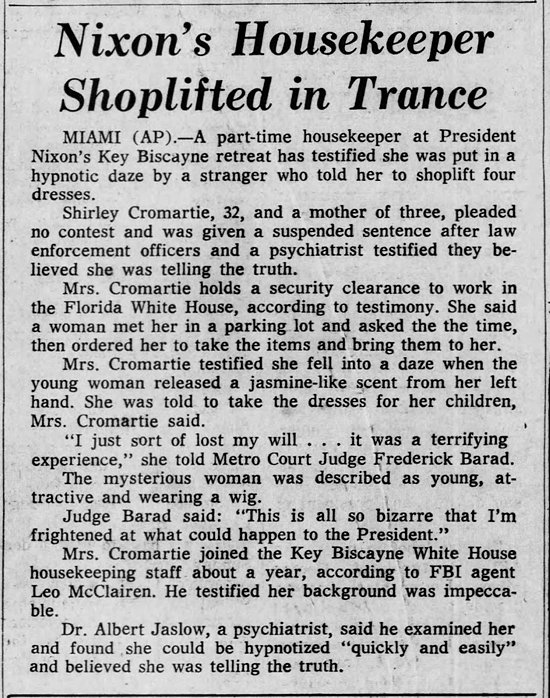 More info at the YouTube URL of this clip, as well as here. 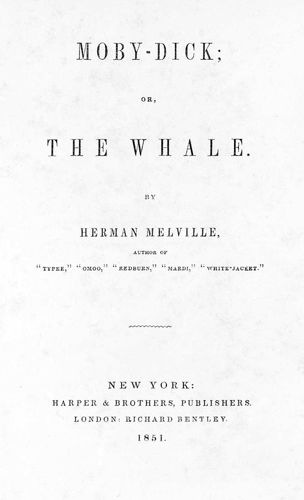 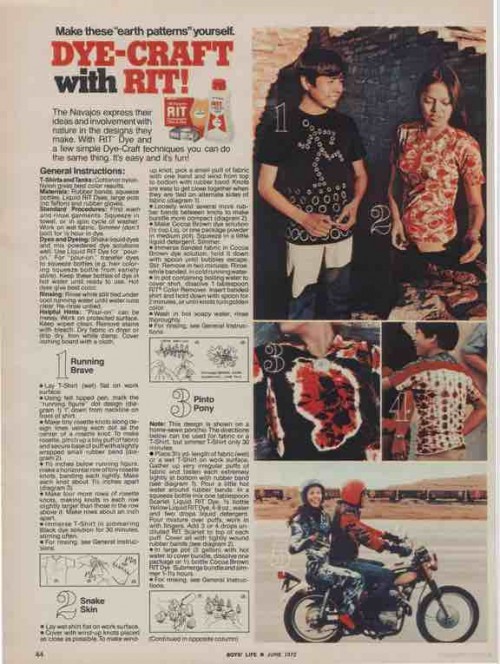 John Weigel and Olaf Danielson are engaged in a frenzied battle of "extreme birdwatching," hoping to close out 2016 as the new North American champ of the American Birding Association, and a September Smithsonian piece had Weigel ahead, 763-759. Danielson is perhaps better known for doing much of his birding in the nude (and is the author of the provocatively-titled volume, Boobies, Peckers, and Tits--all common names of popular birds). The old one-year record was 749, and the Association attributes the larger numbers this year to El Nino, which has disrupted food supplies and driven birds into different locations. [Smithsonian.com, 9-21-2016]

Compelling Explanation: House bill 54-15-1, passed in the Idaho legislature earlier in 2016, authorizes schools to read Bible verses verbatim daily in classrooms (despite the U.S. Supreme Court's having specifically condemned that practice ever since 1964). The bill's sponsor, Rep. Sage Dixon, said he thought his law was nonetheless constitutional because, "The little Supreme Court in my head says this is okay." (Even so, Gov. C. L. Otter vetoed the bill.) [LoweringTheBar.net, 3-30-2016]

Nebraska voters in November will be asked whether to keep the state's longstanding death penalty for murder--even though retaining it will require them to vote "Repeal." The legislature replaced death row last year with mandatory life sentences (to take effect only if the referendum passes), and the referendum is to "Repeal" or "Retain" that legislation. Hence, to abolish the death penalty, voters must select "Retain." The state attorney general, and election officials, declined to challenge the confusing arrangement, instead suggesting that Nebraskans are smart enough to figure the whole thing out. [Omaha World-Herald, 9-20-2016]

The Arizona legislature passed a child-molestation law recently that made any adult contact with children's genitals a criminal act, but unlike in other states' similar laws, neglected to include a requirement that the outlawed contact be for "sexual" purposes. Consequently, in principle, parents may be criminally liable, for example, for bathing a baby or changing its diaper. The Arizona Supreme Court ruled in September that it is up to the legislature to change the law, but some lawmakers professed indifference, confident that district attorneys will use good judgment about whom to prosecute. [Slate, 9-16-2016]

The 1,496-page German novel "Bottom's Dream," translated into (broken) English, more than twice as long as "War and Peace," recently reached U.S. bookstores as a 13-lb. behemoth, bound with a 14-inch spine that, based on a September Wall Street Journal description, will almost surely go unread. The story follows two translators and their teenage daughter over a single day as they try to interpret the works of Edgar Allen Poe, making for slow going for anyone not already conversant with Poe. (Bonus direct passage from page one: "above & belo, from out his hiking britches; He, tall=thin & hairy)./;") [Wall Street Journal, 9-24-2016]

While other vehicle safety-control engineers work on actually slowing down cars and buses when a risk is detected on the road ahead, one of Volvo's recent innovations appears aimed merely at just bullying pedestrians to get out of the way. According to a September report on Treehugger.com, the safety "control" for a Volvo bus consists of a progressively-louder horn-honking to scare off the pedestrian. [Treehugger.com, 9-23-2016]

Simple As That: (1) British farmer Pip Simpson, who lost nearly 300 sheep to rustlers in recent years, recently sprayed his remaining herd of almost 800 sheep a bright luminous orange (harmless, he said, though the sheep's opinions are unknown) to make them less attractive to thieves. (2) Saudi Arabia switched to the 365-day Gregorian calendar on October 2nd, in part to reduce government expenses. Bureaucrats had been using the Islamic lunar Hijri (354-day) calendar but now must work a 3-percent longer year for the same salaries. [Westmorland Gazette, 9-27-2016] [Gulf News via RT.com (Moscow), 10-3-2016]

In 2014, British entrepreneur Azid Chaiwala, 33, created the matchmaking service Second Wife--because, just as men have trouble finding that special person, some Mormons, Muslims, and others have at least as much trouble finding that special additional person. (Most clients, he said, are in the U.S. and the U.K., though bigamy is illegal in both places.) The service was so successful that Chaiwala this year inaugurated Polygamy dot com, which he adamantly defended as a moral alternative to adultery and one-night-stand services such as Tinder. [New York Times, 9-21-2016]

(1) The long-rap-sheeted Darren Clinton, 48, was in the process, according to Minneapolis police, of burglarizing a hotel room in September when an occupant returned and surprised him. Clinton, wielding a knife, escaped momentarily, but the occupant summoned his nearby roommates--the visiting University of Arizona men's cross-country team--and after a chase, which included jumping several barriers, the runners steered a severely-winded Clinton into the arms of a state trooper. (2) Kerry Johnson, 52, was arrested in August in Charleston, W.Va., and charged with robbing a City National Bank branch. Police said Johnson had been gambling at the Mardi Gras Casino in nearby Nitro when he ran out of money at the blackjack table. (He left a $25 chip to preserve his spot, excused himself, went to the bank, and came back with more money.) [Star Tribune, 10-1-2016] [Gazette Mail (Charleston), 8-3-2016]

Austrian Edition: (1) A massive, mile-long traffic jam on the Austrian A2 highway in October between Inzersdorf and Vosendorf was caused by the a huge flock of starlings crashing into cars and falling to the road. Ornithologists told reporters that the birds must have earlier feasted en masse on fermented berries and were navigating under the influence. (2) In September, an unnamed woman was detained at the airport in Graz, Austria, because her suitcase held two plastic containers with her late husband's intestines. She had come from Morocco seeking doctors' opinions whether he had been poisoned (but doctors told local media that they would have to examine the entire body to determine that). Police said no laws had been broken. [The Local (Vienna), 10-6-2016] [BBC News, 9-26-2016]

Gary Medrow, 68, has periodically surfaced in News of the Weird since 1991 for his unique behavior of using a false identity to persuade Milwaukee-area strangers over the phone to lift other strangers off the ground--behavior for which he has occasionally been jailed and ordered to psychiatric care. After a recent period of calm, Medrow slipped in November [2012] and was charged with impersonating a photojournalist to convince two Cedarburg (Wis.) High School students to hoist each other on their shoulders. At an earlier hearing, Medrow said that his “addiction” helps him to relieve tension and anxiety. [Milwaukee Journal Sentinel, 11-16-2012]

Thanks This Week to Peter Swank, Deborah Rogers, Mel Birge, and Pete and Sara Discenza, and to the News of the Weird Board of Editorial Advisors. 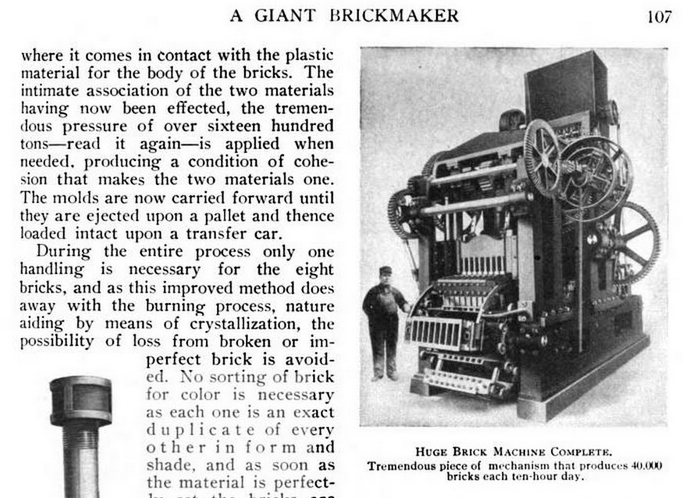 Most continuous time on commercial flights

In 1978, Thomas Crowder set a record for "time spent aboard commercial planes" by traveling back and forth between 91 U.S. cities for 21 days. He never spent more than three hours on layovers between flights.

As far as I can tell, Guinness never recognized this record. Nor can I find evidence that anyone has ever tried to top it.

I know that Guinness tries not to track records that encourage unhealthy or life-endangering acts. So maybe Crowder's record fell foul of this policy. Because spending 21 days sitting on commercial flights seems like a great way to develop deep vein thrombosis. 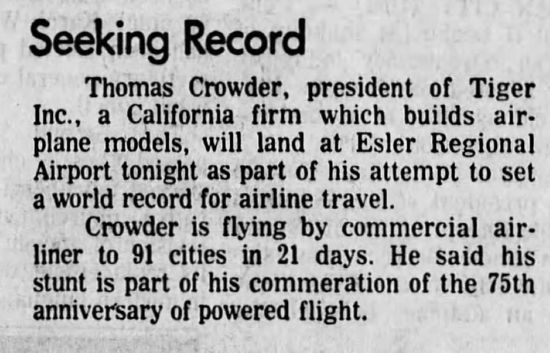 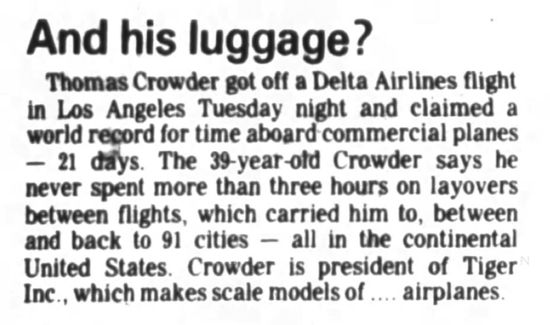 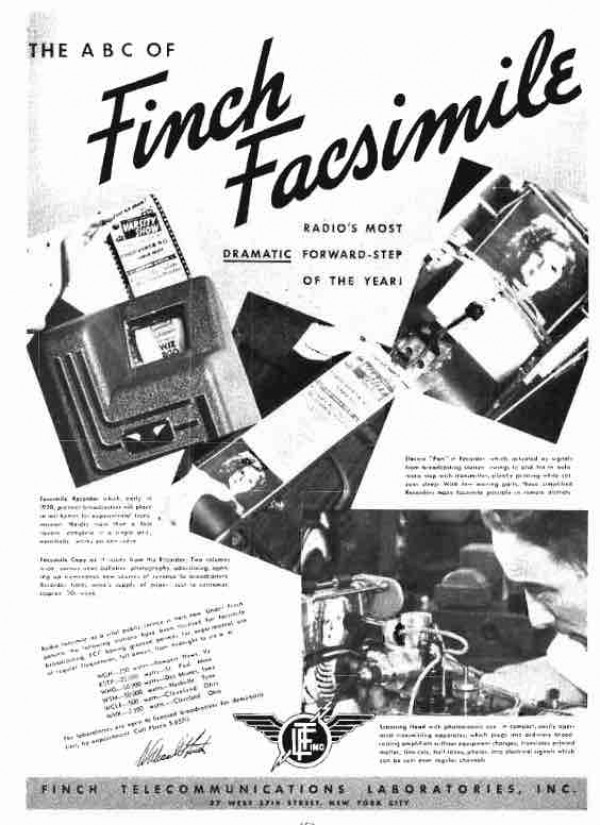 In the 1970s, it was widely believed that any product could be improved by adding denim to it. One example of this, already featured on WU, was the AMC Gremlin "Levi" Edition — an economy car upholstered with Levi jeans. It debuted in the early 70s.

Another example is the Zenith "Sidekick" Blue Jean TV, which hit the market in 1974. From the ad copy:


Meet Zenith's 12" diagonal black-and-white portable that's decked out, top and sides, in blue denim. Accented with bright orange stitching, authentic copper rivets, and a leather-look "Sidekick" name patch like the one on your jeans.

If you'd like to own one of these beauties, there's one for sale on eBay. Current bid is only $49.99. 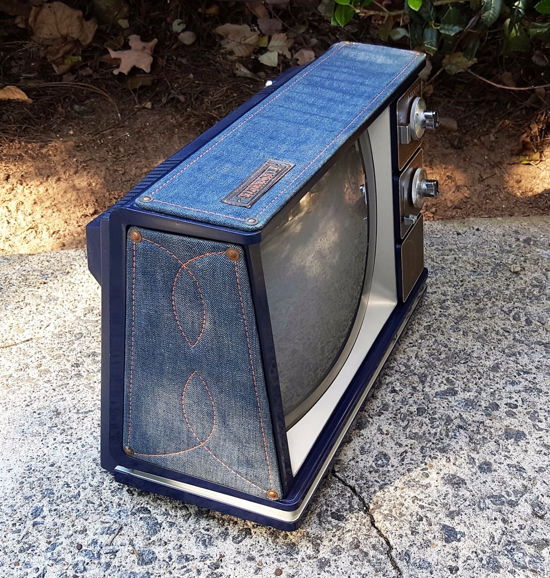 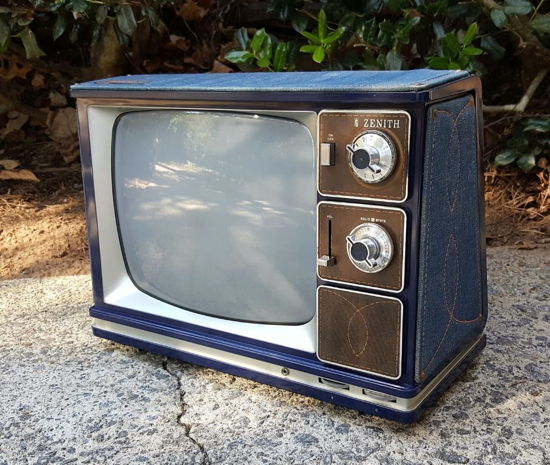 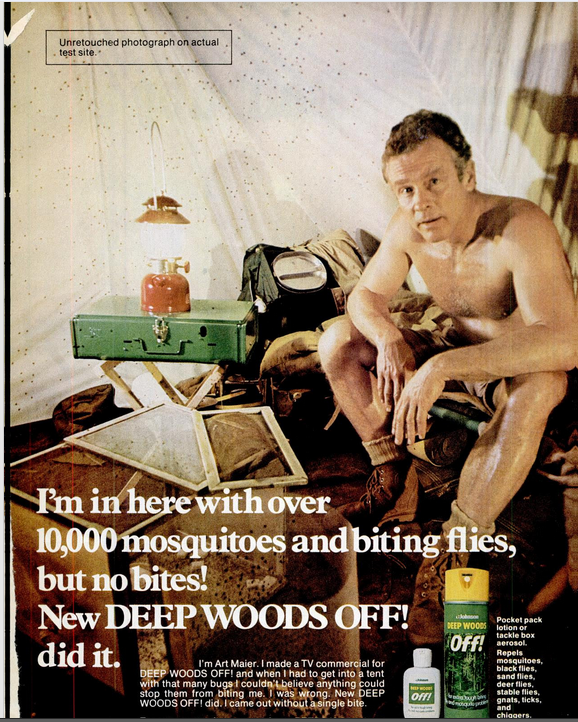