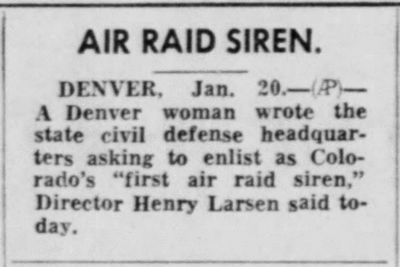 Perhaps they should have used her. When non-human sirens were installed the following year they reportedly didn't elicit much reaction. From Colorado: A History of the Centennial State:


Mort Stern, a writer for The Denver Post, reported in April 1952, "Denver's first air raid siren since World War II howled like a love-hungry wolf at a full moon at 11 a.m. Monday, but blasé citizens in the downtown area showed not the slightest reaction." 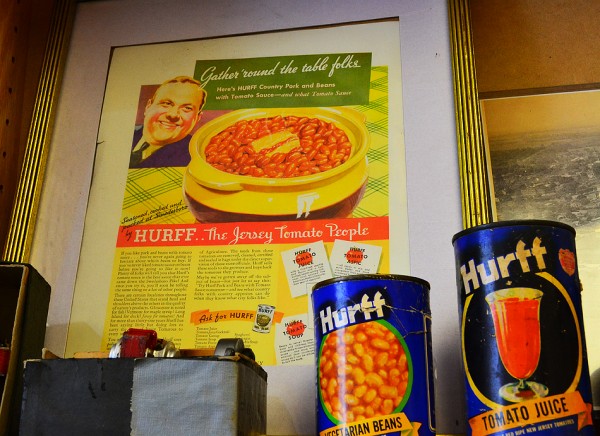 Once upon a time, a company with the somewhat off-putting name of Hurff was big enough to advertise in a top-of-the-line national magazine like LIFE. 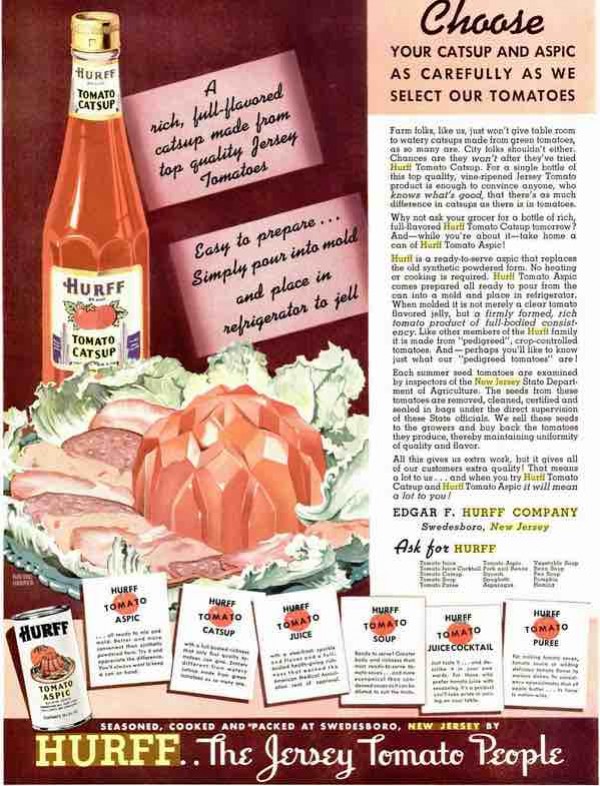 Here's the backstory, so far as I can find out. 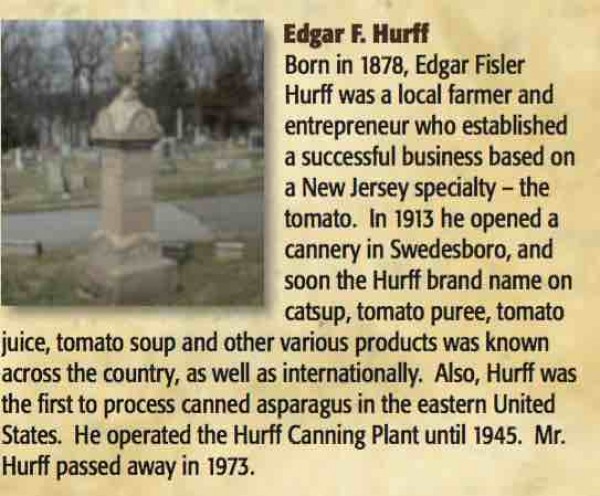 I have found ads from them as late as 1948. Does that mean that store was selling three-year-old cans of food, given the plant-closing date of 1945? Or maybe the plant did not close, but Hurff himself was forced out? We will probably never know...

Here's a guy who was caught on caught on camera stealing pigeons while wearing a bucket on his head and a plastic trash bag around his body. Florida, of course. 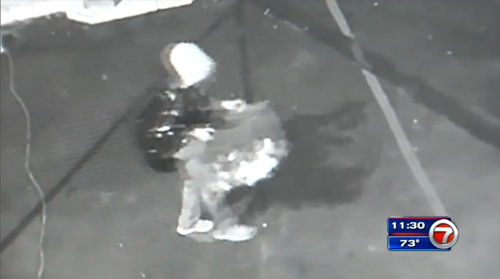 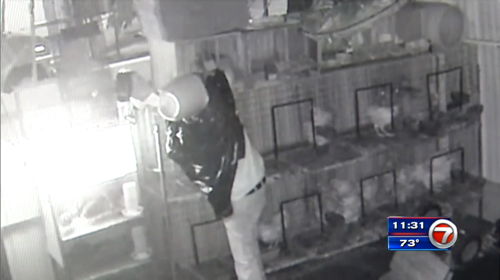 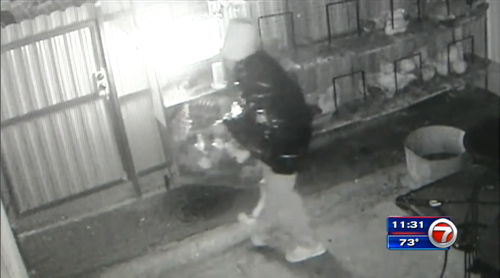 Not sure what the slugger prowess of stews has to do with running an airline. Nowadays, they could use a baseball bat for drunk-passenger control.

One for the weird death file: 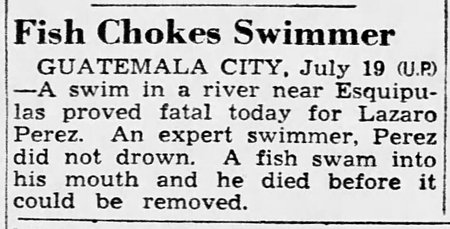 Fish Chokes Swimmer
GUATEMALA CITY, July 19 (U.P.) — A swim in a river near Esquipulas proved fatal today for Lazaro Perez. An expert swimmer, Perez did not drown. A fish swam into his mouth and he died before it could be removed.

This short note about Nazis mistuning French pianos ran in a number of papers in 1944. (The word 'turned' in the fourth line is evidently a typo and should be 'tuned'.) But I think there's more lurking beneath the surface of this story than one might suspect.

Time magazine (Oct 2, 1944) weighed in on the issue and suggested that "What they probably discovered were standard-pitched French pianos (A 435 vibrations a second), slightly jarring when played in combination with American-pitched instruments (A=440 vibrations a second)."

This then leads into the theory, popularized by Dr. Leonard Horowitz in his essay Musical Cult Control, that the modern adoption (in the mid-twentieth century) of A=440 Hz as the standard tuning frequency traces back to a plot in which Nazis, the Illuminati, and the Rockefellers collaborated. The aim of the plot was to herd populations into "greater aggression, psycho social agitation, and emotional distress predisposing people to physical illness" by making them listen to music tuned to a frequency that was both unnatural and jarring.

Horowitz advocated A=432 Hz as more natural and harmonious since it was "mathematically consistent with the Fibonacci series of numbers, and, therefore, universal design."

You can delve deeper into this rabbit hole of musical conspiracy theory here and here. Also check out the Skeptic's Dictionary article on Dr. Horowitz. 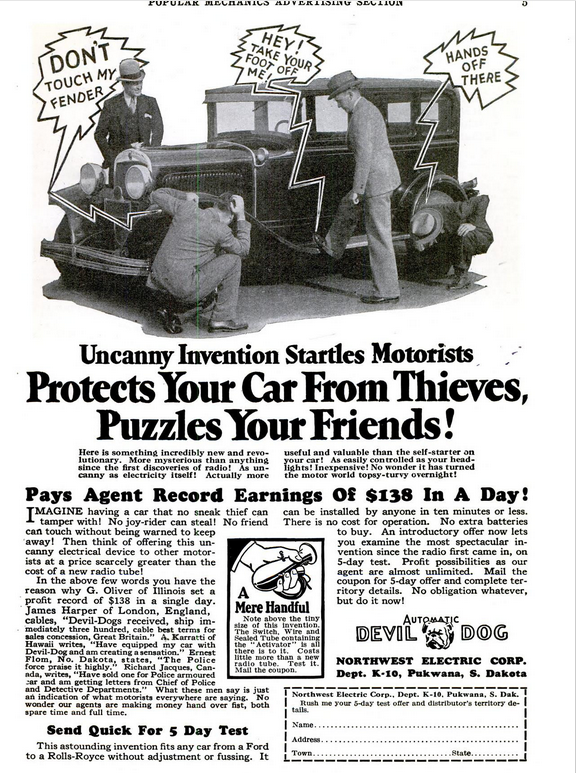 Contrary to the delightful ad, alarm did not speak phrases, but merely sounded the horn, as with modern car alarms.

From the Hyperallergic blog:


About a year ago, a conspicuously inconspicuous blue rectangle appeared amid the usual procession of selfies, news articles, status updates, event notifications, and advertisements in my Facebook feed... The rectangle was part of a project, “A Refusal,” by the early career artist who goes by the deliberately overdetermined name of American Artist. For a period of one year, American posted blue rectangles to his Facebook page in lieu of the photographs he would ordinarily post; the text portion of his status updates was similarly redacted, crossed out in black and unreadable. Viewers, an artist’s statement explained, could only see the actual, un-blue images by arranging to meet the artist in person.
For quite a while I've been engaged in a similar artistic endeavor. However, I've taken it one step further by not posting to Facebook at all. I call my project "An Absence." 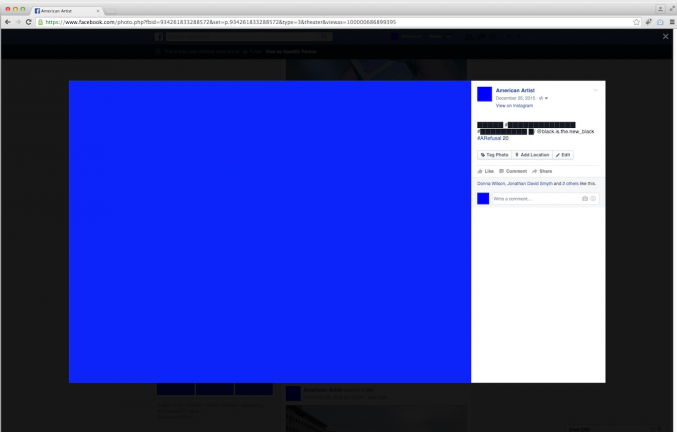