In line with the WU theme of "dangerous domestic animals...."

Anyone actually seen this?

Is anyone else reminded of the callers on Coast to Coast AM? 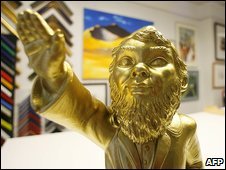