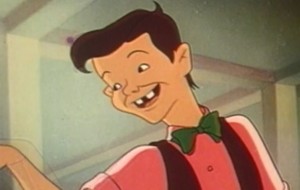 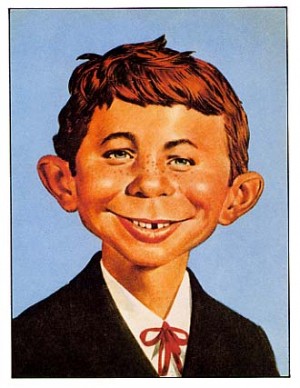 
Comments
I may be mad but, JO looks more like Huck Finn than AJ.
Posted by Expat47 in Athens, Greece on 01/14/13 at 10:07 AM
I think "Alfred E. Newman" shows signs of Fetal Alcohol Syndrome. Does anyone familiar with this disorder care to comment?
Posted by Josh Levin on 01/14/13 at 05:12 PM
No!
Posted by Expat47 in Athens, Greece on 01/14/13 at 11:51 PM
To have fetal alcohol syndrome he would have to have been a fetus. (psst, dude, he's a cartoon character)
Posted by Patty in Ohio, USA on 01/15/13 at 01:40 AM
What I'm trying to say is that the original character's looks might have been based on those of some "village idiot" who got that way because his mother drank while he was gestating.
Posted by Josh Levin on 01/15/13 at 09:56 PM
If village idiots were caused by Mom's drinking and smoking then all those millions of baby boomers would fall into that category.

Heard when I was young: Mad's Martin was the son-in-law of Carson-Newman College head Alfred Newman, and decided to pull his leg a little. The cartoon was popular, but not with some of Alfred's litigious relatives. The settlement specified the Germanesque namw change, among other details, but Mad was allowed to keep the beloved character.
Posted by Angie unduplicated on 01/20/13 at 01:36 PM
Commenting is not available in this channel entry.