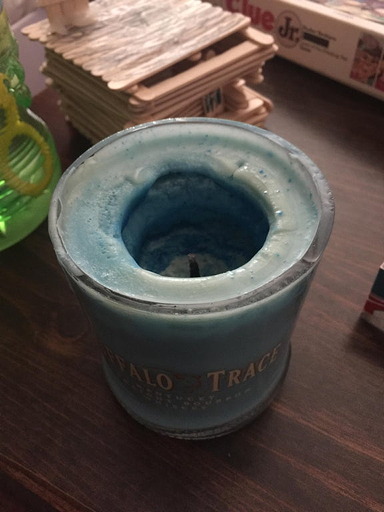 
Comments
My (late) parents retired to Lake Havasu City, AZ. There was a candlemaker's shoppe there, and they used "cores" of pure paraffin wax, with the outer bits something that burned at a hotter temperature. This is because the outer bits were differently colored layers which were twisted together, feathered, and otherwise used to create a pretty dust collector. When lit, the core burned down and left the outside deliberately.

Back in the 1970s, making your own candles in bottles using leftover wax or differently colored wax, then breaking the bottle was a thing. The "kit" sold a core with a wick already in it, running the length of the core. You guessed it, the core burned out, leaving the multi-colored wax behind. You could buy replacement cores to keep "your" creation functional, longer.


You’ve been given some incorrect info. The cause of tunneling is incorrect wick size. A serious chandler does extensive testing to find the correct wick size (and type), based on the container, type of wax, and fragrance. All those things can affect how it burns. (So for instance, two candles that are exactly the same size and same container can still burn differently because of the fragrance used.)
The size and type of wick can also affect what is called the “hot throw”, which is how much scent the candle gives off when it’s burning.
Posted by Sharon on 06/25/20 at 08:31 AM
What Sharon said!

How well you keep the wick trimmed as it's burning makes a difference, too.

Most good commercial candles use the absolute minimum wick, so it's possible to get a complete burn, but it's far from guaranteed.