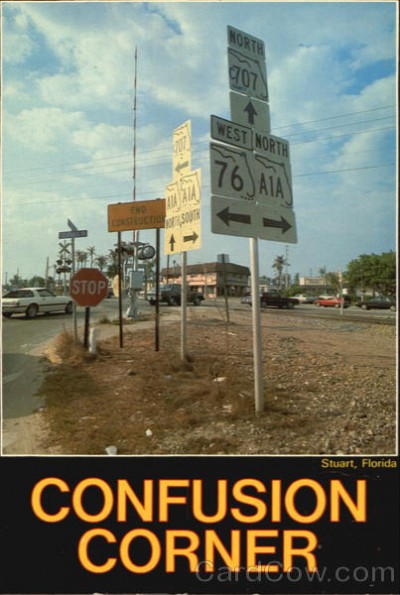 
Comments
Sorry, Paul, this isn't even in the running! I've got a 5way a block and a half from my driveway and I live in the sane part of town.
Posted by Expat47 in Athens, Greece on 07/06/15 at 06:53 AM
I agree with Expat47. Confusion Corner wouldn't make the top five confusing intersections in Massachusetts.

Look it is Floridua, so why should it surprise any one. Everything is confusing here. Even our Governor Scott has made the phrase "Climate Change" a word unacceptable to be used by state governmental employees.
Posted by Gator Guy on 07/06/15 at 04:15 PM
The only place I know anymore is going nucking futz ...

P.S. Patty and I had a nice extended holiday visit together WUvians. Whatever you can imagine doesn't come close to the real thing 😜 :red: . To Expat: Stay in the Emerald Isle ... Greece is more broke than me.
Posted by BrokeDad in Midwest US on 07/07/15 at 01:00 AM

BD, if I could have stayed I would have.... Those people KNOW how to fix bacon. Here's what an Irish Breakfast looks like.

BTW, I'm still working up the photos from the trip. When I get done I'll give y'all an invite to come and take a gander at them.
Posted by Expat47 in Athens, Greece on 07/07/15 at 02:23 AM
There does seem to be some confusion, though.
The "longer explanation" says there are seven streets there, the "concise" one says eight.
I count six, and that's being generous. (A commenter on the "concise" one points out it has changed since the 1982 article was written.)
There is a north-south street and an east-west street. I think most sources must be counting those as 4.
There is a street diagonal to the north-west, and one parallel to it on the other side of the railroad tracks that run north-west to south-east.

I think most of the confusion lies in the fact that the numbered highways do not go straight, so approaching from the south (say), sticking with the highway you want involves turning right, or left, or left at a diagonal.

At least there were some stop signs there. My home town featured a few 4-way intersections with no signage at all. My brother called them "go for it"s.
Posted by SpyOne on 07/07/15 at 07:51 PM
Commenting is not available in this channel entry.