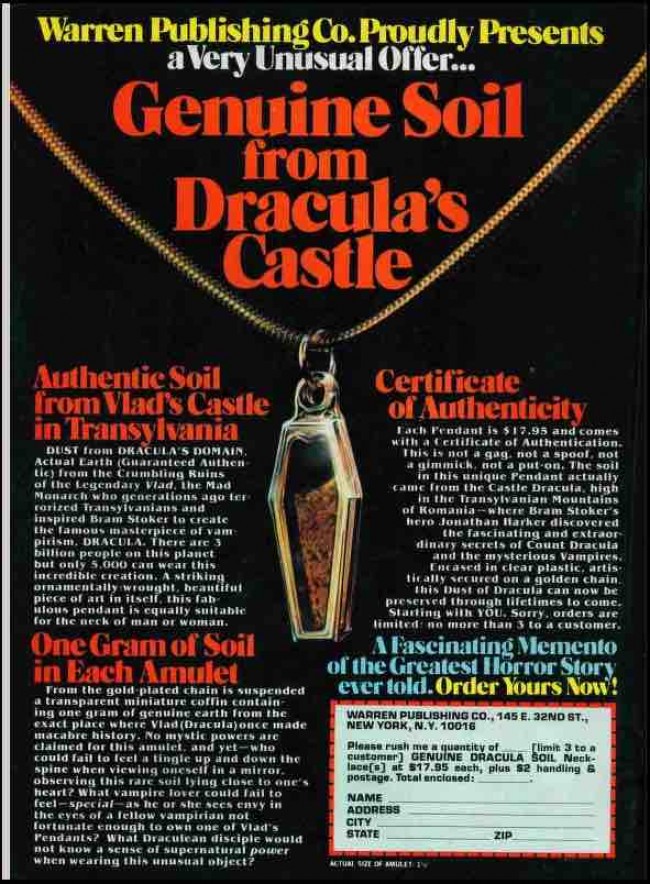 
Comments
Even if this vendor were honest - stop sniggering at the back, there - nobody knows where Vlad Dracul's actual castle actually was.
Posted by Richard Bos on 04/15/16 at 01:28 PM
You should peruse the adverts on the previous pages. I especially liked the offer for the Darth Vader snap together van model.
Posted by KDP on 04/15/16 at 02:33 PM
I can understand wanting a sliver of the true cross or a pendant with water from Lourdes in it. But why would someone want dirt from Dracula's castle.
Posted by Patty in Ohio, USA on 04/15/16 at 04:37 PM
Maybe they got the dirt here: Transylvania is an unincorporated community in East Carroll Parish, Louisiana. As of the 2000 census, the population of Transylvania is 743.
Posted by Virtual on 04/15/16 at 05:56 PM
I have some ash from Mt. St. Helens
Posted by BrokeDad in Midwest US on 04/15/16 at 05:57 PM
Many years ago, I was into metalcasting. One of the trickiest bits is finding a good release agent so the two parts of the mold won't stick together. Following advice I found in an old book, I went into my attic and swept up as much dust as I could from the rafters (it's really fine inorganic dust). It worked great, so I sought out other attics to raid for their dust. I also brushed dust from old statues, limestone walls, etc..

My sister, being as she is, started telling everyone my main accomplishment in life was collecting dust. She sent me 'dust' from Mt. St. Helens. Other friends/relatives around the country started sending me dust they collected in obscure places.

Sadly, the last time I checked, my dust collection had disappeared, probably the victim of one of my moves to a different state.
Posted by Phideaux on 04/15/16 at 08:40 PM


I've got some ancient Greek marble. In fact, I've oft thought to box and sell some of them to tourists. The profit would be, almost, 100% as our house is situated on a vein of the stuff and it's the #1 weed in the lawn. (Sorry, did I say 'lawn'? I meant weed patch.)

And the answer is: "NO! I's done all the 'gardening' I'm ever going to do by age 18. If she wants pretty weeds it's on her to figure out why they keep dying.)
Posted by Expat47 in Athens, Greece on 04/16/16 at 12:08 AM
Warren Publishing were the publishers of such 60s and 70s magazines as "Creepy", "Eerie" and "Famous Monsters of Filmland". The Dracula soil gimmick fits right into their business model. They were a pretty classy operation so the dirt probably did come from Romania and one of the castles associated with Vlad Tepes.
Posted by eddi on 04/16/16 at 12:41 AM
I've got a jar of red dirt scooped up from the site where we watched the sunrise on Uluru in Australia. I'll probably give it to the geology department at the local University branch, where it will probably languish on one of their dusty shelves instead of mine. At least that's a better fate for it than ending up in some landfill. I also have a 6 oz. specimen of the Sikhote-Alin meteorite that will go to their astronomy department, where it will likely suffer a similar fate. I also have several arrowheads and a spear point my dad found when he was growing up on a farm in an area that had been populated by Native Americans for over 2,000 years. That's the approximate age of the spear point, which I had dated at the nearby Indian artifacts museum. The arrowheads were only 200-300 years old, I was told.
Posted by Fritz G on 04/16/16 at 08:17 AM
Hey, I also have some Mt. St. Helens ash! We should start a club or something.
Posted by ges on 04/16/16 at 10:10 PM
Well, I've been to Mt. St. Helens, by golly. If y'all had told me this was coming, I could have scored my ash first-hand.
Posted by Virtual on 04/17/16 at 01:40 PM
Commenting is not available in this channel entry.