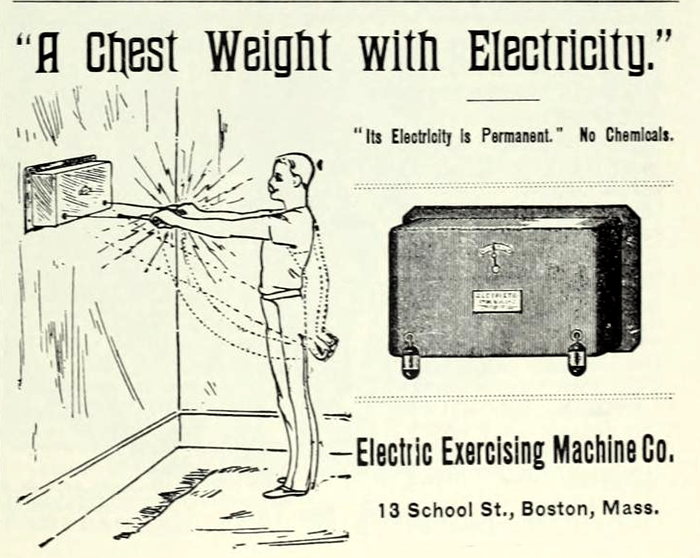 
Comments
It doesn't look like it produces electricity as "it can be used with or without electricity" and "it has no battery". The only way that could work is if the machine is plugged to the wall.
Posted by Yudith on 05/06/21 at 05:19 AM
Yudith -- I interpreted the lightning bolts coming from the people's hands as meaning that they're receiving a mild electric shock as they use the device. Also, the mention of foot and sponge electrodes.

Very few homes would have had electric wiring in 1890. So I assumed that the machine must have produced its own electricity.
Posted by Alex on 05/06/21 at 11:13 AM

Remember the T-handled dynamite detonators in classic movies and Roadrunner cartoons? Push the plunger, blow stuff up. They were basically a rod with teeth cut in it which mated with a gear to spin a magneto. When the rod hit bottom, it closed a switch to send a pulse of high voltage electricity down the wire.

I don't recall exactly when those were invented. I know it was sometime between the end of the Civil War and the beginning of the 20th Century. (If you ever saw that godawful movie with a soldier using one to blow a railroad bridge, that was one of a hundred stupid anachronisms.)

I suspect this box used the same basic principle. The cords were wrapped around cylinders, the cylinders were geared to a magneto, springs inside the cylinders retracted the cords (the same way a tape measure works).

Oh, and the "can be used with or without electricity" part probably means it's hard enough to pull the cords that it provides exercise even if you don't flip the switch to get jolted at the end of every pull.

Actually, it seems to me it's sort of an anti-exercise machine, providing intense negative feedback with every stroke.
Posted by Phideaux on 05/06/21 at 01:03 PM
The first illustration is pretty risque for 1890. Compare it to the film in the adjacent item "2 a.m in the Subway."
Posted by ges on 05/06/21 at 09:17 PM
Phideaux, I assume you're not looking askance at the detonator in "The Bridge on the River Kwai." <Spoiler coming> Recall that it was finally actuated by accident in the movie's climax.

This thing is a magneto for sure. "Its electricity is permanent" means that it comes if you pull the handle. It doesn't have a car-type battery, with hazardous H2SO4, or the like. (Sulfuric acid, for those that are Chemistry 101 challenged.) The cords & handle had to be steel, or something else conductive.

An nice option would be separate electrodes that you could directly attach to the body part needing functional improvement. You could also surprise a friend who is within reach of the electrodes.