He first made the news in 1931 when his wife sued him for divorce, claiming that he had attained "such a state of spiritual perfection" that he had lost all interest in her. In other words, he had decided to embrace celibacy. The two eventually reconciled, which is to say that they didn't get divorced, although they apparently remained separated. 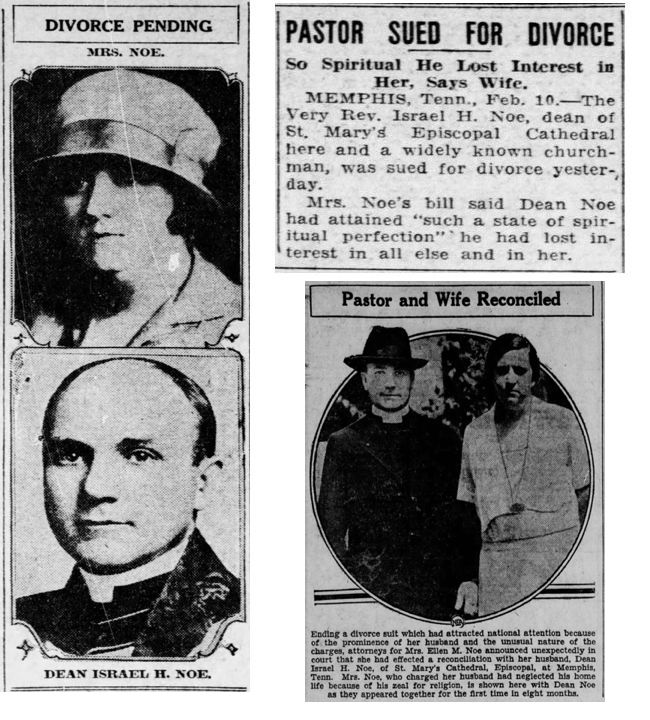 Seven years later, 1938, Noe was back in the news when he stopped eating to prove that man can live indefinitely on "spiritual sustenance" alone. Before he stopped eating entirely, he had supposedly spent the previous year living only on oranges. After 22 days of fasting, he fell into a coma, at which point doctors began force feeding him. 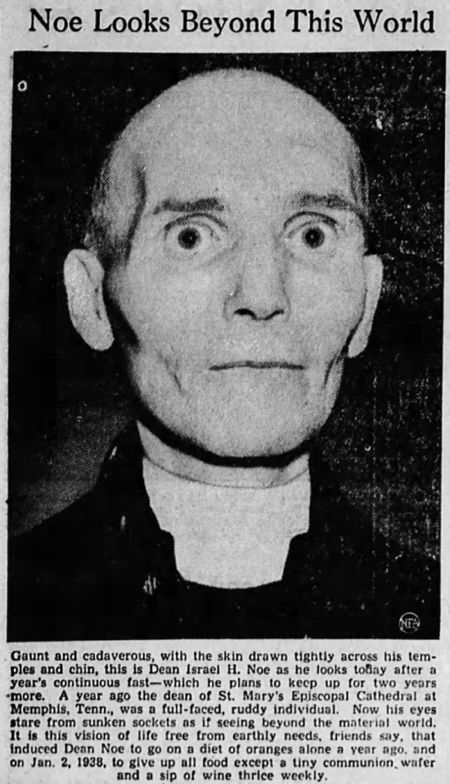 After recovering from the fast, Noe returned to preaching, but in 1951 was again making headlines with his claim that he had recreated the lost signet ring of King Solomon. He explained that he knew what the ring looked like because "I developed extra sensory perception until I was able to tap the reservoir of the universal subconscious mind."

Noe declared that he would give the ring to a "worthy wearer" who would then be endowed with "all power and knowledge of the universe — just like its original wearer, King Solomon." After a search, Noe eventually gave the ring to Rev. Canon Gottshall of Oakland, California, who never seemed to develop any special powers from it. 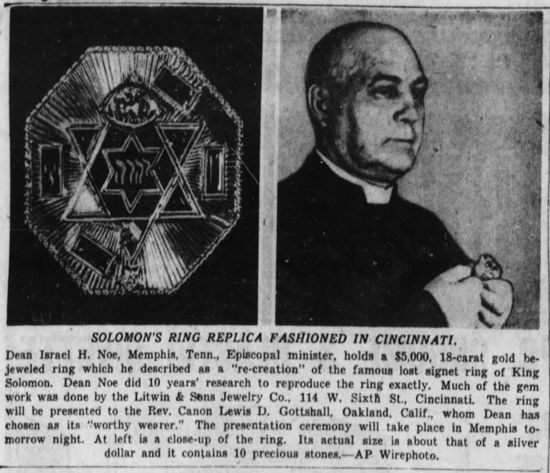 
Comments
For that 1938 picture, "Noe Looks Beyond ...", it would appear that he's seen beyond and it doesn't suit him.
Posted by KDP on 10/10/16 at 02:18 PM
Excessive religion can drive people mad.
Posted by Gator Guy on 10/10/16 at 04:39 PM
It's a fine line between religious and crazy.
Posted by Courtney on 10/10/16 at 08:54 PM
The alleged signet ring of King Solomon is totally bogus. There's no evidence that Star of David was used until as a Jewish symbol until many centuries after King Solomon.
Posted by ges on 10/10/16 at 11:14 PM
"Tapping the reservoir of the universal subconscious mind" apparently shouldn't be attempted without adult supervision.
Posted by Virtual on 10/11/16 at 12:50 AM
As to ges' comment, absence of evidence is not evidence of absence. The Star of David is really the "Shield of David" (Magen David). David's name, in Hebrew, is spelled Dalet-Vav-Dalet. In the paleo-Hebrew alphabet, the "Dalet" was a triangle with a short line coming off of one of the corners. Presumably, David's battle shield was a round shield, bearing overlapping images of the three letters of his name, with the two dalets forming a six-pointed star (hexagram), and the vav within the hexagon in the middle. Traditionally, King Solomon is reputed to have had a different "shield", a pentagram (five-pointed star).

What really shows that this "signet" is false is the ineffable personal name of God, written in Hebrew "square" characters, not the paleo-Hebrew characters in use at Solomon's time. The "square" alphabet is basically the same one used for Hebrew to this day, and wasn't introduced until the Babylonian exile.

For more information about God's Name and His other Appellations, check out http://www.Beth-Yithra.org and go to section 2, The Appellations of God.

Lastly, reputing such powers to an inanimate object is akin to idolatry. In contrast, the Urim and Thummim were simply communication devices by which God could express His desires to Man.
Posted by Joshua Zev Levin, Ph.D. on 10/11/16 at 12:37 PM


Anyway, whether the ring is genuine or not (hint: it isn't), anyone who has actually read the Bible, unlike this typical Southern Fried Baptist, ought to know that Solomon got his wisdom directly from God, not from some magickal doohickey. Claiming that Solomon was a magician rather than a wise man is more a Muslim tradition (there are stories about him locking djinn in bottles - yes, that's where that fairy tale comes from) and even with them it's, AFAIAA, more apocrypha than actually in the Quran. It's certainly not in the Bible.
Posted by Richard Bos on 10/12/16 at 02:48 PM
Commenting is not available in this channel entry.