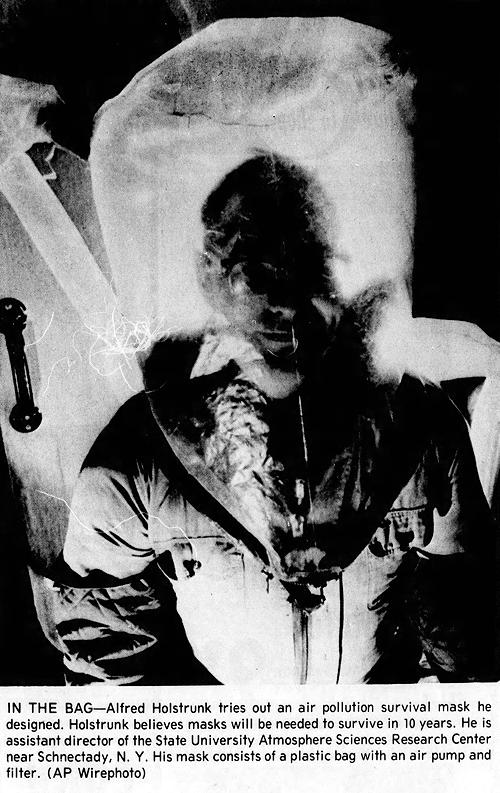 
Comments
Cranks like this guy didn't go away, they just became Global Warmunists. There's always a new doom to decry.
Posted by A Nonny Mouse on 08/08/16 at 08:20 AM
For those of you who have frame of reference, air and water pollution is presently much lower, with a greater population level, than when Holstrunk was spouting his predictions. I'm sure that he was relying on statistical extrapolation for his predictions, but as the saying goes, "There are three kinds of lies: lies, damned lies and statistics."
Posted by KDP on 08/08/16 at 09:15 AM
Hulstrunk also claimed to be able to effectively photograph people's emmissions and color code them depending on mood according to the link below:

Now that the future is here and the air quality is perfect everywhere on earth, we're quick to laugh at a guy who thought about a potential problem that might arise in the future and tried to do something to help us survive it. I hope we have a few more "crackpots" like him today who are coming up with unique contraptions that may or may not be helpful. If we're lucky, fifty years from now, we can laugh at them, too.
Posted by Fritz G on 08/09/16 at 07:41 AM
This danger was averted because Congress passed the Environmental Protection Act and President Nixon signed it into law.
Posted by John Ayer on 08/09/16 at 04:54 PM
And that law was passed at least in part because people like him warned about it. So yeah, he sounds extremist now, but that's only because his own predictions helped prevent them from coming true. It's a self-denying prophecy.
Posted by Richard Bos on 08/10/16 at 04:34 PM
To follow Richard's comment, that type of thinking is a "Post hoc ergo propter hoc" logical fallacy, partly because Nixon formed the EPA happened the same year as this article (1969).

Further, if you use that rationale, a lot of people predicted a whole lot of things that never actually happened. For example, there were warnings that New York City would fill up with horse manure due to the projected number of horses that would need to service the continually growing city following the end of the 1800's. It didn't happen, mainly due to the evolution of the motor vehicle. Did the predictor of the horse manure problem cause cars to be invented or have any hand in it?

The same can be said of people who predicted huge population explosions over the past centuries that never came to pass. Did them pointing out the possibility somehow prevent them from occurring?

The list goes on and on with that type of reasoning.

That would be an argument if he were a lone lunatic, but he wasn't. I can't find much on him himself before this, but scientists had been saying that we needed to clean up our act or face the consequences for rather longer - albeit in a less over-the-top way.
Remember the Great Smog of 1952? It took Westminster four years, but in 1956 they passed the Clean Air Act. And that wasn't because of some zany prophet predicting widespread deaths. They'd been predicting that for years, and nobody listened. Parliament finally acted because there were widespread deaths in London, and suddenly all those doom prophets were treated very deferentially.
The USA, at least, had the good fortune not to need such a shock to the system, but if anything, Nixon was late to the show. The ASCR itself was founded in 1960, after all (and still exists).

As for population explosions... have you seen images of Buenos Aires, Lagos, Shanghai and New York? We've gone from one milliard people in 1800, to 2 in the early 20th century, to almost 7½ today. That's one that's come true, and is coming more true every day. Be grateful food science has managed to keep up with our nutritional needs, at least for those of us in the western world.
Posted by Richard Bos on 08/20/16 at 03:48 AM
Commenting is not available in this channel entry.