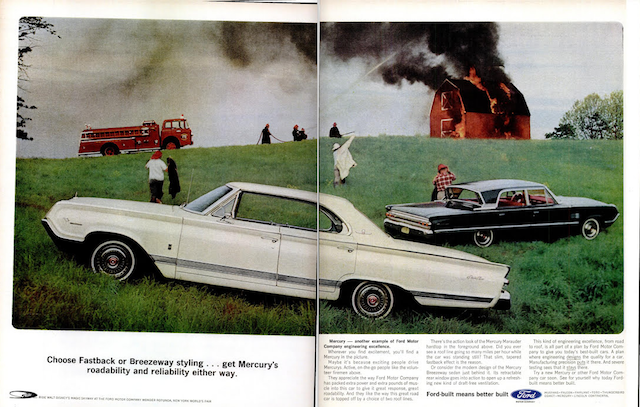 
Comments
That Marauder nameplate is somewhat rare in the Mercury line. Uncle Dave had one and held on to it for years. Never would sell the thing or give it to the kids and it ended up parked under the back porch of his two floor house after he stopped driving. The rats and field mice finally did it in and my cousins had it sold off for scrap after he died. The Breezeway model shown was the more common body style.
Posted by KDP on 03/23/17 at 03:14 PM
Apparently, they didn't have enough "roadability" for people to keep wanting them.
Posted by Virtual on 03/23/17 at 05:07 PM
Reminds me of a car ad that ran about 15 years ago (BMW, maybe?) that featured a couple in a car narrowly avoiding a collision with a motorcycle. The motorcyclist wipes out, but the car kept on going. After people pointed out the general douchbaggishness of the whole thing, they dubbed in a voice at the very end saying "Let's turn around and make sure he's okay."
Posted by Brian on 03/24/17 at 12:36 AM
Mercury brought the Marauder back in 2003, but it didn't last long.
Posted by RobK on 03/24/17 at 11:26 AM
I had a Marauder very similar to the one above, except it was a '63. It was a 25th anniversary limited edition with all the seats and door panels having the 25 logo. It would be worth a lot now.
Posted by joe on 03/24/17 at 12:27 PM
Virtual: That's because they weren't cars, they were road boats.