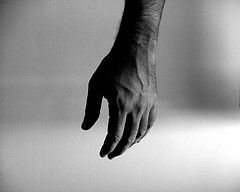 Emergency medical technicians often have to figure out if a patient is really unconscious, or if they're faking it. One of the techniques they use to do this is the "hand drop" test. Steve Whitehead of theemtspot.com describes it:


Without warning, we gently pick up the patients hand and hold it above their face. Without delay, we drop it. If the patient were truely unconsious, the hand would fall and strike them in the face. Most likely on the mouth or chin. We’re not going to let that happen, but the patient doesn’t know that.
Steve notes that the test is remarkably reliable, and the reason this is so is because:


Patients don’t know what their hands are supposed to do when dropped over their face and the idea of striking themselves is instantly unappealing. But what to do instead? The resulting dilemma is both revealing and, often, hilarious. The amusing nature of watching a conscious patient decide what to do with their falling hand is certainly part of the popularity of this exam.
However, he warns that there are patients who have "played the game before" and may be able to fake a convincing response even to the hand drop test. In an article on "Faking Unconsciousness" in the journal Anaesthesia (April 2000), the author noted:


During a ‘hand drop’ test, to my astonishment, I have caught the glimmer of a smile and realised that this patient knew too much. She had indeed read the literature.


Comments
Based on my experience in the field. The trick is to gently move the hand over the face and drop it on to the nose from about 6 inches above the nose. Even if awake the patient will not let the hand hit their nose. The face yes, but the nose no.
Posted by Steve E. on 03/14/17 at 01:09 PM
There is also a hand-drop test for stroke. I witnessed it, years ago, when I was being treated for a smashed ankle, and was in a ward with seven other male patients. The guy at the bed perpendicular to mine apparently had a stroke overnight. The head nurse raised his right arm, and let it drop to his side, and it fell like dead meat. She immediately ran to get a doctor.

Years later, my female roommate fell while getting out of the shower. The bathroom was so cramped I couldn't use the conventional tests (FACE) to try to detect a stroke. So I tried the hand-drop test on her left arm, and it fell like dead meat. I then called 911. She recovered and is still alive.
Posted by Joshua Z. Levin on 03/16/17 at 07:54 PM