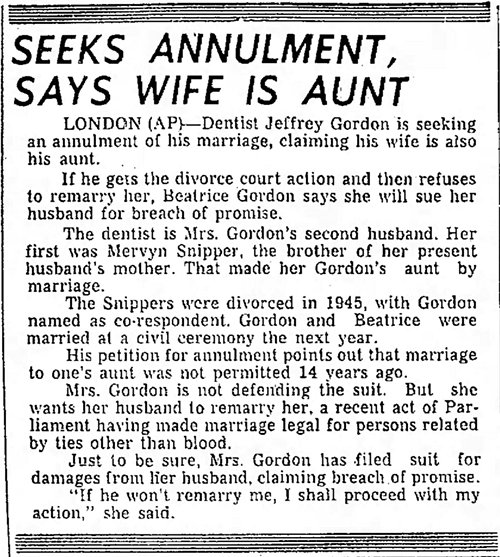 
Comments
There once lived a man named Oedipus Rex.
You may have heard about his odd complex.
His name appears in Freud's index
'Cause he loved his mother.

:sick:
Posted by BrokeDad in Midwest US on 12/18/14 at 04:21 PM
The way I read it, he wanted to dump her and just grabbed at a quick legal way to get it annulled. She apparently didn't want him to dump her.
Posted by AdamsonScott on 12/18/14 at 05:56 PM
This sounds like lawyers (or whatever they're called in UK) making hay for unnecessary legal work.

When they were married (14 years ago) there was a law forbidding marriage to any relative but that law was changed/corrected to forbid marriage to blood relatives only. Hence, the aunt, by marriage, was fair game. (or maybe fairly gamey)
Posted by Expat47 in Athens, Greece on 12/19/14 at 01:41 AM
But if the marriage wasn't legal back when, it presumably doesn't need an annulment, and they just have to get married, only legally this time. I think Adamson has the right of it.
Posted by TheCannyScot in Atlanta, GA on 12/19/14 at 09:24 AM
I wonder how long the quaint notion that you can't marry a blood relative will last.
Posted by RobK on 12/19/14 at 11:18 AM
I don't give a damn how many laws they change I ain't marrying my brother!
Posted by Expat47 in Athens, Greece on 12/19/14 at 11:20 AM
RobK: it's not really quaint. It's there mainly to prevent two things: child abuse ("yes, officer, my twelve year old daughter really does want to marry her father"), and inbreeding (not a problem with one cousins' marriage, usually, but after eight generations...).
Posted by Richard Bos on 12/22/14 at 06:43 AM
http://www.futilitycloset.com/
Scroll down and you will find the story of a man who committed suicide because he is his own grandpa.
Posted by BMN on 12/22/14 at 04:45 PM
@BMN: I do believe that you have been engaging in way too much feces-kicking music. Watch This
Posted by Expat47 in Athens, Greece on 12/23/14 at 12:13 AM
Commenting is not available in this channel entry.