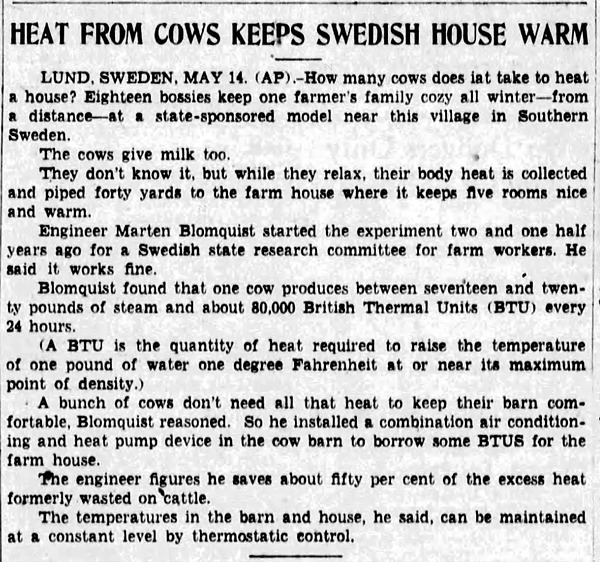 
Comments
You could get by with fewer cows if you also burned their farts.

I mean... it was part of how they did do it, back in mediæval times. Build the cowshed up next the wall of the farmhouse, and all that. It's all very well for gentlemen farmers who can afford a central chimney and a separate byre, but crofters didn't have that luxury.
Posted by Richard Bos on 10/17/20 at 11:33 AM
One of the saddest failures of technology, in my opinion, is no one yet finding the magic bullet to make widespread use of methane digesters viable.

The methane generated from the manure of sixteen dairy cows would yield approximately 375,000 BTUs per day. Depending on location, that might fall far short of what's needed to heat a house in winter, but it could be compressed and stored during other seasons until it's needed.

@Richard -- It's my understanding that houses of Medieval peasants were mostly one room. In winter and during bad weather, livestock were at one end, people at the other. Although chimneys were known in England as early as the late 12th Century, they didn't come into common use until the Renaissance.
Posted by Phideaux on 10/17/20 at 01:09 PM

My mother used to subscribe to a magazine titled "Mother Earth News" which was sort of a journal of the back-to-earth-hippies of the 1970s. Something like the Whole Earth Catalog published on a monthly basis. The magazine was chock full of ideas like this along with generating your own electric power, animal husbandry for food and profit and automobiles converted to burn methane and grain alcohol. I haven't seen an issue in years.
Posted by KDP on 10/17/20 at 05:24 PM
@Phideaux - yes, that's what I mean. Peasants were all one room, or one room and a washroom, with livestock and humans generating heat together. It was only if you were richer that you could build your house around a massive brick fireplace with enough heat capacity that it could radiate warmth through several rooms and you wouldn't have to keep the animals in your own quarters any more. Or did that only come in with the Tudors?
Posted by Richard Bos on 10/18/20 at 07:27 AM
@Richard -- It's my understanding (from research done long, long ago after an Editor called me to task for having an anachronistic fireplace in a Medieval home) that very wealthy city-dwelling merchants were the first commoners to have fireplace chimneys, and that was on the cusp between Late Middle Ages and Tudor Period. It took a long time for them to filter down to the merely rich and out to rural areas.
Posted by Phideaux on 10/18/20 at 12:49 PM
@KDP -- "Mother Earth News" is still a going concern, both as a print magazine and as a website. Today, I saw an issue in the rack at Tractor Supply while I was getting a sack of corn.
Posted by Phideaux on 10/18/20 at 02:47 PM
@Phideaux: I'm a century or so out, then.
Posted by Richard Bos on 10/24/20 at 07:02 AM
Commenting is not available in this channel entry.