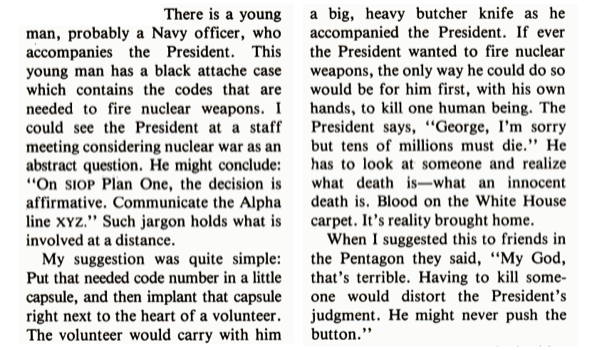 
Comments
Well, that may just work but just because getting blown to smithereens and not retaliating isn't war it also isn't what I'd call "a good idea".

Now, if we (they) had listened to Patton there may not have been a threat of nuclear war.


Sounds like this was ripped right out of the "Dr. Strangelove" script.

President Merkin Muffley: I will not go down in history as the greatest mass-murderer since Adolf Hitler!

If you really want to prevent it, put the capsule containing the codes next to the PRESIDENT'S heart and force him to sacrifice himself! That's the only way that scenario would work.
Posted by Kyle Morgan on 07/09/15 at 11:35 AM
Until the other side DOESN'T.
Posted by Expat47 in Athens, Greece on 07/09/15 at 12:42 PM
The danger in that plan is that there are zealots in the world who deeply believe that killing and dying for their Cause is a 'good' thing, and now they can rise to positions of power with access to nuclear weapons.
Posted by tadchem on 07/09/15 at 12:50 PM
Commenting is not available in this channel entry.