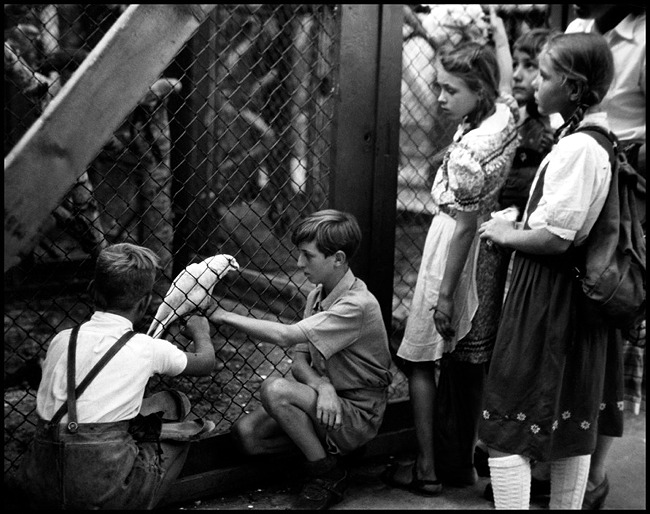 The zoo had acquired Laura at the beginning of 1949, buying her from a dealer in Hamburg for DM 120. This represented a large purchase for the zoo, which was extremely tight on funds following the war, but the zoo officials had decided that children would enjoy seeing a parrot, and that it might entertain crowds by talking. So they paid the money and placed Laura in a newly renovated cage.

Laura said nothing intelligible during her first week, leading the staff to fear that she wouldn't be a talker. But during the second week she revealed her vocal abilities, though in an entirely unfortunate way. As her caretaker, Joachim Herzner, entered her cage for her morning feeding, she greeted him with a cheerful "Heil Hitler!" Herzner initially wasn't sure if he had heard her correctly, but then she repeated the phrase, leaving absolutely no doubt.

It soon became clear that Laura's "Heil Hitler" wasn't a one-off performance. It was her favorite phrase, which she repeated over and over. She regaled everyone who approached her cage with it, including the children and American soldiers who were frequent visitors at the zoo. 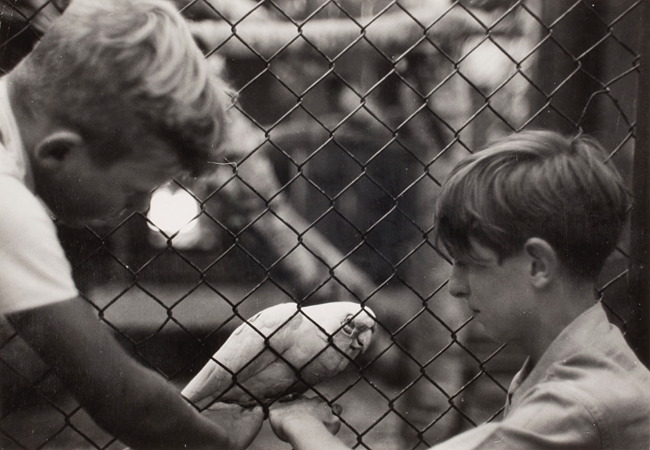 The zoo staff were understandably horrified, since they were no Nazi sympathizers. To the contrary, they had done whatever they could throughout the war to undermine the Nazis. At one point, near the end of the war, after the Wehrmacht had blockaded a local bridge into the city with an overturned tram, the zoo had sent one of its elephants, Lelabati, to remove the blockade.

And to the staff's mortification, word of Laura's unusual talent soon began to spread. By the end of January, her Heil Hitlering was making headlines in papers around the world. The Christian Science Monitor opined that Laura's trick was a "weird cacophony" of the comic and sinister. And the Mansfield Ohio News-Journal noted that it seemed to be "poetic justice that a parrot should be the last surviving public spokesman for the beliefs of Hitler and his ruthless henchmen [because] the man who would make slaves of people first tries to train them parrot-like to repeat what he tells them." 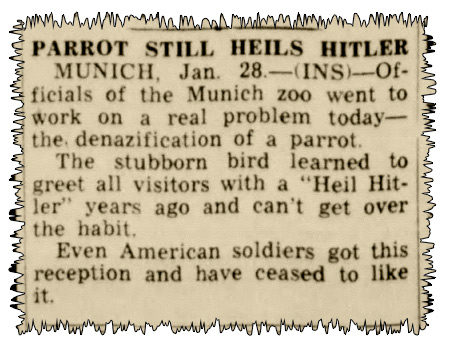 The media attention helped to boost attendance at the zoo, as people came to see Laura, thronging around her cage, trying to encourage her to say her signature line. The zoo staff appreciated the crowds, although they realized, to their dismay, that they had inadvertently become hosts for a "cheerleader for the führer."

Zoo officials also worried that Laura's Heil Hitlers weren't just an embarrassment. Because of the anti-Nazi laws, they might actually be illegal as well. Her keeper wondered if he might be forced to put her down.

To clarify the situation, the zoo officials consulted with Allied authorities who admitted that a nazi-saluting parrot wasn't a situation they had anticipated when drawing up the denazification plans. Eventually it was decided that Laura could remain on display as long as the zoo made an effort to denazify her. Which, of course, was easier said than done. Her keeper, Herzner, had no clue how he was supposed to de-nazify a parrot.

The strategy he came up with was two-pronged, involving both punishment and reward. The punishment took the form of laughing loudly in Laura's face whenever she 'Heil Hitlered.' The reward consisted of the introduction of a younger male parrot, Max, into her cage, in an attempt to get her to expand her repertoire. 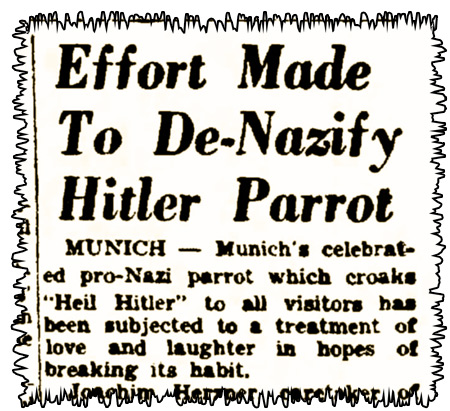 Initially this seemed to work. She became very attached to her companion and would ask "Where's my Max?" whenever he wasn't around. When he returned she would say, "Here's your Laura." But unfortunately, zoo visitors kept undermining Herzner's de-nazification efforts by constantly encouraging her to say the forbidden phrase. So her Heil Hitlering continued.

And then zoo officials discovered, to their horror, that they possessed another Nazi-saluting animal: an elephant named Stefi. During a Sunday display for school children, Stefi raised her trunk in imitation of the Nazi salute when she heard someone in the crowd say "Heil Hitler." The children realized that Stefi repeated the trick every time she heard the phrase, transforming what was supposed to be an educational event into a "grotesque performance" (as the media put it). Mortified zoo officials theorized that Laura and Stefi must have been taught their Nazi-saluting tricks by "diehard Nazis" during and after the war.

The story of Laura took a strange twist when, at the height of her fame, on February 1, 1949, she disappeared from her cage. The zoo informed the press that someone had kidnapped her, but a few weeks later she was quietly returned. Had she actually been stolen, or had the zoo moved her out of her cage until the public's fascination with her died down? Based on the meager press reports from the time, it's impossible to know. 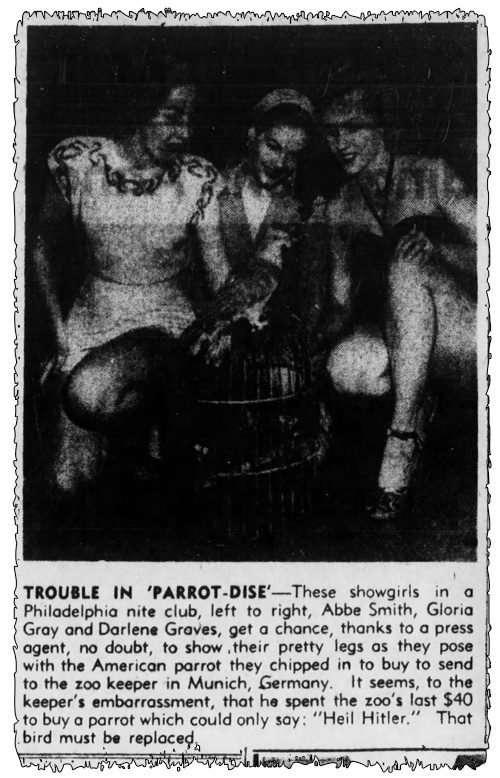 But the news of Laura's disappearance had inspired a group of dancers at Philadelphia's Latin Casino to pool their money and buy a new parrot for the zoo: a green one named Schnozzola, which they shipped to Germany on a TWA plane. The zoo happily accepted the donation and soon reported back that Schnozzola was a "whimsical humorist." His two favorite phrases were, "I love my wife, but oh you kid," and "Buy American all the way." So the Zoo ended up with both pro-Nazi and pro-American birds. In this way, it achieved political balance in its parrot cage.

Comments
Hitler was walking the streets of Germany again last weekend. Well, an actor dressed as Hitler and the local's reactions will surprise you (or not if you're following the recent invasion.) Read This
Posted by Expat47 in Athens, Greece on 10/12/15 at 10:31 AM
We had a neighbor who owned a mynah that would scream "I'll tell the welfare worker!"
Posted by KDP on 10/12/15 at 02:38 PM
About Expat's link- That is chilling. Who was it that thought a united Germany was such a good idea?? They were on the bad side of both world wars and attitudes have apparently not changed much.

We had a parakeet that learned to "ring" a friend's door bell when he stayed with them for a couple of weeks. They, too, responded each time! Georgie was one in a million.
Posted by Expat47 in Athens, Greece on 10/13/15 at 10:57 PM

Your friend were probably pissed at the neighborhood kids till they figured it out.
Posted by Patty in Ohio, USA on 10/13/15 at 11:28 PM
All our parakeets ever did was make a mess and do some chirping. I did have a friend with an African grey that spoke about 25 words.
Posted by GFnKS on 10/16/15 at 10:45 AM
😛 That is a bare Eyed cockatoo from australia.

NOT a south american parrot!


https://www.google.com/search?q=bare+eyed+cockatoo&client=opera&hs=RhS&source=lnms&tbm=isch&sa=X&ved=0ahUKEwic_JvatongAhVHd6wKHSAIAkIQ_AUIDigB&biw=1326&bih=665
Posted by billy bob Thornton on 01/25/19 at 11:13 AM
Commenting is not available in this channel entry.