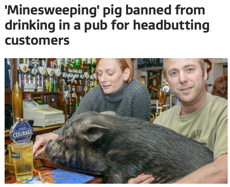 That's the headline, as it appears on ITV News.

When I first saw it, I figured it must describe a pig used to help find landmines, that for some reason was no longer allowed to drink in a pub whose clientele enjoyed headbutting each other.


Comments
I was visiting a friend the day before Christmas many years ago. We went to visit a old farmer he knew to pick up a couple of bottles of home brew. He had been feeding some of it to his pigs because it was Christmas and there was no one else to drink with.
Even with 4 wheel drive, they had very bad steering.
Posted by BMN on 03/25/15 at 09:16 AM

Journalists in this day and age aren't required (obviously) to know how to use the language. All that is required is a vocabulary of adjectives and verbs that can be used in given situations regardless of how accurately they present the facts as long as they titillate the audience.

Example... The word of the day is 'plummet'; as in the plane plummeted into the mountain. The problem here is... the plane was on a respectable glide path all the way down. There was no plummeting involved.
Posted by Expat47 in Athens, Greece on 03/25/15 at 10:38 AM

My mother was a proofreader for a newspaper. She enjoyed collecting such grammatical ambiguities as the headline above. She was especially amused by the 'misplaced modifier' which is seen when an adjective or prepositional phrase is dislocated from its referent by an intervening word or phrase, making it unclear what the referent was.
A particularly dramatic example in her collection was "Woman Sentenced to Ten Years In Bludgeoning For Participation" - and you though corporal punishment was passé.
A competent editor would have rewritten the headline: "Minesweeping pig banned for headbutting customers in a pub."
Posted by tadchem on 03/25/15 at 12:58 PM