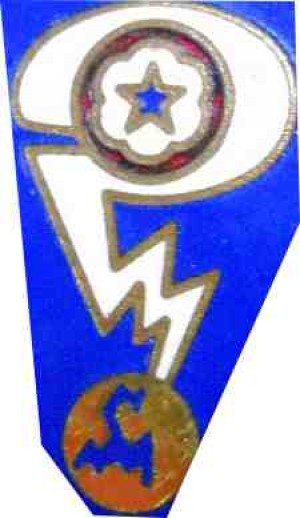 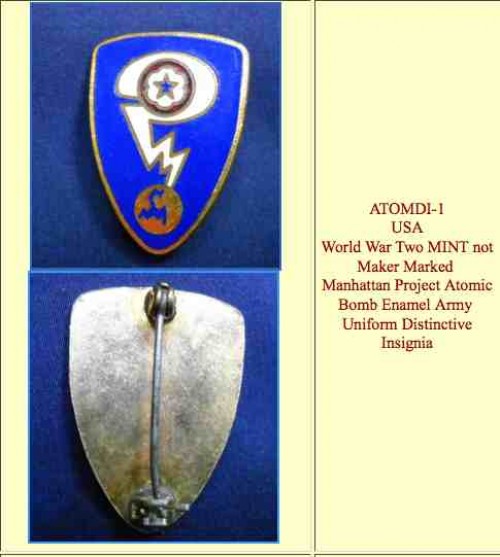 Comments
Well, it wasn't an attack on Hogwarts after all.
Posted by Expat47 in Athens, Greece on 10/21/15 at 09:10 AM
I guessed the correct basic idea, but discounted it as being too obvious. Even knowing the answer, the letter M still bugs me.
Posted by TheCannyScot in Atlanta, GA on 10/21/15 at 10:07 AM
Canny Scot--are you thinking the blue squiggle on the lower circle is an "M"? I thought so too. Then I decided the lower circle was meant to represent a very crude globe of Planet Earth, with the water being the oceans, and the atomic flame rising into the heavens.
Posted by Paul on 10/21/15 at 11:04 AM
I thought the design was from the 5th Assault group (from the 5 points on the star) from the Planet Mongo. The is a landmass on the planet looks like the planet's landmass and the "M" shaped bolt stands for Mongo. Where is Flash Gordon when we need him? Is he with Dale Arden or Professor Zarkov?
Posted by Jeff on 10/21/15 at 11:34 AM
Well, I wasn't too far off base. I was thinking a nuclear strike, perhaps Nagasaki. What's the shape in the circle at the bottom? A radioactive scorpion or something? Maybe it's NM for New Mexico (where Los Alamos is)?
Posted by Miles on 10/21/15 at 01:09 PM
I was close with having to do with the atomic bomb. I thought it was for the flight crews over Japan. It is vaguely mushroom shaped and the star is similar to the markings on the Enola Gay. The figure in the circle could be a dragon and if the circle had been red, it would have been the flag of Japan.

I question the origin of the pin. Los Alamos / Manhattan was the most closely guarded installation in the whole war effort. Personnel would hardly wear a decoration like this off base which could give away their top secret assignment and it would be superfluous as an identifier on base.

Perhaps it was designed and made after the end of the war as a souvenir for those who served in the effort. However that would hardly make it a WW2 relic.
Posted by KDP on 10/21/15 at 03:58 PM

Did you say its from the movie "Flesh Gordon" Jeff? :lol:
Posted by Patty in Ohio, USA on 10/21/15 at 08:25 PM
I agree with KDP. Absolutely NO distinctive insignia were made for the military members participating in the Manhattan project during the war. In fact, most unit-specific patches and pins in general were removed from Army uniforms throughout the war, to hinder foreign intelligence gathering. If these pins were actually associated with the Manhattan Project, they must have been created after the end of WWII as a commemorative.
Posted by danny56 on 10/23/15 at 02:38 PM