I imagine you could cobble together such a rig fairly easily, if you had the right skills, and do a lot of illegal rail-riding even today. 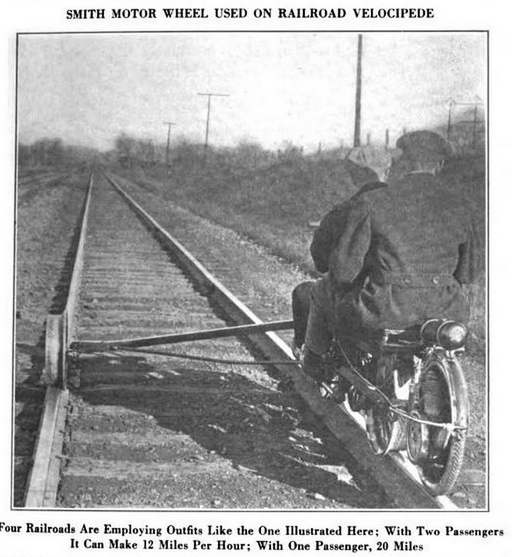 Essay from which above foto drawn is here. 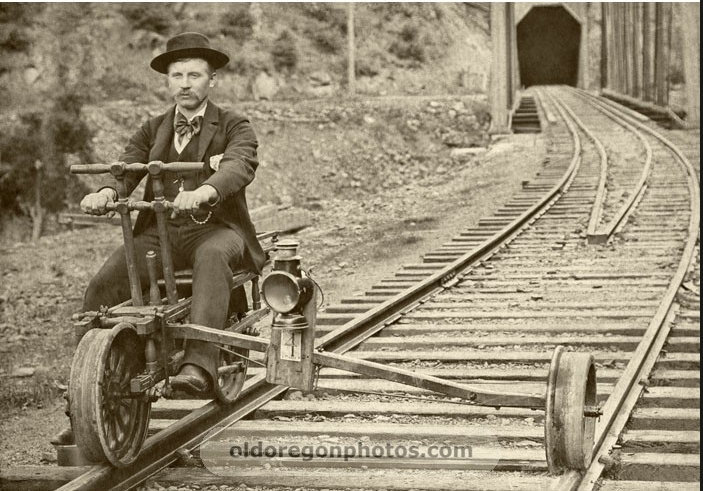 
Comments
Do not try this except on abandoned tracks. Railroad tracks are considered private property by the law dogs. I have gone to Yimmy Yohnson's alma mater in Marla Trump's hometown for having the temerity to walk on the siding alone. They will plea bargain murders, manslaughters, rapes by the hundreds, but not "criminal trespassing" on the tracks.

I'm not too sure how stable this thing is. What's to keep it from over balancing to the right while pumping?
Posted by Expat47 in Athens, Greece on 12/11/16 at 11:42 AM
@Expat -- The outrigger wheel is heavy and at a distance, so there's great leverage.

@Angie -- Since it's involved in interstate commerce, there are Federal laws against trespassing on railroad right-of-ways. Just like bank robberies, the Feds usually let local cops handle it, but they can make it really rough on you if/when they want to.

This bring a new meaning to the term heavy metal vehicles.
Posted by Gator Guy on 12/11/16 at 07:08 PM
I am a guy that wonders what the the extra rails shown on the bottom photo are for. I know that specs of the south end of a horse going north do get into space.
http://www.astrodigital.org/space/stshorse.html
Posted by BMN on 12/12/16 at 04:25 AM
If you consider that a single derailed train could kill dozens, you can kind of see their point. And trains do not stop. Don't play on the tracks, children.
Posted by Richard Bos on 12/12/16 at 04:39 AM
I'm thinking the extra rails shown in the bottom photo were to offer a choice of a different track gauge going thru the tunnel. Perhaps there was a switch, cut off the right side of the pic. Maybe they were only concerned about the difficulty of modifying inside the tunnel, once built. Why switch it either right or left? I give up.
Posted by Virtual on 12/12/16 at 02:24 PM
Bos is almost there with his comment about the center rails crossing the bridge. Those are rerailing or anti-derail, depending on how you look at it. Their purpose it to keep the trucks on within the rails in case of a derailment. The last place you want a car jumping the rails and rolling off / tipping over the embankment is upon a bridge. Replacing damaged ties is a lot less expensive than replacing the whole bridge. As Bos said, train traffic cannot be held up because of lost revenue.

Virtual, there were companies that ran dual gauge trackage and you would then see a three rail setup. However, narrow gauge trackage is found largely in mountainous areas where clearances are limited and speeds are slow and steady. Dual gauge trackage would be found at exchange points on the road where freight would be transferred. In some cases, believe it or not, there was rolling stock built with adjustable trucks to allow the car to be used on either gauge track, thus eliminating freight transfer. Those cars usually were moved for limited distances at moderate speeds.

Whoa, that was long winded for a simple question.
Posted by KDP on 12/12/16 at 04:55 PM
I'll be damned. Another thing here that puzzled me is the dual handlebars. Although I'm not a country boy or train guy, I'm thinking you would brake this contraption by pulling back the handlebar lever. If there are two people riding, they both have a way to grip it. More pull is needed to overcome the additional momentum due to the second person.
Posted by Virtual on 12/12/16 at 10:42 PM
@Virtual -- You push and pull on the handlebars to make it go. The top handles are to give you a little bit more leverage when you're starting from a dead stop.
Posted by Phideaux on 12/13/16 at 12:09 AM
Hmmm. The motorized drive train on the one in the top picture was staying with me. Must have been the result of staring at those rails too long.
Posted by Virtual on 12/13/16 at 11:39 AM
I'm pretty sure the motorized adaptation kept the original mechanism (though it's hard to tell from the photo). Can you imagine trying to push the thing home from the middle of nowhere if the engine conked out?

Other than making it a little easier when carrying a passenger, I really don't see the need for an engine on one of these. Getting up to speed is a little strenuous, but it doesn't take a whole lot of effort to keep it going.