Created in 1991 by Australian philosophy student Richard Manderson. They were Jesus-shaped chocolates filled with raspberry jam so they would "bleed" when bitten. 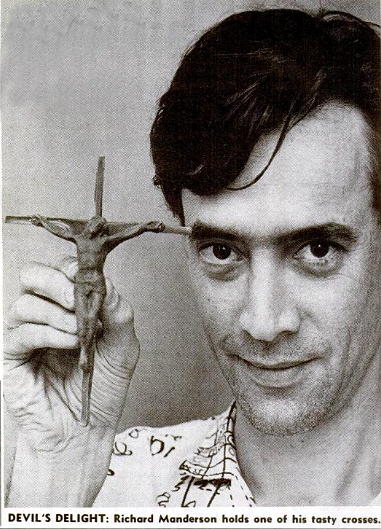 When a US newspaper condemned his act of depicting Jesus on a chocolate, Manderson decided in answer to create an actual life-size chocolate Jesus he called Trans-substantiation 2. He did so by filling a plaster mold with fifty-five pounds of melted chocolate. He used chocolate-dipped strings for hair and plastic Easter wrap for a loincloth. Manderson's work was exhibited in public around Easter in 1994, with Manderson inviting the public to come and eat his chocolate Jesus work after the exhibition.
The Jesus Question blog delves more deeply into the history of chocolate Jesuses.


Comments
I wonder if the men who were crucified actually were wearing loincloths, or if it was just their naked bodies nailed to the wooden crosses. So we're supposed to think it was okay to watch a man slowly dying in agony, but having his private parts visible would have been just too shocking to behold? There are lots of ancient statues of completely naked men that have survived to this day, so nudity wasn't that big of a deal then.
Posted by Fritz on 05/15/20 at 07:35 AM
I read once (I cannot remember the book, but it was probably a Bible commentary) that crucified persons were hung naked, as public nudity among Jews was considered shameful. If this is so, it would be to embarrass and humiliate the person being punished. If anyone else has accurate information about this, please share it with us.
Posted by Patrick98 on 05/15/20 at 08:59 AM
I could imagine artists feeling funny depicting Jesus’ privates, hence the loincloths. But I’ve understood as well that crucifixion victims were typically naked. Since crucifixion was meant to be a warning to others, humiliation was part of the punishment, as was desecration of the body. Victims were typically denied proper burials or cremation, and were instead tossed on garbage heaps to be eaten by wild animals. Which makes Jesus’ case unusual, as his body was recovered by Joseph of Aramethea and properly entombed.
Posted by Brian on 05/15/20 at 11:06 AM
Thanks for the thoughtful replies. I wonder if females were crucified, and if their bodies would also have been covered. I suspect any woman whose punishment was death would also have been naked.

I can imagine the outrage some prudish people might feel if the full-sized depictions of Jesus on the cross in churches showed him naked. He would also have to be shown as uncircumcized, I think.
Posted by Fritz on 05/15/20 at 12:40 PM

You forget that Jesus was a Jew. His depiction would have been circumcized.
I'm sure that women, who didn't have man's rank in society, would not have been crucified. They would have been stoned. As for Jesus, maybe licorice pubes would do?
Posted by Yudith on 05/16/20 at 05:57 AM

Edgelords clearly didn't start with the Web.
Posted by Richard Bos on 05/16/20 at 07:14 AM
Because it caused a slow, agonizing death, crucifixion was considered the harshest punishment the Romans could hand out. To a victim, being naked was surely the least of their worries. :(
Posted by Brian on 05/16/20 at 12:45 PM
Got curious and found this web site with some information regarding women being crucified: https://history.stackexchange.com/questions/23954/could-women-be-crucified-under-roman-law
Posted by Steve E. on 05/17/20 at 02:13 PM
Commenting is not available in this channel entry.