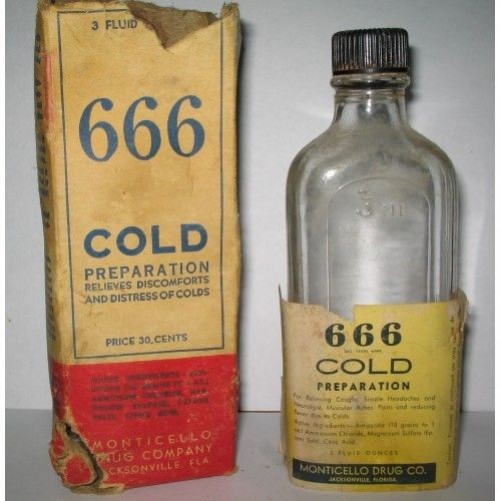 " Invented by our founder Tharp Spencer Roberts, 666 cold remedies were originally patented as “Roberts Remedies #666”. The name derived from the prescription pad number on which he wrote a formula to treat a rural preacher with a severe case of malarial fever and chills. This formula was credited with saving the life of the much beloved fever sufferer and it came to be requested by reference to the “666” number off the prescription pad. "
Posted by S. Norman on 04/18/16 at 08:46 AM

I've never seen that product. The Monticello Drug Co. is based in Florida so is probably known better in eastern U.S. than out on the Left Coast where I grew up.

I suspect 666 would not help me at all for ache relief. The pain reliever is acetaminophen, which is the ingredient in Tylenol, and I learned many years ago that acetaminophen has no effect on me.
Posted by KDP on 04/18/16 at 09:42 AM
I've been running all over Florida on vacations for about 60 years and I've never seen the stuff anywhere.

Any good Christian wouldn't even stock it on his/her store shelf anyhow.
Posted by Expat47 in Athens, Greece on 04/18/16 at 10:20 AM
Back in the late 80s when I managed the front end of a CT Rite Aid, I remember when they took all that off the shelves in every store, because of Complaining Stupid People.

Anyone who's worked retail knows multiple times when a customer is told "You're total is $6.66" and they freaked out and and either added something to their bill or took something off.
Posted by Bill the Splut on 04/19/16 at 10:30 PM
Recommended by atheist's the world over.
Posted by GFinKS on 04/21/16 at 12:43 PM
Definitely an F state product, manufactured in Jacksonville. Advertising mascot pre-WWII was a child named Carol, which contributed to the eventual unpopularity of the name outside Satanic sympathizer families.
Posted by Angie unduplicated on 04/30/16 at 02:49 PM
Commenting is not available in this channel entry.