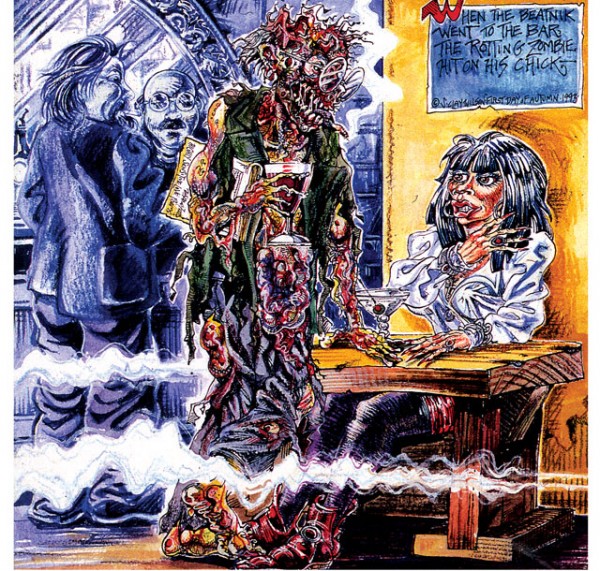 
Comments
I was introduced to Wilson through Zap Comix. He pushed the boundaries to the extent that he was one of the few artists who could find no liberals to support his art in court. Robert Crumb said Wilson's work made Crumb's look insipid. As Paul's link shows -- wouldn't you know it -- he illustrated books of children's literature. You might want to review the books before passing them to kids you know.
Posted by Harvey on 07/17/14 at 06:50 PM
Comics are not what they used to be. They are killing off Archie now by having him take a bullet for a gay congressman who is anti-gun rights.

That's some strange stuff. As far as Archie goes, why does everything have to be a political message now?
Posted by Patty in Ohio, USA on 07/17/14 at 07:48 PM
Archie was political before -- just a different politics than in his exit. A key Archie creator, John Goldwater, was a political conservative who helped bring in self-censorship in comics via the Comics Code. He also licenced Archie for evangelical Christian messages. The political change in Archie, if any, came after his death.
Posted by Harvey on 07/17/14 at 11:10 PM
Here's a thought, had Archie been packing he could have shot the other guy, saved his gay friend, and lived. Gun control only works on the law abiding leaving them defenseless against criminals.
Posted by Patty in Ohio, USA on 07/18/14 at 08:09 AM
Doesn't Chicago have gun laws? Works great huh? Just sayin'
Posted by Patty in Ohio, USA on 07/18/14 at 08:10 AM
If there is such an advantage for countries like the US with no gun control, why is the gun murder rate there a number of times higher than it is in places like Canada or Western Europe? The US has the highest per capita gun ownership in the world, and the highest gun murder rate in the western developed world (although a number of Latin American and Eastern European countries nose out the US with more impressive gun murder rates). Of all the places I have been, the least safe I have felt is in the US (although in most respects, it is a great place to visit). I don't think I would feel any safer packing heat.
Posted by Harvey on 07/19/14 at 01:51 AM
Commenting is not available in this channel entry.