If only you had invested in an Atmos Clock in 1982, the date of the B&W ad, you could have saved a bundle! 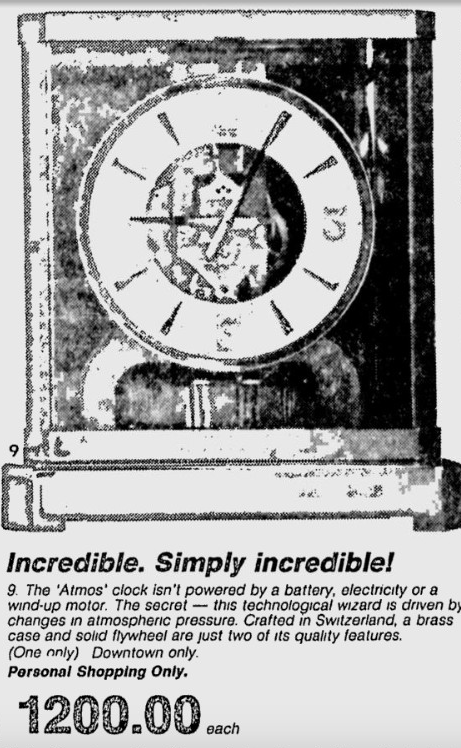 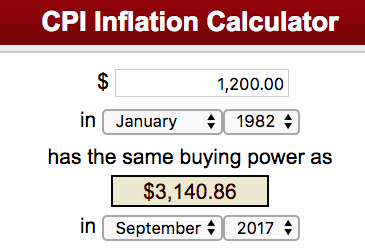 
Comments
Although the Wiki entry doesn't state the name of the winding mechanism, the description sounds much like a Stirling Engine, which uses the described principle of temperature difference to produce kinetic energy to perform work.
Posted by KDP on 11/09/17 at 07:59 AM
@KDP -- In a Stirling engine, one end has to be hot while the other end is cold. In an Atmos, it has to be warm one day, cool a day or two later, then warm, cool . . ..

Fill a glass with water, put it in a freezer, and place a little float on top which has a connecting rod to a flywheel. As the water freezes, the float rises and pushes the rod up, which pushes the flywheel through half a turn. When you off the freezer, the ice thaws, the float goes down, pulling the flywheel through the rest of the turn. The Atmos is the same principle, but instead of water changing from liquid to solid, it has a fluid which transitions from liquid to gas. Instead of pushing up a float, it makes the capsule it's in expand or contract.

Is that as clear as mud?


I'd like to see one in action. It must be a work of art to use so little energy input to produce results.
Posted by KDP on 11/10/17 at 04:47 PM
I think it's simply insane. If someone had told me about the concept without my knowing they're actually made and used, I probably would have said it's theoretically possible, but it'd be virtually impossible to produce parts with the necessary precision (and I used to machine things within a +/- 0.0001 inch tolerance).

I once read that someone calculated a Happy Drinking Bird produces a millionth of a watt. This has to be at least a couple orders of magnitude less.

What I really can't get my head around is how power is extracted when you don't know how long the stroke is going to be (a small temperature change produces a short stroke, a large temperature change produces a long stroke). Either you'd have to design it for a minimum stroke, which means it can't capture the energy from large temperature changes, or it has to use a very inefficient ratchet and pawl system. Either way, you're using only a fraction of the power available, which is an incredibly tiny amount to begin with.
Posted by Phideaux on 11/10/17 at 11:45 PM
Commenting is not available in this channel entry.