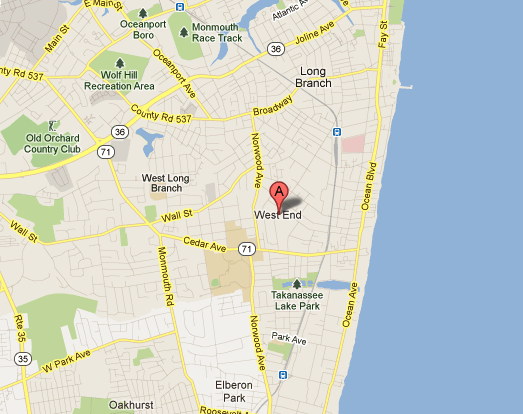 
Comments
West end of the Atlantic Ocean, obviously.
Posted by Cecil Rose on 02/28/13 at 12:23 PM
It has been my observation that most place names in America are taken from location in relation to something, native place names, and what ever popped into the heads of the first people to settle the area (California, Pennsylvania has amused me for years).

As for West End, NJ, I'm sure it was the west end of something at one time. Sort of like the West End of London which is no longer the actual west end of the city. The name remains, but the meaning has been lost.
Posted by KDP on 02/28/13 at 12:32 PM

It is about 85 miles north of 'North End' (Ocean City NJ). ?)
Posted by tadchem on 02/28/13 at 01:42 PM
Or the guy who thought up the name was a perverse sort and figured 'Let them figure that out!'
Posted by Patty in Ohio, USA on 02/28/13 at 08:13 PM
Well, I grew up in West Saint Paul, Minnesota, which is, naturally, precisely due south of Saint Paul. It borders Saint Paul's "West Side" neighborhood, from whence the suburb gets its name, and this refers not to being west of Saint Paul but being on the west bank of the Mississippi. (Most of St Paul is on the east bank. Which, thanks to a large bend in the river, is flowing mostly west and a little bit south at this point, so the east bank is north of the west bank.) The only city which borders St Paul to the west is Minneapolis.

Sometimes the directions don't mean what it seems they mean.

(Twin Cities bonus: there is also a North Saint Paul. It's north-east of Saint Paul, and unlike the others, doesn't actually border it.)
Posted by Calli Arcale on 03/06/13 at 01:07 PM