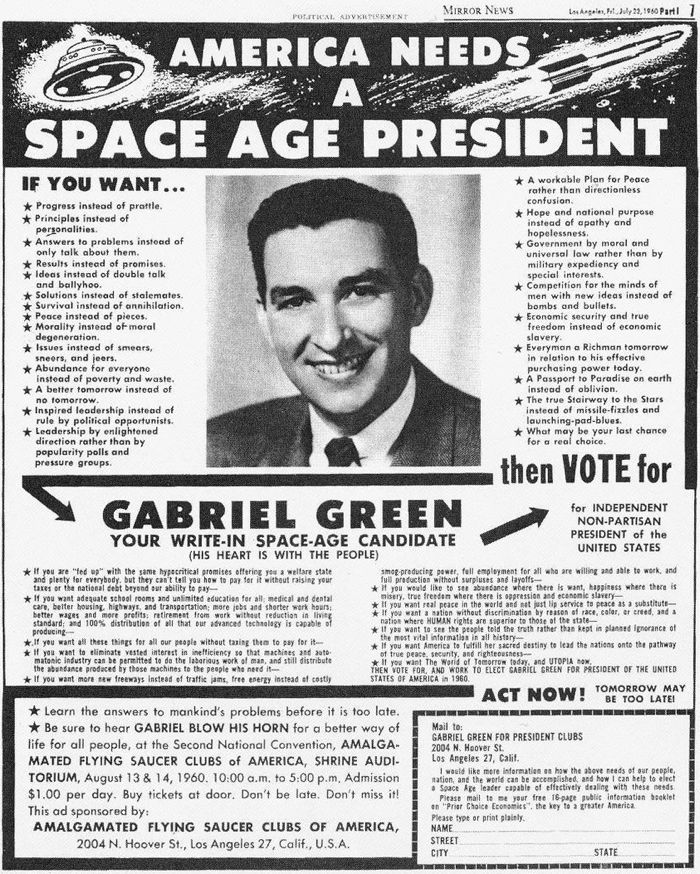 
Comments
Not surprising how many of Mr. Green's proposals are still espoused by politicians, even though some sixty years have passed.
Posted by KDP on 11/08/16 at 09:47 AM
Proposals--Sure
Qualifications--Not so much
Posted by crc on 11/08/16 at 10:28 AM

Can't be worse than Trump. At least you can't build a wall between the USA and space.
Posted by Richard Bos on 11/09/16 at 09:09 AM
@Richard Bos - Uh, did you happen to vote for Hillary?
Posted by GFinKS on 11/14/16 at 09:15 AM
Had I lived in the USA, I'd have held my nose and voted for Hillary. Say what you will about her, she's not a complete lunatic. Choosing Trump over her is like deliberately infecting yourself with rabies in order to avoid breaking your leg in four places: the latter choice is horrible and potentially long-term destructive, but the alternative now taken is catastrophically worse and only a deliberately self-blind fool would take it. But hey, you destroy your own country the way you want to.
Posted by Richard Bos on 11/14/16 at 09:48 AM
So essentially, you are a name caller just like the rest. You have followed the hype to the letter. Best of luck to you.
Posted by GFinKS on 11/14/16 at 09:54 AM
Commenting is not available in this channel entry.