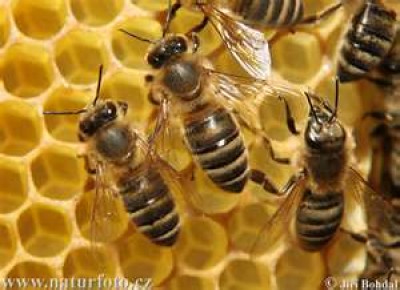 Imagine having the ceilings in your house start cracking and honey starts dripping down. Well it happened to an Ontario family. The house is infested with 2 colonies of honey bees totaling approximately 180,000, a colony of Yellow Jackets and some 2,000 pounds of honey. Oh, and the home owners insurance says they family is on their own, its not covered.

we had yellow jackets by the thousands! My side of the bed was by the wall and on summer evening I heard this crinkling sound like the rustling of wrapping paper. I put my ear to the wall below the window and heard a deep hum like an electric motor. Never having an infestation of this sort it took a couple of days to figure it out. It wasn't until I was working on the ceiling to the farmer's porch that I saw the steady stream of yellow jackets going into the bedroom wall.
I'm normally a do-it-yourself kind of guy, but this time I hired a (professional seems a stretch) guy. His estimate was 60,000 in three locations. He used some powdered poison they track in. He said that had I tried to use some Raid or similar product I would have fouled the hole. That would have resulted in the buggers finding another entrance which easily could have been from inside the house!
Best money ever spent.
Posted by Billy on 07/30/12 at 06:03 AM
I had bees build a hive in the wall of a bedroom in my house, where my stepson used to sleep. He mentioned a few times he heard a buzzing at night, but we didn't take him seriously until we saw the bees going in and out of a hole in the wall outside. This was back in 2004. At the time, I posted a picture of it over at Museum of Hoaxes:

After a pro killed the bees, I took down the drywall in that room to remove the hive and scrub away any trace of honey. Apparently they can smell the honey and will try to get back in if any is left.
Posted by Alex on 07/30/12 at 09:33 AM
I've found, Alex, that most males will try to get in if the honey smells good. (REF: Perfume Industry) 😜
Posted by Expat47 in Athens, Greece on 07/30/12 at 09:53 AM
With that many bees you'd pretty much have to hire a pro. If they swarm you upon being disturbed the repeated stings could be deadly, scary. Billy, its a good idea never to foul the hole. :lol:
Posted by Patty in Ohio, USA on 07/30/12 at 10:44 AM
When I was living in Fiji I got a gig as a house-sitter but it turned out that the house had been taken over by at least three massive colonies of bees. When I finally found someone who would do the removal I was a little shocked when they explained that they didn't intend to use their bee suit since it was so hot and stuffy inside it. In the end we had to tear open two walls and a floor and removed so much honey and hive it visibly weighed down the back of the pickup truck used to haul it all away. In wild hives the honey has larva all mixed in so it's not easy to just harvest the honey like you can if you use those bee boxes. Seemed a shame to waste it all though.
Posted by Miles on 07/31/12 at 09:58 AM
Commenting is not available in this channel entry.