He used to be Gavin Paslow, security guard. Now, thanks to thousands of dollars worth of body modification, he's become Diablo Denefer, Devil Man. But he says he's actually not satanic at all, "it's just a piece of fun." He's hoping to get a real, organic tail to complete his look. [catholic.org] 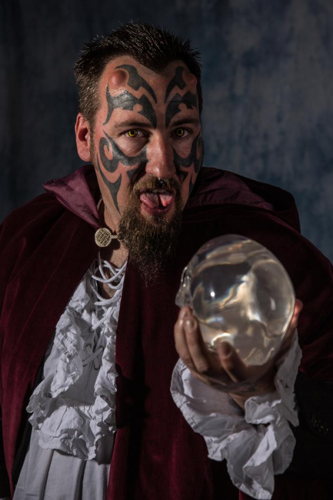 
Comments
He's going to have a devil of a time getting his poopies (someone else actually used that yesterday on this forum?) straight again. 😜
Posted by Expat47 in Athens, Greece on 02/13/14 at 09:50 AM
This is on catholic.org?!?
Posted by crc on 02/13/14 at 10:24 AM
I like how everyone seems to know what Lucifer looks like. According to the Christian Bible, angels exist as beings of light, without form. Since Lucifer is one of those angels before being banished from Heaven for his rebellion, it goes to reason that he still appears in his original form.

Used to be a security guard, huh? I wonder what he does for a living now. Who knows, maybe the personal appearance circuit pays good money. Since it's on catholic.org, maybe the Vatican employs him to show up at random confession booths and leer.

I wonder what his speech sounds like, with that forked tongue.
Posted by TheCannyScot in Atlanta, GA on 02/13/14 at 11:05 AM

Sssssilly Ssssssscottsman hissss sssspeachss ssssshouldn't be affected mucshhh. :lol:
Posted by Expat47 in Athens, Greece on 02/13/14 at 11:15 AM
How about Dance instructor? Yeah, That's it. The Ad copy just about writes itself! Dance with THE DEVIL! Of course the above mentioned speech impediment might get in the way! :lol: :coolsmile:
Posted by Tyrusguy on 02/13/14 at 12:07 PM
It amazes me, the way some people deface themselves. Why in the world they do it I cannot fathom.
Posted by Patty in Ohio, USA on 02/13/14 at 08:48 PM
This is too easy but it's BC here so...

The Devil made him do it!", Geraldine.
Posted by Expat47 in Athens, Greece on 02/13/14 at 11:06 PM
KDP: there isn't even anything in the Bible about Lucifer. Satan, yes, but he isn't anything like the standard picture. Most of that is later additions, from people like Dante and Milton.
As for the guy above, he looks more Maori than Moloch to me.
Posted by Richard Bos on 02/15/14 at 07:51 AM
Commenting is not available in this channel entry.