Wanda Hooper claimed that various electrical appliances around her home (her microwave, curling iron, TV set) were picking up and broadcasting obscene CB radio chatter. Is this really possible? I have no idea. Any radio experts care to weigh in with an opinion? 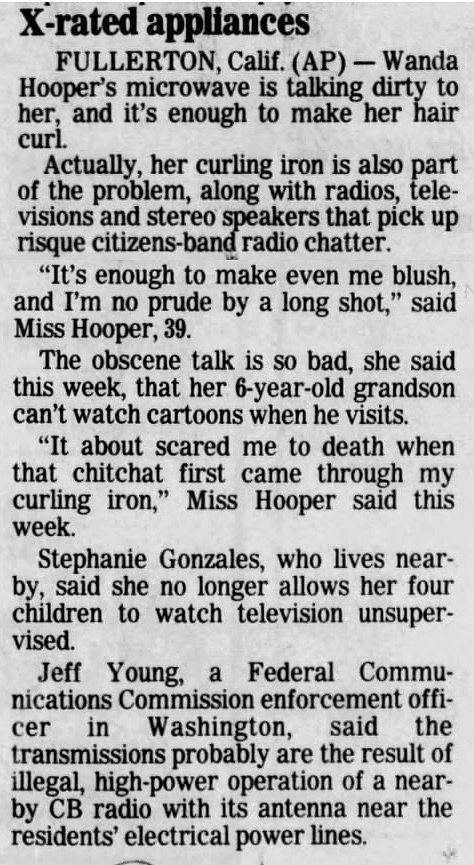 
Comments
I once lived near a police station and my computer picked up their radio transmitter. It was not clear enough to understand. I turned the computer 90 degrees and solved the problem.
Posted by BMN on 11/10/17 at 09:17 AM
Our low-watt college radio station broadcast on 88.1, bottom of the FM band. Audio for broadcast TV channel 6 is just below that. Old pharts may remember we used to have fine-tuning dials on the TV. If your TV was a bit out of tune, you might pick up our station as the TV ch6 audio.

So my station manager warned me. And, sure enough, one night, I got a call from a local resident complaining about getting our station over the TV and complaining about what I was playing. (I think I was running a theme of rock drug songs and related; this was 1971, not that outrageous.)

I explained about adjusting the tuning on her TV, and she said, she didn't care about the fact we were bleeding over into her Gunsmoke viewing. She just wanted to object to the content!

Okay, that wasn't too related to singing coffee pots, but when the heck else will I ever get a hook to tell my ancient tale? 😊
Posted by mindful webworker on 11/10/17 at 10:17 AM


Here is a bit of trivia as to why you may get music from your toaster:
https://www.theglobeandmail.com/opinion/brace-yourself-for-some-news-on-the-radio/article6122691/?arc404=true
Posted by BMN on 11/10/17 at 10:39 AM
Yep, it's possible. Radio is simply electromagnetic radiation. It can be received with as little equipment as a razor blade and coil of wire. Stories of picking up radio in one's dental work can be true, why not a refrigerator, tv or microwave.
Posted by Rick on 11/10/17 at 12:32 PM
Yes, this was a problem during those bygone days (my time was the late 1970's) of the Citizens Band radio. They were supposed to be limited to a few watts of output power but you know there are those guys who just have to have more than allowed. The guy in the duplex next door to us had a full antenna in the backyard and he would regularly be heard interfering on the stereo in our house. I didn't notice any other appliances exhibiting the same effects at the time.
Posted by KDP on 11/10/17 at 12:53 PM
Commenting is not available in this channel entry.