Researchers in Poland have discovered a group of ants living a strangely dystopian existence.

It's a group of worker ants that have fallen down a vertical ventilation pipe into an old nuclear weapon bunker and are unable to get out. As described by the researchers, it's "a large amount of workers trapped within a hostile environment in total darkness, with constantly low temperatures and no ample supply of food."

When the researchers first discovered the ant population down in the bunker in 2013, they assumed the ants would soon die. But when they returned to check on the ants in 2015 and 2016 the ants were still there — somehow maintaining a stable population. How were they doing this? This Science Daily article explains:


the severe conditions within the bunker made reproduction effectively impossible. Although the scientists did undertake a special search for larvae, pupae, empty cocoons or queens, they found nothing. Nor did they find signs of male offspring.

Looking for an answer why the population was still seemingly thriving, the scientists deducted that there was a constant influx of newly fallen ants. The metal plate that once covered the pipe outlet had obviously rusted so much that it has been collapsing under a big wood ant colony's mound built right over the pipe. In fact, the mortality in the bunker is quite high, but the regular 'newcomers' turn out to be overcompensating for the dead ants.
It's like an ant version of Hell. They struggle along in complete darkness, freezing, slowly starving to death, with new captives constantly replenishing their ranks.

The researchers' full article is in The Journal of Hymenoptera Research: "Living beyond the limits of survival: wood ants trapped in a gigantic pitfall" (Aug 29, 2016). 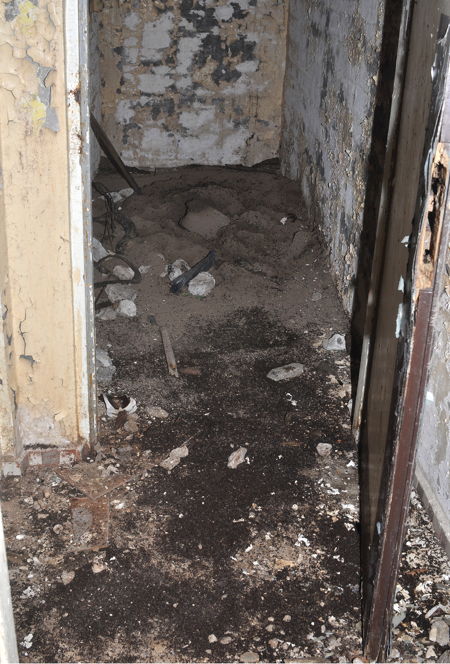 "View from the bunker corridor over the space with the F. polyctena ‘colony’;
in the foreground, a vast ant ‘cemetery’."

Forget about the ants. This reminds me of my office - we are kept in the dark, have a cold office and no amply food supply - so how do we maintain a stable population? Hire contractors to replace the staff!
Posted by Jeff on 09/20/16 at 09:04 AM
Commenting is not available in this channel entry.