Years ago cars had lighters in them, now you can have one in your phone. It's called the SB6309 Lighter Phone. It uses the cell phone's battery to light your cigarettes. I don't smoke but if you do, you can buy one here: 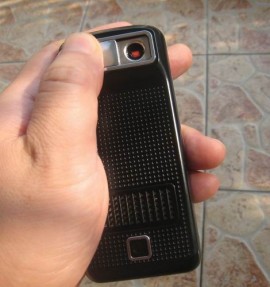 
Comments
this is just a dumb gadget. that phone is larger than the average too. don't get me wrong phantomspy, it fits perfectly in your series. it's just a dumb idea.
Posted by Patty in Ohio, USA on 07/20/09 at 06:19 PM
It's only a dumb idea until you're having a nicotine fit and can't find a lighter because prohibition has struck again.
Posted by Expat47 in Athens, Greece on 07/21/09 at 12:39 AM
yeah i guess so expat. i wouldn't know about nicotine fits as i don't smoke. 😊
Posted by Patty in Ohio, USA on 07/21/09 at 12:47 AM
I started with I was 13 and smokes were a couple a bucks a carton. Just over a year ago I used Chantix and "kicked the habit".

The hypocrisy of the western governments still burns me with all their "stop smoking" bullsh1t while raising taxes to make-up for the loss in revenue from fewer smokers! Subsidizing tobacco farmers, making false claims about health issues, micromanaging businesses, and all the other crap they feed their "constituents". Rhode Island charges $2.37 PER PACK and Pennsylvania just sent a $4,500 bill to some octogenarian for "sales tax" on smokes she bought on line! Yup! Smoking is going to kill you if you don't die of sticker shock first!


first congrats on kicking the habit! that's not an easy thing to do. also i'm with ya on the rant sweetie. i have family that smoke, and though i wish they'd quit i think smokers are treated unfairly. if taxes are gonna be that high for 'health' concerns then the gov should be required to put the money aside for smokers health issues. in an intrest bearing account it would go a long way in supporting smokers who are sick from smoking. then they are paying for their own care and the taxes would make some sense. sin taxes are ridiculous. we are taxing you so you will stop unhealthy behavior. but crying the blues when people do stop said behavior. hypocrisy is the perfect word expat!
Posted by Patty in Ohio, USA on 07/21/09 at 07:42 AM
:red: As a smoker I say "cough, hack". As a reader I say just what we need. Now as I am talking on the cell phone while driving, I can light up and use both of my hands for something other than the mundane driving task.
Posted by Mini Viking on 07/21/09 at 11:54 AM
I guess, despite my tendency to lurk, I have to get in on this thing too. The biggest problem I've seen with the smoking issue is one of definitions. Most people are too 'politically correct' to define smoking as what it literally is. Smoking is poisoning yourself and others (tobacco smoke is literally a toxin) for your own pleasure. My personal belief is that smoking should be about as legal as putting cyanide in someone's coffee. And, just as a side note, I haven't ever met a smoker who wasn't a depressive, although I've met (and am) a depressive who doesn't smoke. Things like this worry me because they give people more reason to poison me for their own existence forsaken pleasures.
Posted by Alassirana on 07/21/09 at 01:57 PM
health issues exist for many behaviors. drinking affects others through drunk driving and we regulate that but don't make drinking illegal. the path we are headed down ends with a scale at resturants to determine if you can be served, people with tans being turned away from public beaches, and ultimately genetic testing tied to enforced abortions. or genetic testing and sterilization if someone has the possibility to pass on genetic problems. think i'm exaggerating? we have gone from assisted suicide being illegal to at least one state medicaid refusing to cover chemotherapy drugs but covering the drugs used for assisted suicide at 100%. my friend who is a registered nurse read that in a trade journal. all i'm saying is when we start regulating behavior eventually the pendulum will swing too far. it always does.
Posted by Patty in Ohio, USA on 07/21/09 at 02:46 PM
Commenting is not available in this channel entry.