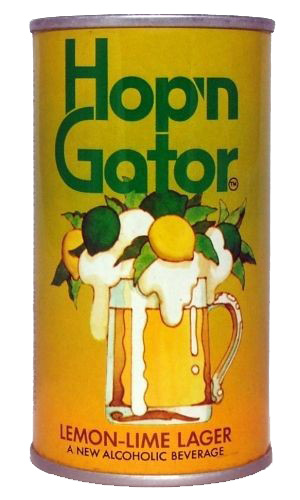 In 1969, the Pittsburgh Brewing Company introduced Hop'n Gator Lemon-Lime Lager, which was a combination of beer and Gatorade, but with 25% more alcohol than regular beer. The concoction was created by Robert Cade, the inventor of Gatorade.

A comment on BeerAdvocate.com provides some insight about what might have been going through the minds of the management team at the brewery when they decided to come out with this product:


There was an urban legend around that time that mixing alcohol with Gatorade "gets you drunk quicker", so that may have been part of the thinking behind the product. There was a move by a few others brewers at the time to create what today would be called Flavored Malt Beverages - besides Pittsburgh's Hop'n Gator there was also National's Malt Duck and Lone Star's Lime Lager. Those products were marketed in hopes to stem the loss of some of the youth market which brewers felt had gone to the then-popular sweet, "pop" wines like Ripple, Boone's Farm and Bali Hai. Part of that popularity might have been influenced by the general opinion of dope smokers that cheap sweet wine "paired" better with marijuana than beer.
However, Hop'n Gator quickly ran into problems. First, the brewery was sued in 1970 by the makers of Gatorade for infringing on the Gatorade trademark. This suit apparently was settled. But the larger problem was that Hop'n Gator, pitched to the public as a "lemon-lime lager," just didn't sell very well.

So the brewery dropped the "lemon-lime lager" description and re-introduced Hop'n Gator as a "tropical-flavored malt liquor." This proved more appealing, especially among blacks in Georgia, South Carolina, and Detroit. So much so that the beverage attracted the attention of the NAACP. As reported in the Charleston Post and Courier: 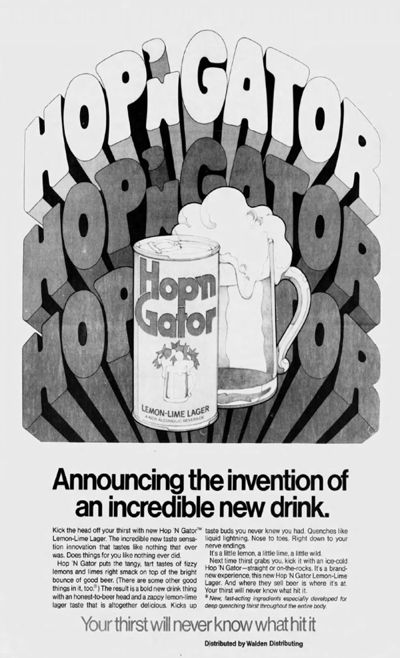 And one more bit of Gatorade-related trivia. In a 2001 interview with Sports Illustrated, Robert Cade revealed that when the University of Florida Gators were first testing Gatorade, some of the players had complained that it tasted like urine. So Cade and an assistant tested the hypothesis and concluded that, in fact, "There's a significant difference in flavor."


Comments
I see great potential to reintroduce the beer. Currently a number of fruit flavored beer's out there and perhaps this could become the official Florida State beer. Of course include a picture of a alligator and perhaps a mostly naked lady on the container. Or call it Gator Breath Beer, brewed with pure Everglades water. It could be sold at the sort of famous, "Robert is Here" fruit stand on the way to Everglades National Park.
Posted by Gator Guy on 08/18/16 at 07:17 PM
Our beer of choice as a kid was Schlitz in the Tall Boy can at 24 ounces. Who had time to waste carrying around wimpy 16 ounce cans? Two Tall Boys would take you through the evening, no problem.
Posted by KDP on 08/19/16 at 08:38 AM
New drink? Well, at that strenght, maybe, but basically it's a shandy. And from the sound of it a more than averagely horrible one, at that. They've been known for well over a century, though usually with the intent to make the drink less, not more, alcoholic.
Posted by Richard Bos on 08/20/16 at 04:04 AM
Commenting is not available in this channel entry.