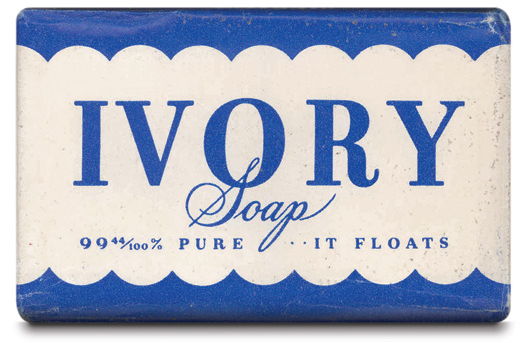 For over 100 years, Procter & Gamble has marketed Ivory Soap with the slogan, "It floats."

According to legend, the discovery of how to make the soap float (and that consumers would find this desirable) was an accident. Supposedly a workman left the soap mixing machine on for an extra half hour, thereby mixing more air into a batch, making the resulting bars buoyant. But in 2004 evidence was unearthed indicating that the discovery wasn't actually accidental.

However, over the years there have been a few cases reported of rogue bars of Ivory Soap that refused to float.

The most well-publicized case occurred in 1944, when a Mrs. William Porter of Springfield, Massachusetts bought a bar of Ivory that sank and sent it back to Procter & Gamble, complaining that it was defective. The soap scientists there studied it and eventually issued this statement: "Floating soap floats because it has been whipped about like a cake batter. In storage, this particular bar might have been compressed and its tiny air pockets crushed." 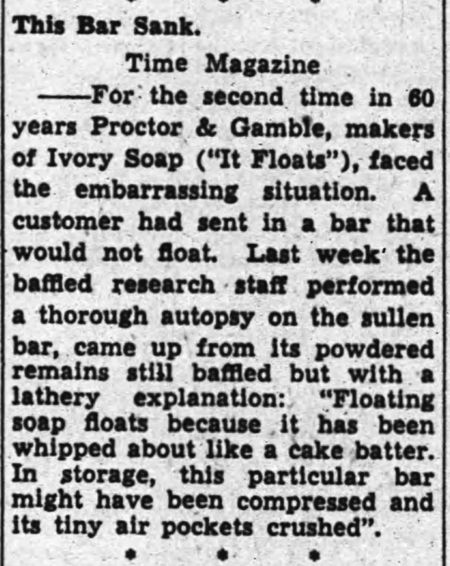 But that wasn't the only case. According to a June 20, 1954 article in the Cincinnati Enquirer there were, by that year, seven known cases of Ivory Soap sinkers:


The first recorded sinking of the famous floating soap was at Bean Point, N.Y. in 1943. News of the event failed to leak out, however, and it was not until September, 1944 when someone in Springfield, Mass., bought another sinking bar, that the mishap reached the press. It made news from coast to coast.

The company revealed that since that time five other cakes of Ivory have, for mysterious and unaccountable reasons, gone to the bottom and stayed there. Scientists at the Procter & Gamble research laboratories explain that Ivory Soap floats because of the presence of tiny air bubbles, whipped into the soap when the mixture is molten — and in the case of the renegade bars, the tiny air bubbles are somehow missing.

"In the 75 years since Ivory Soap appeared, literally billions of bars have successfully floated," said a company spokesman. "Nevertheless, it appears that freaks of manufacturing will sometimes occur."
After 1954, I can't find any reported cases of sinking soap. Perhaps the manufacturing process improved. Or perhaps sinking soap was no longer deemed newsworthy.

Relevant to this topic — the idea of sinking Ivory Soap inspired one of the most famous New Yorker cartoons of all time. Penned in 1928 by Gluyas Williams, it was captioned, "Industrial Crisis: The day a cake of soap sank at Procter & Gamble's." 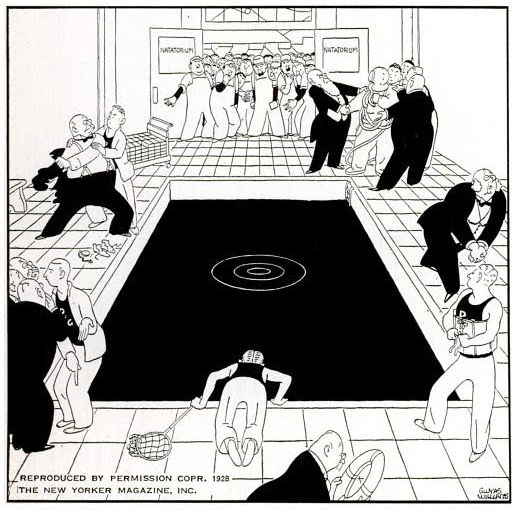 Also, in 1990 (and again in 2001), P&G created 1101 special bars of Ivory Soap that were designed not to float. Consumers who were lucky enough to get one of these sinking bars could claim some kind of prize. Reportedly, it wasn't as easy as P&G had assumed to create the non-floaters. From the Houston Chronicle (Jan 25, 1990):


Three-and-a-half months before the campaign was due to kick off, Palfenier [brand manager for Ivory] sent down orders to manufacturing for some sinkable Ivory. No problem, he thought, remembering the legend. Just cut out that extra 30 minutes of mixing.

Sorry. Apparently the new machinery over the years had changed that simple formula. The bars still floated.

They tried other amounts of time. No go. Unlike the Bismarck, the Ivory refused to sink. Finally, they mixed and molded the soap by hand. That worked. Diving cakes occurred.


Comments
That would be my long-lost Aunt from Springfield MA. My father, Jim Porter, traced our lineage back through Southampton MA and I have to believe Mrs. William Porter is a relative of mine.
Posted by Greg on 12/26/16 at 10:28 AM
Ivory also didn't taste so bad when your mother washed the bad words from your mouth.
Posted by KDP on 12/26/16 at 03:13 PM
Floating is certainly no longer synonymous with purity. The Great Pacific garbage patch comes to mind.
Posted by Fritz G on 12/27/16 at 07:08 AM
Commenting is not available in this channel entry.