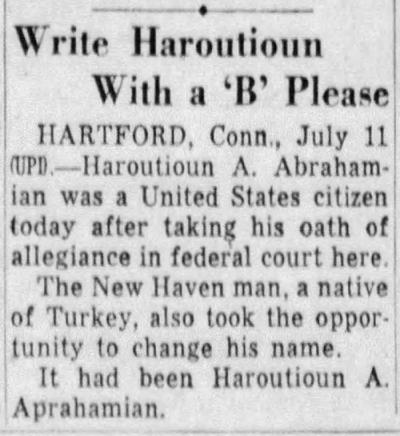 
Comments
You are leaving us dangling, Alex! What is the correct pronunciation!?! I can't believe I never wondered before now. All these years I have been saying in my head "bo-eese" to rhyme with "No Meese." But could it be "bo-essay?" "Bo-say?" "Throckmorton?"
Posted by Paul on 04/27/16 at 10:29 AM
99% this guy was/is an Armenian and Abrahamian would make perfect sense.
Posted by Expat47 in Athens, Greece on 04/27/16 at 11:22 AM
My family name is of Eastern European origin (it has one vowel and fifteen consonants) and apparently was spelled with a leading "B" but changed to a leading "P" probably at an immigration point where my ancestor repeated his name to a hard of hearing official. Unfortunately it is still unpronounceable to American English speakers. I have friends who have known me for more than forty years who still cannot get it right.

I suppose it is better than stories where the immigrant tells the official his name and the official tells him, "Your American name is now 'Smith.'"
Posted by KDP on 04/27/16 at 11:39 AM

If Alex' name is pronounced using vowels the same way as the nordic countries use, it would be more of Byerseh, with the er sound very truncated and underspoken. The O with the umlaut usually sounds like an undervoiced yer sound. At least that's what I've learned from someone who speaks Finnish natively, and it seems to work the same with others who speak similarly spelled languages. I've taken a bit of time trying to learn Finnish (Suomi), so have learned a lot about vowel sounds that do not occur in English.
Posted by Alassirana on 04/27/16 at 12:04 PM
I dated a woman whose last name was Sweat - not terrible, but not a great name. She told me that her grandfather's last name had been Svietla, which is a much lovelier-sounding name. That was just rude of them.
Posted by Joe on 04/27/16 at 02:14 PM
oe is an alternate spelling for (o with an umlaut). It's the normal form in Swiss German, and it is used by all Germans when using a typewriter or the like that doesn't have umlauts.
Posted by eric white on 04/27/16 at 03:02 PM
One of my great aunts married into a family of immigrants from Alsace-Lorraine. Their name was Pascoe, pronounced "pasco." They eventually dropped the "e" as Americans insisted on pronouncing it.
Posted by Jim on 04/27/16 at 08:59 PM
Same deal with Mueller -- the German name that has an umlaut "u". But it's common enough that it may not hang up so many Americans. Viel Glück !
Posted by Virtual on 04/27/16 at 09:13 PM
Paul -- As far as I'm concerned, there is no correct pronunciation for my name. I enjoy hearing the weird and twisted pronunciations people come up with.

I grew up pronouncing it "Burr-zah". Then, about 15 yrs ago, I got tired of having to constantly explain how you get an "r" sound out of Boese. So I started telling people it was pronounced Bose, rhyming with Rose. And I've stuck with that ever since.

Over the years I've heard from quite a lot of people with the same name (there's apparently a lot of Boeses in the midwest), and their pronunciations of it are all over the map -- Bay-zeh, Boose, etc.
Posted by Alex on 04/28/16 at 03:18 PM

I always thought Bose as in, "Of the sound system Boses??" It really never occurred to me it might be different. 😊
Posted by Patty in Ohio, USA on 04/28/16 at 07:17 PM
Commenting is not available in this channel entry.