In 1917, Charles F. Pidgin received a patent for an invention to allow "visible speech" to be added to (silent) motion pictures by means of "inflatable balloons being shown for carrying the words and for enabling them to be blown from the mouth of the characters." 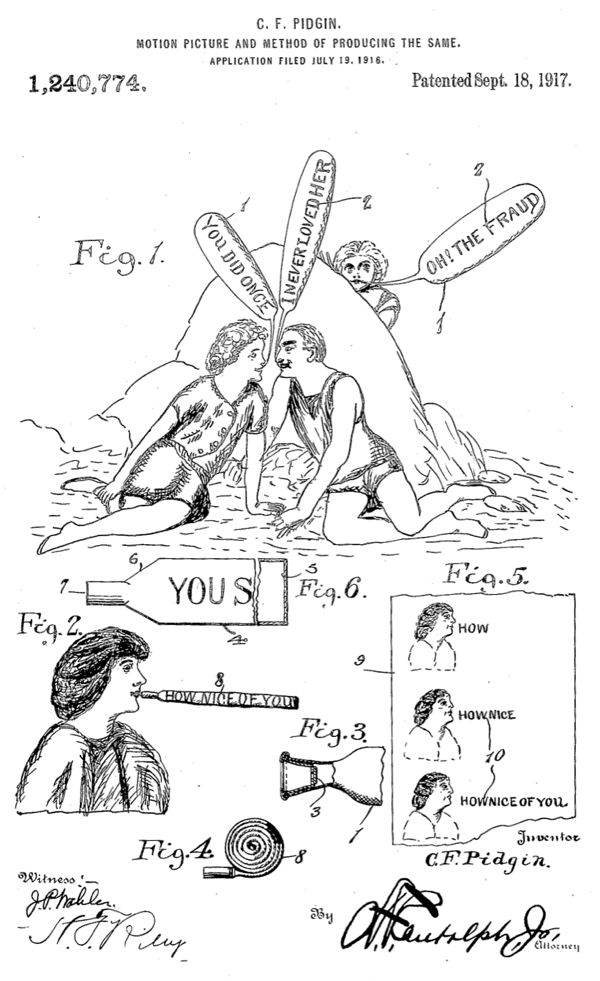 From his patent application:


In carrying out the present invention the dramatis personae speech is introduced or incorporated in a picture by means of an expansible inflatable device adapted to be blown up by the actors or characters of the picture...

Any form or shape of balloon may be employed for this purpose and a series of pictures or exposures may be taken during the inflation of the balloons, which may be successively or simultaneously inflated according to the requirements of the photo-play or other motion picture production. The blowing or inflation of the devices by the various characters of a photo-play will add to the realism of the picture by the words appearing to come from the mouth of the players.
I don't believe that Pidgin's visible speech system was ever used in a film. After all, critics ridiculed it even in 1917. From the New Castle Herald (Dec 1, 1917):


Imagine Francis X. Bushwah expanding his handsome cheeks and blowing — "I love you, will you be mine?" at Beverly Payne, while the latter, with a similar explosion of wind power, puffs back — "Darling, I am yours!" Or Theda Bara Backa breathing forth sausage-like declarations of vampirish passion at her victims!
According to his obituary, Pidgin (1844-1923) was also a merchant, statistical expert, inventor of tabulating machines, and a noted historical novelist. More info: wikipedia. 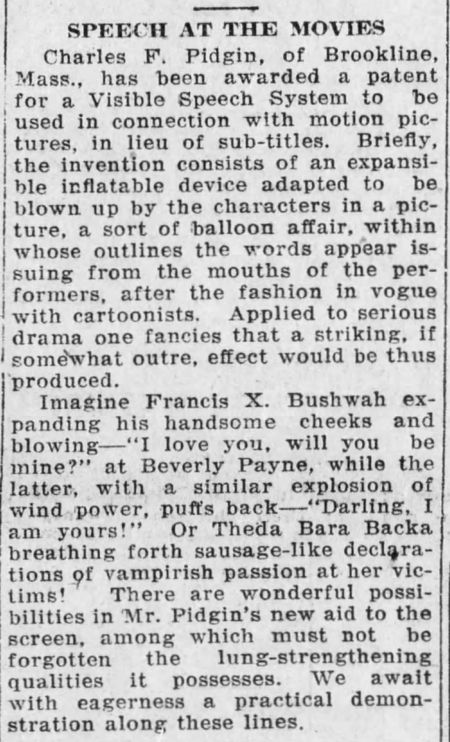 
Comments
Anyone knows now that this only works out when the boys are confronted with the Blue Meanies.
Posted by Virtual on 11/19/16 at 01:57 PM
Pidgin English?
Posted by PupTentacle on 11/19/16 at 03:41 PM
There's some kind of joke that escapes me around the names Francis X. Bushwah (should be Bushman), Beverly Payne (should be Bayne), and Theda Bara Backa (should just be Theda Bara).
Posted by ges on 11/19/16 at 05:45 PM
Commenting is not available in this channel entry.