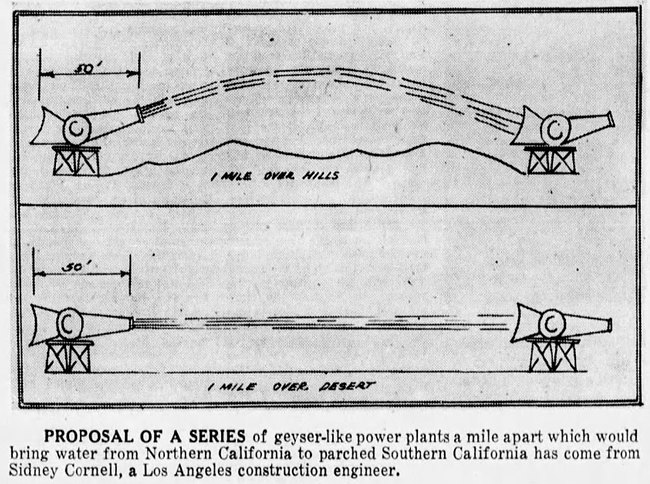 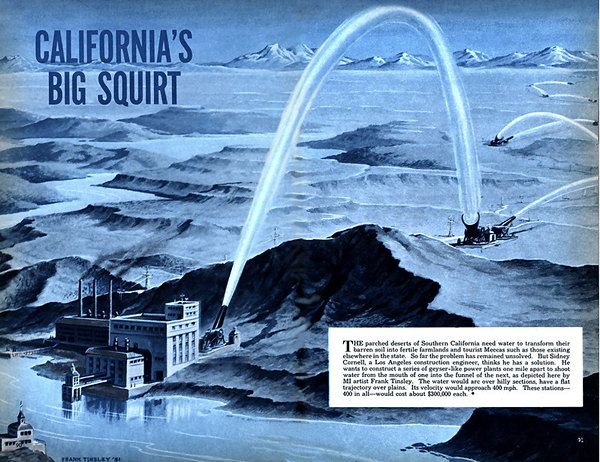 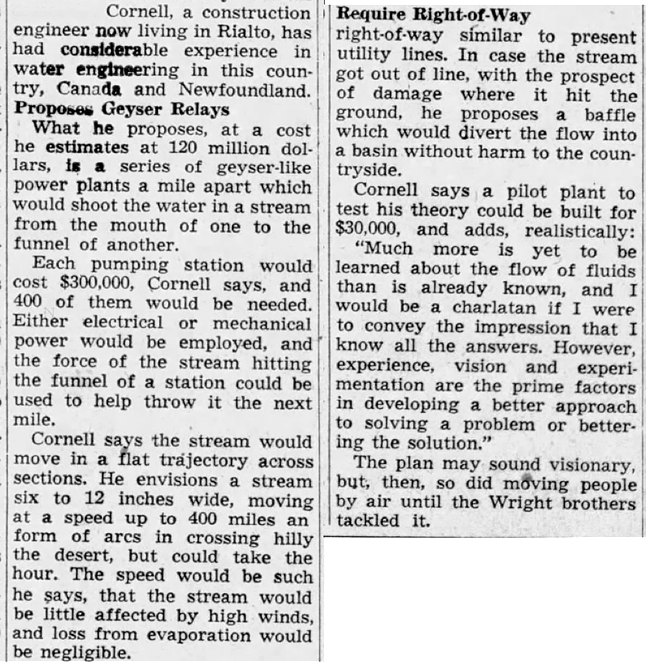 Comments
I can't recall where to look it up, but I believe I heard of someone - possibly Cornell at a different time - proposing basically the same system, but powered by a series of nuclear explosions. Just in case it wasn't frightening enough to have your network of long-range ballistic water guns powered by conventional means.
Posted by Ross on 01/24/23 at 06:23 AM
Just what was needed - a Las Vegas spectacular running across the state.
Posted by KDP on 01/24/23 at 12:15 PM
This idea is all wet.

I wonder how hard that water would be when it reached the destination. It'd absorb heat from the pumps and sunlight, and even if not much evaporated when it was in the stream, it'd be a major splash event when it reached the next cannon, releasing clouds of vapor. Even hitting the bin would create more heat and more evaporation. Repeat 400 times, with the concentration of calcium/lime increasing at each step.

One of my conundrums: someone proposed, for oil, instead of a pipeline, a tunnel in which there are tank cars moving in a continuous loop, filled and emptied while moving. Besides limiting the amount which might spill in an accident, it would move the oil faster because of a trick: there'd be pumps between the cars to move the oil from car to car. This would mean oil speed would be car speed + pumping speed.

I know this would be true, but my backbrain rebels at the idea, refuses to accept it, assigns it to the realms of witchcraft.

I guess we would need witchcraft to stuff into cars the amount of oil one can put into a pipeline while making the whole shebang cost less than the price of a pipeline.
Posted by Yudith on 01/28/23 at 07:43 AM
Yudith -- Cost is irrelevant because it's so much better for the environment. A pipeline would have to have at least sixteen layers in order to provide the same protection against leaks. Also, a pipeline at the end of its useful life is a nightmare of entrained pollutants. Upgrades/updates would be easier as rail technology advances. Also also, if no longer needed for oil transport, it could be repurposed for bulk cargo use. Today, oil; tomorrow, wheat.
Posted by Phideaux on 01/28/23 at 01:38 PM
I'm afraid not, Phideaux. You have those tricky jumpers between each car that have to be flexible, so they are even more susceptible to leaking.

Better to make the jumpers hard pipe. This also allows you have just one pump. Then eliminate the railcars and the tunnel, and you've really got something.


Posted by Virtual in Carnate on 01/29/23 at 11:08 AM
Virtual -- Any leaks would be within the tunnel, not into the environment. Easily detected and cleaned appropriately.

Not to defend the idea (it's not original to me), but hard pipe with rotating fittings have an excellent record.
Posted by Phideaux on 01/29/23 at 11:17 AM