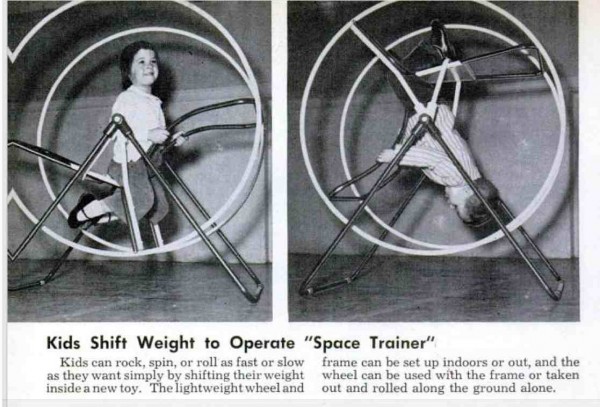 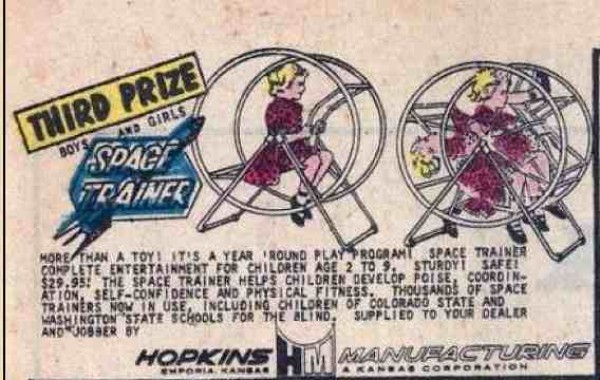 
Comments
Unlike the fair rides, with this version you are unlikely to decorate others during vomiting...so, progress!
Posted by crc on 05/28/14 at 09:51 AM
Either 'spin' or 'roll' is missing as this thing seems to have only one center line.

rock = rock back and forth on the frame
spin = spin all the way around, forward or backward on the frame
roll = take the wheel off the frame and watch your 2-year-old roll to his death!
Posted by Joe on 05/28/14 at 12:05 PM

I had one of these. A broken neck waiting to happen. I would spin merrily for hours and watch TV at the same time. Set up in the living room in front of the TV. At least one of our after school cartoon shows advertised these. They would have four or five kids spinning in these while some guy made a pitch to the clown/host of the show. Made out of steel, no plastic, nothing padded. The axle was exposed and could easily slice a finger. The wheel could easily be removed from the frame. We would do this and roll it down the back yard with someone (including me!) in it. Could easily fall over, hit a tree. You could get a leg or arm wrapped around the frame and break a bone. A dangerous toy but I loved it. Looks like they were made a mere 50 miles from where I live.
Posted by Mark Dillman on 08/07/14 at 11:02 AM
Had one as a kid...loved it....rode it until it disintegrated.

tsfr
Posted by ThisSpaceForRent on 04/30/15 at 07:11 PM
My grandmother had one of these!! Hours of fun with my cousin!We grew up playing on this. It was my Dad's when he was kid. I was able to find an article that said there was a company that made them in Denver , Colorado. That is where we live. I have searched for one for my kids and in the far futurd grandkids. But no luck....sure wish I could find one!
Posted by Brittany on 10/24/15 at 06:03 PM
Commenting is not available in this channel entry.