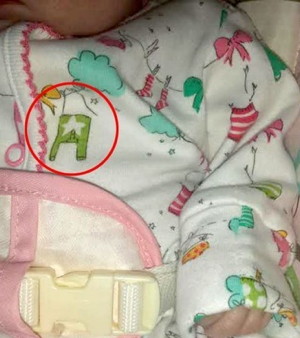 Several people who purchased (or were given) a baby jumper sold by the fashion chain Next have complained after they noticed it was "covered in penis drawings." The store admits that, yes, this does appear to be the case, but explains that the original design was "over simplified by the printer and has unintentionally become something else." [NorthDevonJournal.co.uk]

It is the the people that complained that have the dirty minds. :exclaim:

As another example of Prudes with dirtier minds than moi; the city near where I grew up had a law where it was illegal to hang both men's and women's underwear on a clothsline to dry at the same time. EGAD
It was about 1900 and gone soon after.
Posted by BMN on 07/18/14 at 05:24 PM

I am glad we raised our children with honesty and truthfulness on sex etc according to what they could understand at what age. At 14 and 16 our daughter and son can feel comfortable about the subject around us. We have had some problems though with other parents not liking our kids sharing that truth with their kids.
Posted by BrokeDad in Midwest US on 07/18/14 at 05:40 PM
I wouldn't blame dirty minds unless you can honestly tell me it looks like anything else.
Posted by Patty in Ohio, USA on 07/18/14 at 07:41 PM
I want to see what the "original design" really did look like. They claim an upside-down jumper. Well... maybe.
Posted by Richard Bos on 07/19/14 at 06:55 AM
@Richard Bos -- a three-button placket with a ruffle isn't uncommon on children's clothes (I've seen it a couple of times, and I'm neither particularly observant nor interested in such clothes).

At the level of detail (or lack thereof) of the printing, I doubt that having it in a contrasting color, radiating lines to indicate ruffle, and some dots for buttons would have made much difference.

There's this hilarious video on YouTube from a Brony (grown male My Little Pony fan) who went to a convention and wanted to get John De Lancie to autograph a piece of fan art he'd found that showed his character, Discord. And once it was printed out, he saw something in it that looked a bit suggestive, unintentionally, but it was too late to get different art so he decided to just go with it.

Of course, John De Lancie spotted the same thing almost immediately. But he wasn't offended. Oh no. He was not offended. Watch it; the story is hilarious. :-D

http://www.youtube.com/watch?v=HHbfr3TrNLg
Posted by Calli Arcale on 07/25/14 at 03:55 PM
Commenting is not available in this channel entry.