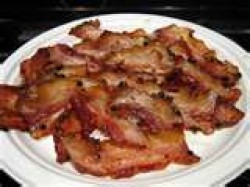 Bacon is delicious and wonderful, but you should not beat up your mom over it. Four months in jail for performing the beat down is not the only reason either.


I'm sure the poor soul needs counseling to help him recover from his, obviously, out of control addiction. He'll also need some monetary assistance and food stamps while out of work so he can meditate on the weekly 10min discussion he'll have with this gubment provided health worker and 15min with his gubment subsidized shrink. Then, of course, hell need to be provided transportation to and from both meetings (which are in the same building but not on the same day).
Posted by Expat47 in Athens, Greece on 09/12/12 at 01:29 AM

Expat, you have a deep understanding of how the government works. Now imagine, 20 years down the road, what government directed health care will be like. Just a thought.
Posted by Patty in Ohio, USA on 09/12/12 at 08:07 AM
I don't need to imagine, Patty. I've been living it for the past umpteen years.

After paying (heavily) into the system for decades, this month our scrip for pills was refused by the pharmacy because the gubment won't/can't/doesn't reimburse them. But still, the pharmacists/owners have to pay income tax on the moneys they should have been paid by said gubment. Yea, you heard it right, they're taxed on income, owed them by the gubment, that they've not been paid. And, that isn't even the tip of the iceberg.
Posted by Expat47 in Athens, Greece on 09/12/12 at 08:54 AM

Bad Karma Indeed!! 😡
Posted by Tyrusguy on 09/12/12 at 10:18 AM
Well, if he tries to monopolize the bacon in the Big House, he's going to be on the losing end of the smackdown.
Posted by TheCannyScot in Atlanta, GA on 09/12/12 at 11:24 AM
We'll be sure to have plenty of bacon on hand when you visit this month Patty. We wouldn't want you or the subby deprived and becoming violent :cheese:
Posted by BrokeDad in Midwest US on 09/12/12 at 04:09 PM
Since we're running out of new reasons to put people in jail in the U.S., I suppose bacon abuse will be coming up soon. Hey, why not? If it's "smoked bacon", it must be a bad thing, right? 😖
Posted by done on 09/12/12 at 09:47 PM
I tried smoking bacon once. Got it lit a couple of times but it kept going out.
Posted by Expat47 in Athens, Greece on 09/13/12 at 12:55 AM
Hey, Expat, you outta try coming back to the U.S., now. If you have any coverage at all, all generic prescriptions are free, now, as long as you get a 90-day supply thru mail-order. And that's just the start of Obamacare. Hey, pretty soon, all those states with legalized marijuana will figure out some way to get it covered by Rx, even tho it's still Federally illegal. We might all be smokin' free and clear pretty soon, lol! Taxpayers, uh, what taxpayers? :coolsmile:
Posted by done on 09/13/12 at 01:05 AM
Commenting is not available in this channel entry.