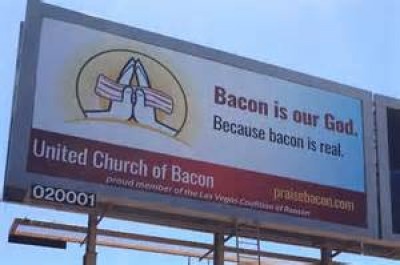 English Bacon, cut from the loin back of the pig. meaty with streaks of fat.

American Bacon, the cured belly of the swine, mostly fat, with streaks of lean.

Canadian Bacon, meat cut from the back of the boneless loin, mostly lean, little fat.

And one of the sites I frequent has commenters with very strong opinion about which is best. (Except for the Canadian bacon, even most Canadians seem to prefer either English of American.)

But I am eclectic, and believe on the breakfast of reckoning, the question will not be, "Where was your bacon cut from the hog?", but rather, "How good does it taste?"
Posted by Captain DaFt on 09/14/15 at 09:13 PM


When we were in Ireland I saw a billboard outside a butcher's shop claiming to have "Large Oysters of Bacon".

Yea, I went in and asked.
Posted by Expat47 in Athens, Greece on 09/15/15 at 12:51 AM
Maple Flavoured is an heresy, as it is as fake as silicon boobs. The believers would prefer maple smoked, i.e. smoked using real maple wood. As for the three kinds of bacon, they are like the Father, the Son and the Holy Ghost; they go together, they all have their own use, each one of them is good and a true believer shall like them all.
Posted by Yudith on 09/15/15 at 07:17 AM
I am Canadian and have never eaten "Canadian Bacon". I have eaten my share of "Back Bacon" however.
Posted by BMN on 09/15/15 at 07:57 PM
What is it Expat????
Posted by Patty in Ohio, USA on 09/16/15 at 06:47 PM
A round plug of thigh meat with a layer of fat along the top. The fat layer MAY look something like an oyster if you've never seen an oyster, hold it off a couple of arm's lengths and squint.
Posted by Expat47 in Athens, Greece on 09/17/15 at 12:24 AM
Commenting is not available in this channel entry.