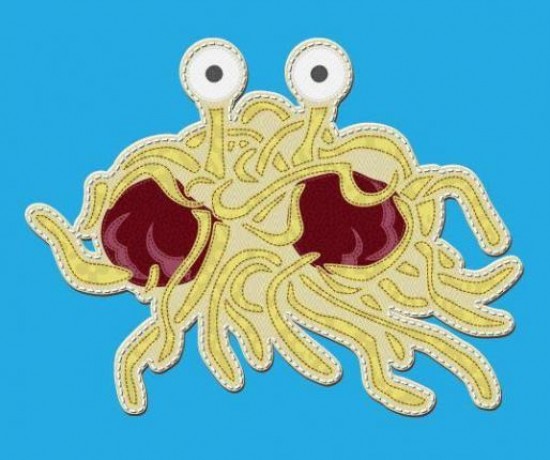 A Federal court judge has ruled that the Church of the Flying Spaghetti Monster is not a valid religion. In fact the judge ruled that the church is a parody, a parody, can you believe it?!? Don't worry true believers, this is just a minor setback. Keep on keeping on folks.


Comments
Those poor pastafarians are being persecuted!!!
Posted by Courtney on 04/14/16 at 08:26 PM
If Al & Jessie can be 'reverends' then why isn't this a religion?

Hay, Judge, how about if we bow to the east a few times a day, will that get us official religion status?


Gosh, looks like they are cooked. Limp defence. No way they can make a flaccidity case now. No doubt the snark following with be stiff on resolve.
Posted by Kehaar on 04/15/16 at 01:14 AM
Do we really want to open up the "validity" argument on religions and apply the scientific method? 'Cause I gotta tell ya judge, that ain't gonna work out well for all of the people who think that a giant man lives in the sky who scoops them up after they die to put them in a perfect city where the streets are paved with gold, they are reunited with all their dead family members and they never get old...
Posted by A Nonny Mouse on 04/15/16 at 10:48 AM
There is a silver lining: maybe we can get the same judge to rule on Scientology.
Posted by TheCannyScot in Atlanta, GA on 04/15/16 at 11:16 AM
I agree with Nonny Mouse. This could open up a can of worms. Many religions (most? All?) have beliefs and doctrines that defy rational explanation and sound weird to outsiders. If FSM adherents want to force the issue, they could challenge many other religions that ARE accommodated by the prison system. This reminds me of the courthouse/city hall Christmas decorations and 10 Commandment displays. In Leesburg, Va., they had to allow competing Christmas displays, which led to a crucified skeleton in a Santa suit, apparently a statement about materialism at Christmas. The FSM folks got involved too, as well as a Luke Skywalker mannequin. This was several years ago, no idea where things stand now.
Posted by Jim on 04/15/16 at 11:57 AM
Mouse: good thing, then, that only fundamentalists and atheists - but I repeat myself - believe that God is that beardy-wishmaster-onna-cloud idiots like Dawkins are so fond of.

As for the Flying Spaghetti Monster: pah. Him, and Cthulhu - I'll take them on both at the same time, and dine on pasta alla marinara!
Posted by Richard Bos on 04/15/16 at 01:25 PM
Appeal ! APPEAL ! This judge is clearly a semolina heathen. Protest march being scheduled; wear your collanders proudly!
Posted by Virtual on 04/15/16 at 05:30 PM
If FSM religion has been declared a non-religion we are all in a pot of hot pasta sauce. The Universal Life Church is next and I will lose my right to marry people, give last rites, bless the unwashed masses and anoint the young maidens with holy wine and caresses. Not to mention the loss of tax free love donations that keep me solvent. Watch out the Unitarian's will be the next. Can't have any fringe religions out there to compete with the big boys.
Posted by Gator Guy on 04/15/16 at 08:16 PM
This does open a door towards Government deciding what is and is not a religion. A very rocky road to a bad place.
Posted by Patty in Ohio, USA on 04/16/16 at 09:37 AM
Commenting is not available in this channel entry.