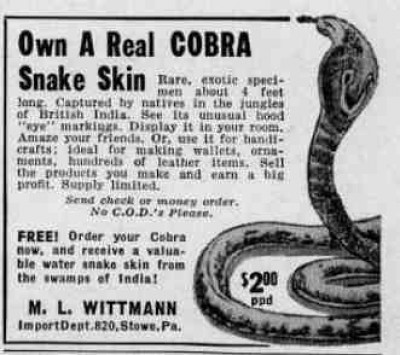 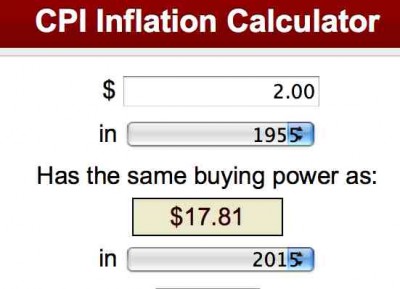 Per some quick and dirty research, some cobras shed their skin 4 to 6 times a year. Just as American kids used to collect discarded bottles and turn them in for the refunds, I suppose some kids in India collected snake skins and sold them to buyers for the wallet/belt/shoe industry. One of those buyers figured he could make more than the usual $1.60 a pound by selling some individually to gullible American kids.
Posted by Phideaux on 01/20/16 at 06:40 PM
Sounds like a plausible economy to me, Phideaux.
Posted by Paul on 01/20/16 at 08:29 PM
Snakes only shed the tough outer layer of their skin, though, the epidermis. If you've ever seen one you'll have noticed that it's whiteish and translucent, not at all the pretty variegated pattern of snakeskin leather. Real snake leather is made of the entire skin and can only be taken off a dead snake; you can't make it from a moulting. So if these people were selling moultings - which they well might have been - they would've disappointed a lot of their customers.
Posted by Richard Bos on 01/22/16 at 03:24 PM
All the snakes we ever had (no cobra's, sorry) only shedded a thin external layer that became brittle after a few days and tore easily.
Posted by GFinKS on 01/25/16 at 12:00 PM