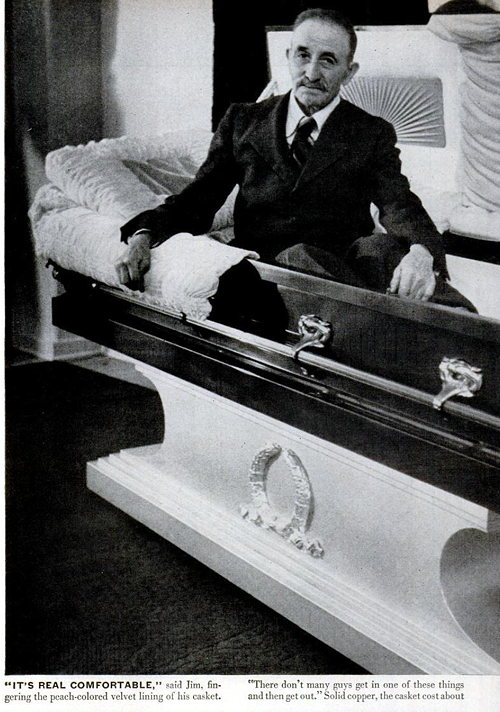 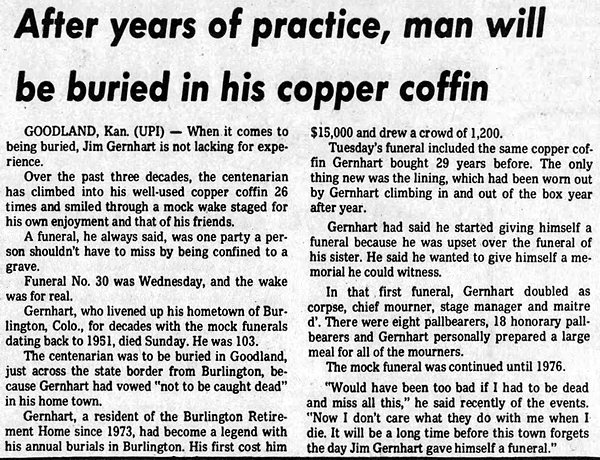 
Comments
Warren LeRuth, probably New Orleans' greatest chef ever, kept his casket in his office and used it for a wine rack.
Posted by Virtual in Carnate on 11/30/21 at 10:11 AM
Funny thing is, at your funeral you’re the only person who doesn’t care what’s going on.
Posted by Brian on 12/01/21 at 08:39 AM
I remember a parody that Johnny Carson did spoofing E.F. Hutton's crop of commercials that had him, as the newly departed, sitting up in the casket when the line "When E.F. Hutton talks, people listen." was intoned. Funniest thing I've ever seen.
Posted by KDP on 12/01/21 at 06:30 PM
I knew this wasn't the first time I'd heard about this kind of thing, but it took awhile for the old noggin's gear to creak over to a solution: in Midsomer Murders (TV Series, 1997-- ), Season 12, Episode 3, titled "Secrets and Spies," one of the characters rehearses his anticipated trip to the crematoria and the service to get everything timed perfectly.

Now I just have to figure out where I'd heard of it prior to that because when I first watched that episode, I remember thinking it wasn't an original idea.
Posted by Phideaux on 12/03/21 at 05:47 PM

@Phideaux: That's a very English telly series. It's really surprising that you've seen any of it. Where did you get that?
Posted by Richard Bos on 12/04/21 at 12:35 PM
@Richard Bos -- I don't remember specifically, but one cable channel or other carried it when nearly new (maybe one season behind it airing in England). These days, it's all over the place. From <JustWatch.com>, after listing the various subscription channels, it includes: "free with ads on Tubi TV, The Roku Channel, Pluto TV, FILMRISE, IMDB TV Amazon Channel." Since remembering that episode, I started binging it again on Tubi.

I wish John Nettles' series "Bergerac" was more readily available. Only the first three seasons are free (IMDbTV). (To go beyond that, you have to pay BritBox and pray they match at least a few of the episodes with the proper Closed Captioning file (but don't get your hopes up, you have better odds playing the lottery than of them getting four in a row right).) It would be nice to watch him progress from lean and fumbly to stout and sly.
Posted by Phideaux on 12/04/21 at 07:41 PM

@Phideaux: you're quite right. Bergerac was great.
Posted by Richard Bos on 12/11/21 at 03:21 PM
Commenting is not available in this channel entry.